The proximity of Veterans Day made me think of the American flag and then, about stars. Astronomers like to think about the properties of stars, including their nuclear burning histories, in order to appreciate how they gave us the life-friendly conditions we enjoy today. Part of that stellar history involves detection of neutral hydrogen in galaxies more than 8 billion light-years away. Now, a team of astronomers has employed an innovative telescope technique to detect this hydrogen, a find that helps us understand star formation history and the conditions conducive to life today.

Observations of Distant Neutral Hydrogen Gas
This lack is understandable given how feeble neutral hydrogen emission is in galaxies located 8–13 billion light-years away. Presently, there is no radio telescope powerful enough to detect neutral hydrogen (even at concentrations tens of times greater than any source in our galaxy) in galaxies more distant than 8 billion light-years. However, researchers have overcome this deficiency thanks to a novel technique developed by a team of five astronomers led by Aditya Chowdhury.

Chowdhury’s team used what’s called a stacking analysis of the individual 21-centimeter radio observations of neutral hydrogen in 7,653 star-forming galaxies located between 9.4 and 6.7 billion light-years away. The observations were recently obtained with the upgraded Giant Metrewave Radio Telescope (near Pune, India), an array of 30 45-meter-diameter (150-foot-diameter) radio telescopes (see figure 1). They stacked the radio spectra of the 7,653 galaxies on top of one another. This stacking enhanced the sensitivity of their observations by the square root of 7,653. That is, they gained a factor of 87.5 times greater detectability of neutral hydrogen. 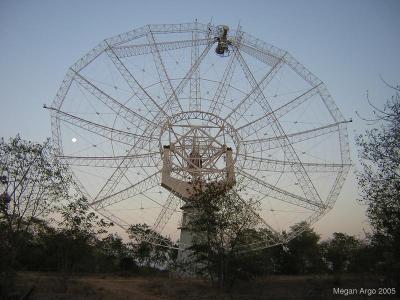 The stacking technique only reveals how much neutral hydrogen gas, on average, resides in the 7,653 galaxies. It gives no information as to where in the galaxies the hydrogen gas resides or where star formation is most aggressively occurring within the galaxies.

Figure 2: Artist’s Impression of One of the Cores of the Square Kilometer Array
Image credit: SKA Project Development Office and Swinburne Astronomy Productions

As astronomers eagerly await the new technique, they celebrate the detection by Chowdhury’s team. It is a breakthrough in understanding how and when hydrogen gas is taken up by galaxies to form stars. The discovery provides concrete evidence that the star formation rates throughout the history of the universe have been fine-tuned to make possible the existence of human beings.

Why Would God Create a World with Parasites?

If God exists and if he is all-powerful, all-knowing, and all-good, why is there so much pain and suffering in the world? This conundrum...
Design

Is Earth’s Terrestrial Biosphere at the Temperature Tipping Point?

For many of us, seeing the words "temperature tipping point" may rouse concern or alarm. For researchers who study Earth's climate, two factors help...
Design

How often have you heard that “the Sun is just an average star?” If you’ve watched many TV documentaries or read introductory astronomy books,...
Design