Big solar flares bring spectacular aurora borealis (northern lights). In my days as the director for observations at the Vancouver chapter of the Royal Astronomical Society of Canada, there were nights when the aurora was so intense and so rapidly moving that it was impossible to do any astronomical observing. We would shut down our telescopes and watch a light and color drama more spectacular than any laser show.

Consequences of a Huge Solar Flare
A really big solar flare has a worldwide impact. On September 1–2, 1859, a solar flare event known as the Carrington Event gave rise to a coronal mass ejection that hit Earth’s magnetosphere.1 The aurora borealis was seen as far south as the Caribbean and the aurora australis (southern lights) was seen as far north as Colombia and Queensland, Australia. The aurora was so bright that it woke up miners in the US Rockies hours before dawn. People in Maine could read newspapers by the aurora’s light.

If such a solar flare event were to happen today, the consequences would be catastrophic to our high-technology civilization. Many of our communication and GPS satellites would be knocked out. Many telephone and electric power grids in North America and Europe would shut down. One study calculated that 20–40 million Americans would be without electricity from 16 days to 2 years.2 The cost to repair the power grids in the contiguous 48 states in today’s dollars would run from 1–3 trillion dollars.3 When I told my sons about the possible loss of GPS systems, cell phone systems, the internet, and radio and television communication, they replied that such an event would be the “end of civilization as we know it.”

Risk of Bigger Solar Flares
Astronomers seek to know how frequently we can expect solar flare events equivalent to, or possibly greater than, the one that occurred in 1859. It is now known that Antarctic and Greenland ice core records cannot be used to determine past solar superflare events.4 For example, the Carrington Event left no signal in the ice cores. However, astronomers determined that the rapid increase in the carbon-14 content observed in tree rings consistent with the year 775 AD could only be explained by a solar superflare event about 5–15 times more energetic than the Carrington Event.5

An exhaustive analysis of the Kepler satellite data by a team of astronomers led by Takuya Shibayama on slowly rotating G-type stars like the Sun reveals that flares at energy levels 20 times greater than the Carrington Event occur at a rate of 1 per 2,000 years per star.6 However, research by a team led by astronomer Christoffer Karoff demonstrates that for the Sun the frequency of such superflares is only about 1 per 20,000 years.7

Harvard University astronomers Manasvi Lingam and Abraham Loeb recently used Kepler satellite data and the best models for the burning history of the Sun to determine the past frequency of even bigger solar flares.8 They showed that solar superflares 200, 2,000, and 20,000 times more energetic than the Carrington Event, including the correction established by Karoff’s team, occur about once every 400 thousand, 8 million, and 200 million years, respectively.9

Consequences of Bigger Solar Flares
A solar flare event as energetic as the one that occurred in 775 AD could shut down the mainland US electric power grid for a year or more. Such a long-term loss of electricity would result in the death or emigration of 80 percent of the US population. (The current US population cannot be sustained without a stable source of electricity.)

The much rarer but much bigger solar superflares considered by Lingam and Loeb would temporarily wipe out Earth’s ozone shield. The resultant high influx of long and short wavelength ultraviolet radiation would devastate phytoplankton, acidify oceans and lakes, raise atmospheric carbon dioxide levels, and bring about severe global warming.

The figure below shows the flaring history for the Sun and for stars of the identical mass as the Sun. The vertical scale is logarithmic. The difference between the Sun’s maximum and minimum flaring activity levels is nearly a factor of a million. 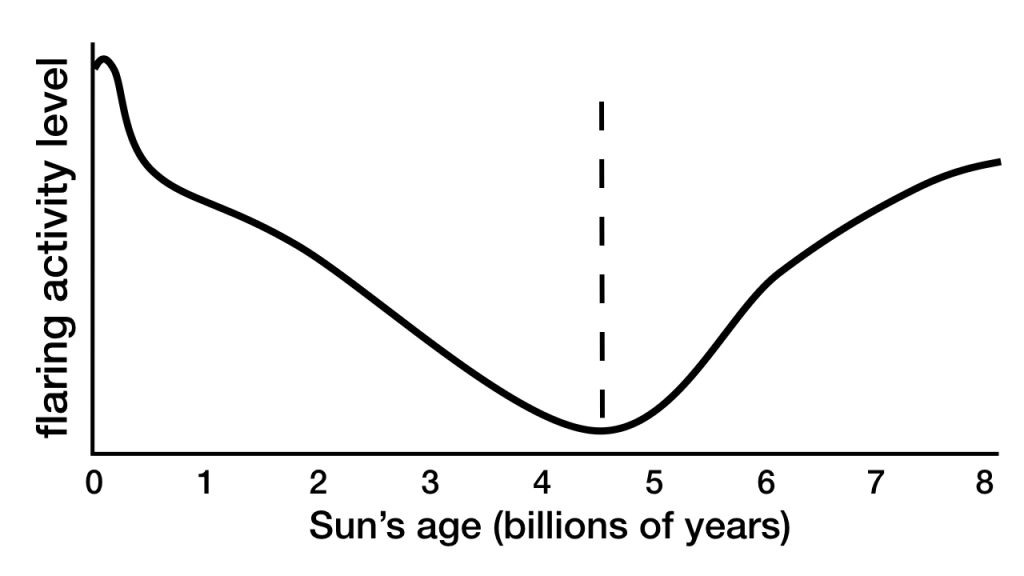 The figure shows that we humans are present on Earth at the optimal solar flaring moment. If God had created us even slightly earlier or later during Earth’s history, we would never have been able to achieve civilization or a high population level.

Explosive Innovations Point to a Creator’s Role in Life’s History. My wife loves to garden. She gets the most pleasure from designing the landscape...
Evolution

A team of European and American conservation biologists has developed the most powerful and comprehensive field evidence to date for a major tenet of...
Evolution