A few days ago, I ran across a BuzzFeed list that catalogs 24 of the most poorly designed things in our time. Some of the items that stood out from the list for me were:

What were people thinking when they designed these things? It’s difficult to argue with BuzzFeed’s list, though I bet you might add a few things of your own to their list of poor designs.

If biologists were to make a list of poorly designed things, many would probably include…everything in biology. Most life scientists are influenced by an evolutionary perspective. Thus, they view biological systems as inherently flawed vestiges cobbled together by a set of historically contingent mechanisms.

Yet as our understanding of biological systems improves, evidence shows that many “poorly designed” systems are actually exquisitely assembled. It also becomes evident that many biological designs reflect an impeccable logic that explains why these systems are the way they are. In other words, advances in biology reveal that it makes better sense to attribute biological systems to the work of a Mind, not to unguided evolution.

Based on recent insights by biochemist and origin-of-life researcher Nick Lane, I would add mitochondria to my list of well-designed biological systems. Lane argues that complex cells and, ultimately, multicellular organisms would be impossible if it weren’t for mitochondria.1 (These organelles generate most of the ATP molecules used to power the operations of eukaryotic cells.) Toward this end, Lane has demonstrated that mitochondria’s properties are just-right for making complex eukaryotic cells possible. Without mitochondria, life would be limited to prokaryotic cells (bacteria and archaea).

To put it another way, Nick Lane has shown that prokaryotic cells could never evolve the complexity needed to form cells with complexity akin to the eukaryotic cells required for multicellular organisms. The reason has to do with bioenergetic constraints placed on prokaryotic cells. According to Lane, the advent of mitochondria allowed life to break free from these constraints, paving the way for complex life.

Through Lane’s discovery, mitochondria reveal exquisite design and logical architecture and operations. Yet this is not necessarily what I (or many others) would have expected if mitochondria were the result of evolution. Rather, we’d expect biological systems to appear haphazard and purposeless, just good enough for the organism to survive and nothing more.

To understand why I (and many evolutionary biologists) would hold this view about mitochondria and eukaryotic cells (assuming that they were the product of evolutionary processes), it is necessary to review the current evolutionary explanation for their origins.

Most biologists believe that the endosymbiont hypothesis is the best explanation for the origin of complex eukaryotic cells. This hypothesis states that complex cells originated when single-celled microbes formed symbiotic relationships. “Host” microbes (most likely archaea) engulfed other archaea and/or bacteria, which then existed inside the host as endosymbionts.

Based on this scenario, there is no real rationale for the existence of mitochondria (and eukaryotic cells). They are the way they are because they just wound up that way.

Lane has discovered that bioenergetics constraints keep bacterial and archaeal cells trapped at their current size and complexity. Key to discovering this constraint is a metric Lane devised called Available Energy per Gene (AEG). It turns out that AEG in eukaryotic cells can be as much as 200,000 times larger than the AEG in prokaryotic cells. This extra energy allows eukaryotic cells to engage in a wide range of metabolic processes that support cellular complexity. Prokaryotic cells simply can’t afford such processes.

An average eukaryotic cell has between 20,000 to 40,000 genes; a typical bacterial cell has about 5,000 genes. Each gene encodes the information the cell’s machinery needs to make a distinct protein. And proteins are the workhorse molecules of the cell. More genes mean a more diverse suite of proteins, which means greater biochemical complexity.

In short, the answer is: mitochondria.

On average, the volume of eukaryotic cells is about 15,000 times larger than that of prokaryotic cells. Eukaryotic cells’ larger size allows for their greater complexity. Lane estimates that for a prokaryotic cell to scale up to this volume, its radius would need to increase 25-fold and its surface area 625-fold.

Because the plasma membrane of bacteria is the site for ATP synthesis, increases in the surface area would allow the hypothetically enlarged bacteria to produce 625 times more ATP. But this increased ATP production doesn’t increase the AEG. Why is that?

The bacteria would have to produce 625 times more proteins to support the increased ATP production. Because the cell’s machinery must access the bacteria’s DNA to make these proteins, a single copy of the genome is insufficient to support all of the activity centered around the synthesis of that many proteins. In fact, Lane estimates that for bacteria to increase its ATP production 625-fold, it would require 625 copies of its genome. In other words, even though the bacteria increased in size, in effect, the AEG remains unchanged. 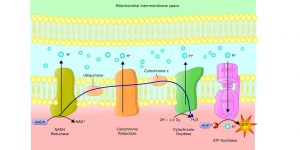 Things become more complicated when factoring in cell volume. When the surface area (and concomitant ATP production) increase by a factor of 625, the volume of the cell expands 15,000 times. To satisfy the demands of a larger cell, even more copies of the genome would be required, perhaps as many as 15,000. But energy production tops off at a 625-fold increase. This mismatch means that the AEG drops by 25 percent per gene. For a genome consisting of 5,000 genes, this drop means that a bacterium the size of a eukaryotic cell would have about 125,000 times less AEG than a typical eukaryotic cell and 200,000 times less AEG when compared to eukaryotes with genome sizes approaching 40,000 genes.

Thanks to mitochondria, eukaryotic cells are free from the bioenergetic constraints that ensnare prokaryotic cells. Mitochondria generate the same amount of ATP as a bacterial cell. However, their genome consists of only 13 proteins, thus the organelle’s ATP demand is low. The net effect is that the mitochondria’s AEG skyrockets. Furthermore, mitochondrial membranes come equipped with an ATP transport protein that can pump the vast excess of ATP from the organelle interior into the cytoplasm for the eukaryotic cell to use.

To summarize, mitochondria’s small genome plus its prodigious ATP output are the keys to eukaryotic cells’ large AEG.

Of course, this raises a question: Why do mitochondria have genomes at all? Well, as it turns out, mitochondria need genomes for several reasons (which I’ve detailed in previous articles).

Other features of mitochondria are also essential for ATP production. For example, cardiolipin in the organelle’s inner membrane plays a role in stabilizing and organizing specific proteins needed for cellular energy production.

From a creation perspective it seems that if a Creator was going to design a eukaryotic cell from scratch, he would have to create an organelle just like a mitochondrion to provide the energy needed to sustain the cell’s complexity with a high AEG. Far from being an evolutionary “kludge job,” mitochondria appear to be an elegantly designed feature of eukaryotic cells with a just-right set of properties that allow for the cellular complexity needed to sustain complex multicellular life. It is eerie to think that unguided evolutionary events just happened to traverse the just-right evolutionary path to yield such an organelle.

As a Christian, I see the rationale that undergirds the design of mitochondria as the signature of the Creator’s handiwork in biology. I also view the anthropic coincidence associated with the origin of eukaryotic cells as reason to believe that life’s history has purpose and meaning, pointing toward the advent of complex life and humanity.

So, now you know why mitochondria make my list.

Fattening up the Case for Intelligent Design

A few days ago while fueling up my car I was “elated” (and by elated, I mean annoyed) to discover that the price of...
Biochemistry

Why These 20 Amino Acids?

Biochemists have long puzzled over the 20 amino acids used to build proteins. Why these specific amino acids?
Biochemistry

The Optimal Design of the Genetic Code