How many are your works, Lord!
In wisdom you made them all;
the earth is full of your creatures.

I don’t remember who pointed out thedarksideofnature Instagram account to me, but their description was intriguing enough that I had to check it out. After perusing a few posts, I ended up adding myself to the list of followers.

I can’t say I enjoy the photos and videos posted by thedarksideofnature—which depict nature “red in tooth and claw”—but I do find them mesmerizing. Their website states that it is “all about showing the world a different side of nature. A side that may not be the prettiest, but it is the realist.”

The posts from thedarksideofnature are a stark reminder of the dichotomy in the animal kingdom, simultaneously beautiful and brutal, highlighting the majesty and the power—and danger—of the world of nature. For many people the beauty, majesty, and power of nature evince a Creator’s handiwork. For others, nature’s brutality serves as justifiable cause for rejecting God’s existence. Why would an all-powerful, all-knowing, and all-good God create a world in which animal pain and suffering appears to be gratuitous?

Perhaps nothing exemplifies the seemingly senseless cruelty of nature more so than the widespread occurrence of filial (relating to offspring) cannibalism and filial abandonment among animals. Many animals eat their young or consume eggs after laying them. Others abandon their young, condemning them to certain death.

What an unimaginably cruel feature of nature. Why would God create animals that eat their offspring or abandon their young?

Is Cruelty in Nature Really Evil?

What if there are good reasons for God to permit pain and suffering to exist in the animal kingdom? Scientific research seems to offer several reasons.

For example, some studies reveal purpose for animal pain and suffering. Others demonstrate that animal death promotes biodiversity and ecosystem stability. There are even studies that provide reasons for filial cannibalism and offspring abandonment (see the Resources section, below). Most recently, a team of investigators from Europe and Australia provide additional reasons why animals would consume their own offspring.1

These researchers didn’t set out to study filial cannibalism. Instead, they sought to understand why the comb jelly, native to the Atlantic coast of North America, has been so successful at colonizing new habitats. For example, this invasive species has made its way into the Baltic Sea, which has longer periods of low food availability compared to the comb jelly’s native habitat. The comb jelly has adapted to the food shortage by engaging in behavior that, at first blush, is counterintuitive and seems to be counterproductive. As it enters into the late season, when the prey field begins to empty, the comb jelly makes a massive investment in reproduction, even though the larval offspring have virtually no chance of survival. In fact, after three weeks the comb jelly progeny stop growing, then shrink in size, and die. 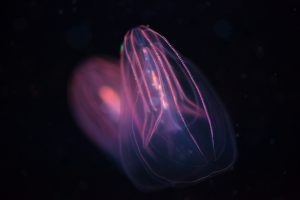 As it turns out, the late season wave of reproduction explains the comb jelly’s success as an invasive species. The researchers learned that the bloom of offspring serve as a food source for the comb jelly adults, replacing the disappearing prey. In other words, as the comb jelly’s available prey begins to decline in number, the jellies reproduce on a large scale with the juveniles serving as a nutrient store that lasts for an additional three weeks beyond the collapse of the prey fields. While this short duration may not seem like much, it affords the comb jelly an opportunity to outcompete other marine life during this window of time, ecologically making the difference between the flourishing and the decline of the species.

Instead of viewing the filial cannibalism among the comb jelly in sinister terms, the investigators found it to be an ingenious design. They argue that the comb jelly population appears to be working together as a single organism. According to research team member Thomas Larsen:

“In some ways, the whole jelly population is acting like a single organism, with the younger groups supporting the adults through times of nutrient stress. Overall, it enables jellies to persist through extreme events and low food periods, colonizing further than climate conditions and other conditions would usually allow.”2

In effect, the filial cannibalism observed for the comb jelly is no different than the autophagy and apoptosis observed in multicellular organisms, in which individual cells are consumed for the overall benefit of the organism.

Filial Cannibalism and the Logical Problem of Evil

Skeptics argue that this final observation about nature is logically incompatible with God’s existence, or, minimally with God’s goodness. In other words, because of natural evil either God doesn’t exist or He isn’t good. Either way, Christian theism is undermined. But what if there is a good reason—as research shows—for pain and suffering to exist in nature? We could modify the syllogism this way:

The God of Skepticism or the God of the Bible?

When considering the problem of natural evil, it is important to distinguish between the God of naturalistic philosophy and the God of the Bible. Though some philosophers may see pain and suffering in the animal realm as a reason to question God’s existence and goodness, the authors of Scripture had a different perspective. They saw animal death as part of the good creation and a reason to praise and celebrate God as Creator and Provider.3 The insights from science about the importance of animal death to ecosystems, and the adaptive value of pain and suffering provide the rationale for calling these features of nature “good.”

All creatures look to you
to give them their food at the proper time.
When you give it to them,
they gather it up;
when you open your hand,
they are satisfied with good things.

When you hide your face,
they are terrified;
when you take away their breath,
they die and return to the dust.
When you send your Spirit,
they are created,
and you renew the face of the ground.

Animal Death and the Problem of Evil

The Argument from Beauty

Does Everyone Have Three Lives?

I’ve enjoyed watching police dramas since childhood. Some of my favorites from the distant past include Streets of San Francisco, Kojak, and Starsky and...
Worldviews

Believing Science and the Bible at the Same Time

The Galileo affair, the Huxley-Wilberforce debate and the Scopes Trial. Many skeptics of the Christian faith often trot out these events to support their...
Philosophy & Ethics

Can New Medical Technology Boldly Go Where No Man Has Gone Before?

When I was in junior high, I would rush home every day after school to tune in to the afternoon reruns of Star Trek....
Philosophy & Ethics