Who says that fictions onely and false hair
Become a verse? Is there in truth no beauty?
Is all good structure in a winding stair?
May no lines passe, except they do their dutie
Not to a true, but painted chair?

I doubt the typical person would ever think fatty acids are a thing of beauty. In fact, most people try to do everything they can to avoid them—at least in their diets. But, as a biochemist who specializes in lipids (a class of biomolecules that includes fatty acids) and cell membranes, I am fascinated by these molecules—and by the biochemical and cellular structures they form.

I know, I know—I’m a science geek. But for me, the chemical structures and the physicochemical properties of lipids are as beautiful as an evening sunset. As an expert, I thought I knew most of what there is to know about fatty acids, so I was surprised to learn that researchers from Germany recently uncovered an elegant mathematical relationship that explains the structural makeup of fatty acids.1 From my vantage point, this newly revealed mathematical structure boggles my mind, providing new evidence for a Creator’s role in bringing life into existence. 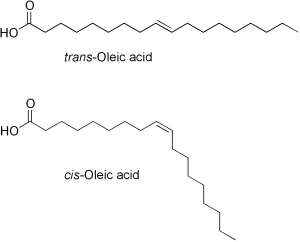 Despite their structural simplicity, a bewildering number of fatty acid species exist. For example, the hydrocarbon chain of fatty acids can vary in length from 1 carbon atom to over 30. One or more double bonds can occur at varying positions along the chain, and the double bonds can be either cis or trans in geometry. The hydrocarbon tails can be branched and can be modified by carbonyl groups and by hydroxyl substituents at varying points along the chain. As the hydrocarbon chains become longer, the number of possible structural variants increases dramatically.

How Many Fatty Acids Exist in Nature?

This question takes on an urgency today because advances in analytical techniques now make it possible for researchers to identify and quantify the vast number of lipid species found in biological systems, birthing the discipline of lipidomics. Investigators are interested in understanding how lipid compositions vary spatially and temporally in biological systems and how these compositions change in response to altered physiological conditions and pathologies.

To process and make sense of the vast amount of data generated in lipidomics studies, biochemists need to have some understanding of the number of lipid species that are theoretically possible. Recently, researchers from Friedrich Schiller University in Germany took on this challenge—at least, in part—by attempting to calculate the number of chemical species that exist for fatty acids varying in size from 1 to 30 atoms.

To accomplish this objective, the German researchers developed mathematical equations that relate the number of carbon atoms in fatty acids to the number of structural variants (isomers). They discovered that this relationship conforms to the Fibonacci series, with the number of possible fatty acid species increasing by a factor of 1.618—the golden mean—for each carbon atom added to the fatty acid. Though not immediately evident when first examining the wide array of fatty acids found in nature, deeper analysis reveals that a beautiful yet simple mathematical structure underlies the seemingly incomprehensible structural diversity of these biomolecules.

This discovery indicates it is unlikely that the fatty acid compositions found in nature reflect the haphazard outcome of an undirected, historically contingent evolutionary history, as many biochemists are prone to think. Instead, the fatty acids found throughout the biological realm appear to be fundamentally dictated by the tenets of nature. It is provocative to me that the fatty acid diversity produced by the laws of nature is precisely the isomers needed to for life to be possible—a fitness to purpose, if you will.

Understanding this mathematical relationship and knowing the theoretical number of fatty acid species will certainly aid biochemists working in lipidomics. But for me, the real significance of these results lies in the philosophical and theological arenas.

The Mathematical Beauty of Fatty Acids

The golden mean occurs throughout nature, describing the spiral patterns found in snail shells and the flowers and leaves of plants, as examples, highlighting the pervasiveness of mathematical structures and patterns that describe many aspects of the world in which we live.

But there is more. As it turns out, we perceive the golden mean to be a thing of beauty. In fact, architects and artists often make use of the golden mean in their work because of its deeply aesthetic qualities.

Everywhere we look in nature—whether the spiral arms of galaxies, the shell of a snail, or the petals of a flower—we see a grandeur so great that we are often moved to our very core. This grandeur is not confined to the elements of nature we perceive with our senses; it also exists in the underlying mathematical structure of nature, such the widespread occurrence of the Fibonacci sequence and the golden mean. And it is remarkable that this beautiful mathematical structure even extends to the relationship between the number of carbon atoms in a fatty acid and the number of isomers.

As a Christian, nature’s beauty—including the elegance exemplified by the mathematically dictated composition of fatty acids—prompts me to worship the Creator. But this beauty also points to the reality of God’s existence and supports the biblical view of humanity. If God created the universe, then it is reasonable to expect it to be a beautiful universe. Yet, if the universe came into existence through mechanism alone, there is no reason to think it would display beauty. In other words, the beauty in the world around us signifies the Divine.

Furthermore, if the universe originated through uncaused physical mechanisms, there is no reason to think that humans would possess an aesthetic sense. But if human beings are made in God’s image, as Scripture teaches, we should be able to discern and appreciate the universe’s beauty, made by our Creator to reveal his glory and majesty.

Is the fictional future of Huxley’s Brave New World becoming a reality? At times it seems that way as scientists rapidly develop the capability...
Biochemistry

When I was a little kid, my dad used to insist I help him work on our family car. I'm sure he saw it...
Biochemistry