In high school I was a bit of a troublemaker. It wasn’t out of the ordinary for me to be summoned to Mr. Reynolds’ office—the school’s vice principal—for some misdeed or other. After a few office visits, I quickly learned the value of a good story. If convincing enough, I could defray the accusations leveled against me. All I had to do was create plausible deniability.

Story Telling in the Evolutionary Paradigm

Storytelling isn’t just the purview of a mischievous kid facing the music in the principal’s office, it is part of the construct of science.

Recent work by a team of scientific investigators from the University of Florida (UF) highlights the central role that storytelling plays in evolutionary biology.1 In fact, it is not uncommon for evolutionary biologists to weave grand narratives that offer plausible evolutionary stories for the emergence of biological or behavioral traits. And, though these accounts seem scientific, they are often unverifiable scientific explanations.

An Evolutionary Just-So Story of Moths and Bats

The traditional evolutionary account of ultrasonic sound detection in nocturnal moths serves as a case in point. Moths (and butterflies) belong to one of the most important groups of insects: lepidoptera. This group consists of about 160,000 species, with nocturnal moths comprising over 75 percent of the group.

Moths play a key role in ecosystems. For example, they serve as one of the primary food sources for bats. Bats use echolocation to help them locate moths at night. Bats emit ultrasonic cries that bounce off the moths and reflect back to the bats, giving these predators the pinpoint location of the moths, even during flight.

Many nocturnal moth species have defenses that help them escape predation by bats. One defense is ears (located in different areas of their bodies) that detect ultrasonic sounds. This capability allows the moths to hear the bats coming and get out of their way.

For nearly a half century, evolutionary biologists explained moths’ ability to hear ultrasonic sounds as the outworking of an “evolutionary arms race” between echolocating bats and nocturnal moths. Presumably, bats evolved the ability to echolocate, allowing them to detect and prey upon moths at night by plucking them out of the air in mid-flight. In response, some groups of moths evolved ears that allowed them to detect the ultrasonic screeches emitted by bats, helping them to avoid detection. 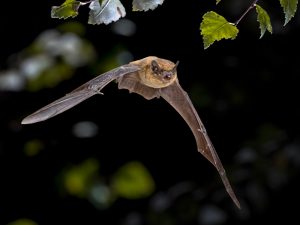 For 50 years, biologists have studied the relationship between echolocating bats and nocturnal moths with the assumption that this explanation is true. (I doubt Mr. Reynolds ever assumed my stories were true.) In fact, evolutionary accounts like this one provide evidence for the idea of coevolution. Advanced by Paul Ehrlich and Peter Raven in 1964, this evolutionary model maintains that ecosystems are shaped by species that affect one another’s evolution.

If the UF team’s work is to be believed, then it turns out that the story recounting the evolutionary arms race between nocturnal moths and echolocating bats is fictional. As team member Jesse Barber, a researcher who has studied bats and moths, complains, “Most of the introductions I’ve written in my papers [describing the coevolution of bats and moths] are wrong.”2

An Evolutionary Study on the Origin of Moths and Butterflies

To reach this conclusion, the UF team generated the most robust evolutionary tree (phylogeny) for lepidopterans to date. They also developed an understanding of the timing of events in lepidopteran natural history. They were motivated to take on this challenge because of the ecological importance of moths and butterflies. As noted, these insects play a central role in terrestrial ecosystems all over the world and coevolutionary models provide the chief explanations for their place in these ecosystems. But, as the UF researchers note, “These hypotheses have not been rigorously tested, because a robust lepidopteran phylogeny and timing of evolutionary novelties are lacking.”3

To remedy this problem, the researchers built a lepidopteran evolutionary tree from a data set of DNA sequences that collectively specified 2,100 protein-coding genes from 186 lepidopteran species. These species represented all the major divisions within this biological group. Then, they dated the evolutionary timing of key events in lepidopteran natural history from the fossil record.

Based on their analysis, the research team concluded that the first lepidopteran appeared around 300 million years ago. This creature fed on nonvascular plants. Around 240 million years ago, lepidopterans with tubelike proboscises (long, sucking mouthpiece) appeared, allowing these insects to extract nectar from flowering plants.

These results cohere with the coevolutionary model that the first lepidopterans fed internally on plants and, later, externally, as they evolved the ability to access nectar from plants. Flowering plants appear around 260 million years ago, which is about the time that the tubelike proboscis appears in lepidopterans.

But perhaps the most important and stunning finding from their study stems from the appearance of hearing organs in moths. It looks as if these organs arose independently 9 separate times—around 80 to 90 million years ago—well before bats began to echolocate. (The earliest known bat from the fossil record with the capacity to echolocate is around 45 to 50 million years old.)

The UF investigators uncovered another surprising result related to the appearance of butterflies. They discovered that butterflies became diurnal (active in the daytime) around 98 million years ago. According to the traditional evolutionary story, butterflies (which are diurnal) evolved from nocturnal moths when they transitioned to daytime activities to escape predation of echolocating bats, which feed at night. But as with the origin of hearing organs in moths, the transition from nocturnal to diurnal behavior occurred well before the first appearance of echolocating bats and seems to have occurred independently at least two separate times.

It Just Isn’t So

The UF evolutionary biologists’ study demonstrates that the coevolutionary models for the origin of hearing organs in moths and diurnal behavior of butterflies—dominant for over a half century in evolutionary thought—are nothing more than just-so stories. They appear to make sense on the surface but are no closer to the truth than the tales I would weave in Mr. Reynolds’ office.

In light of this discovery, the research team posits two new evolutionary models for the origin of these two traits, respectively. Now scientists think that the evolutionary emergence of hearing organs in moths may have provided these insects the capacity for auditory surveillance of their environment. Their capacity to hear may have helped them detect the low-frequency sounds of flapping bird wings, for example, and avoid predation. Presumably, these same hearing organs later evolved to detect the high-frequency cries of bats. As for the evolutionary origin of diurnal behavior characteristic of butterflies, researchers now speculate that butterflies became diurnal to take advantage of flowers that bloom in the daytime.

Again, on the surface, these explanations seem plausible. But one has to wonder if these models, like their predecessors, are little more than just-so stories. In fact, this study raises a general concern: How much confidence can we place in any evolutionary account? Could it be that other evolutionary accounts are, in reality, good stories, but in the end will turn out to be just as fanciful as the stories written by Rudyard Kipling?

In and of itself, recognizing that many evolutionary models could just be stories doesn’t provide sufficient warrant for skepticism about the evolutionary paradigm. But it does give pause for thought. Plus, two insights from this study raise real concerns about the capacity of evolutionary processes to account for life’s history and diversity:

Evolutionary biologists use the term convergence to refer to the independent origin of identical or nearly identical biological and behavioral traits in organisms that cluster into unrelated groups.

Convergence isn’t a rare phenomenon or limited to the independent origin of hearing organs in moths and diurnal behavior in butterflies. Instead, it is a widespread occurrence in biology, as evolutionary biologists Simon Conway Morris and George McGhee document in their respective books Life’s Solution and Convergent Evolution. It appears as if the evolutionary process routinely arrives at the same outcome, time and time again.4 In fact, biologists observe these repeated outcomes at the ecological, organismal, biochemical, and genetic levels.

Convergence Should Be Rare, Not Widespread

In effect, chance governs biological and biochemical evolution at its most fundamental level. Evolutionary pathways consist of a historical sequence of chance genetic changes operated on by natural selection, which, too, consists of chance components. The consequences are profound. If evolutionary events could be repeated, the outcome would be dramatically different every time. The inability of evolutionary processes to retrace the same path makes it highly unlikely that the same biological and biochemical designs should appear repeatedly throughout nature.5

In support of this view, consider a 2002 landmark study carried out by two Canadian investigators who simulated macroevolutionary processes using autonomously replicating computer programs. In their study, the computer programs operated like digital organisms.6 The programs could be placed into different “ecosystems” and, because they replicate autonomously, they could evolve. By monitoring the long-term evolution of these digital organisms, the two researchers determined that evolutionary outcomes are historically contingent and unpredictable. Every time they placed the same digital organism in the same environment, it evolved along a unique trajectory.

In other words, given the historically contingent nature of the evolutionary mechanisms, we would expect convergence to be rare in the biological realm. Yet, biologists continue to uncover example after example of convergent features—some of which are quite astounding.

Biologists have discovered one such example of convergence in the origin of echolocating bats. Echolocation appears to have arisen two times independently: once in microbats and once in Rhinolophidae, a superfamily of megabats.7 Prior to this discovery, reported in 2000, biologists classified Rhinolophidae as a microbat based on their capability to echolocate. But DNA evidence indicates that this superfamily has greater affinity to megabats than to microbats. This result means that echolocation must have originated separately in the microbats and Rhinolophidae. Researchers have also shown that the same genetic and biochemical changes occurred in microbats and megabats to create their echolocating ability. These changes appear to have taken place in the gene prestin and in its protein-product, prestin.8

In other words, we observe two outcomes: (1) the traditional evolutionary accounts for coevolution among echolocating bats, nocturnal moths, and diurnal butterflies turned out to be just-so stories, and (2) the convergence observed in these three groups stands as independent and separate instances of failed predictions of the evolutionary paradigm.

If the widespread occurrence of convergence can’t be explained through evolutionary theory, then how can it be explained?

It is not unusual for architects and engineers to redeploy the same design features, sometimes in objects, devices, or systems that are completely unrelated to one another. So, instead of viewing convergent features as having emerged through repeated evolutionary outcomes, we could understand them as reflecting the work of a divine mind. From this perspective, the repeated origins of biological features equate to the repeated creations by an intelligent Agent who employs a common set of solutions to address a common set of problems facing unrelated organisms.

Now that’s a story even Mr. Reynolds might believe.

When Charles Darwin advanced his theory of evolution, he knew the fossil record didn’t offer much support for his idea. Two of its features...
Evolution

A common skeptical objection to Christian apologetics is that theists engage in a god-of-the-gaps form of reasoning.
Evolution