Our family has started a new tradition: end-of-the-school-year blowouts. A few weeks ago we left on the first day of summer vacation for the Grand Canyon. 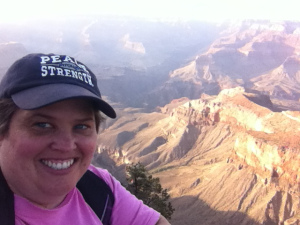 None of us had ever seen this natural wonder so we were all very excited to go. Sure, we’d seen it in pictures and on The Brady Bunch (which surprisingly was part of our inspiration for the trip in the first place). But seeing the Grand Canyon with our own eyes was a totally different level of ah-mazing. Here is a selfie of my first glimpse of the canyon. This arresting spectacle brought my dear husband to tears with awe.

One motivation for our trip was that our 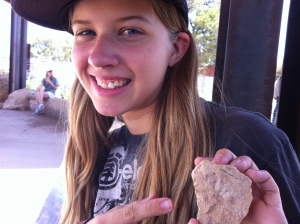 teenage daughter is a rock hound. I think she might have enough rocks lingering in her room to build a small monument. She also has her very own pickax to split them open (while wearing safety glasses, of course). She had a great time at the canyon rock and fossil hunting.

After working at RTB for 15 years, I’ve heard a lot about the Grand Canyon, but mostly as it relates to young-earth creationists giving tours down the Colorado River. The canyon is frequently put forth as alleged evidence for a recent, global flood. Candidly speaking, however, I didn’t even have a firm grasp of the conventional explanation for how the canyon was formed.

Thankfully, the National Park Service offers an abundance of opportunities to learn and explore. For much of the canyon’s history, it was underwater. During that time many of the layers of strata were formed. What we see now is the remaining erosion after the ancient waters receded. 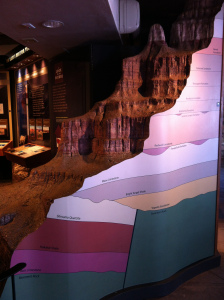 This display in one of the museums caught my attention. It is a graphic depiction of the various layers that spread across the canyon.

When I saw this, I just had to stand back in awe for a moment to take in the sheer majesty of the message of this display. The complexity of the canyon’s history is told in its rocks, its strata, and fossils.

Going to the Grand Canyon was sheer bliss as my family drank in all it had to offer. As we walked through the museums and read the explanatory plaques, I noticed that my kids kept checking in with me and inquiring whether it was OK to accept what they were learning. Finally, I made a blanket statement: “This is God’s creation. Let’s just focus on being curious.”

This trip reinforced to me how important it is to promote curiosity about creation in our children. Sometimes, as Christians, our persistent resistance to biological evolution can really zap the fun out of learning science. Kids pick up on their parents’ hesitation, even if it’s unspoken. However, when we can embrace the spirit of discovery, and leave behind the OEC vs. YEC or creation vs. evolution debates, it translates into empowering the next generation to be curious about God’s creation.

See some more of our family’s pictures from the Grand Canyon.

Getting to Know You: An Interview with Dr. Patricia Fanning, Part 1 (of 2)

We appreciate the need for fresh insight on the science-faith relationship from experts in disciplines not covered by our own awesome quartet of scholars....

With the arrival of the new year, new things are afoot. And one of the new creations at Reasons to Believe is a web...

Often, the most divisive climate change issues have more to do with climate policy rather than with the changing climate itself. This article attempts...