When my oldest child, Sarah (now 24 years old), was a toddler she loved to push the buttons on the keyboard of my very first computer. While I was working on the computer, she would come up to me and ask: “Daddy, push one button?” I would acquiesce to her wishes and then watch as her little fingers pecked away at the keys.

I had no idea then that my daughter was actually engaging in early vocational training. Today she works as a professional court reporter-closed captioner.

Sarah’s occupational tasks boggle my mind. She must listen to the spoken word and then translate it instantaneously into readable text on a screen via her shorthand steno machine—which looks more like a piano than a computer keyboard! (But, then again, I must remember that I nicknamed her “Sarah-Bellum” during her elementary school days.) 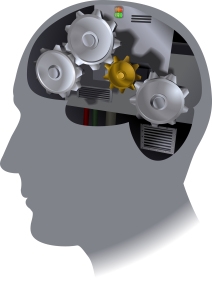 But it’s more than just Sarah’s proud father who is amazed by what goes on in the brain-mind of a court reporter-closed captioner. On the Neeson & Associates blog, court reporter Kimberley Neeson refers to a neuropsychologist’s testimony in a U.S. federal court.

Using stenography as an example, the neuropsychologist explains the complexity of the human brain, “Our brains are a miracle….And if you look at the court reporter right now, as an example, okay, this is a miracle in progress happening right before your eyes.”

Considering all that a stenographer must do, it’s no wonder the neuropsychologist insists, that “no technology could replace the beauty of that brain and the miracle of that brain.”1

Abductive Reasoning: Inference to the Best Explanation of the Human Brain-Mind

So what is the best explanation for the origin of the “miracle” human brain-mind as illustrated in the amazing work of the court reporter?

If we adopt the worldview of atheistic naturalism, then we must conclude that the conscious mind of human beings (with capacities such as those happening in the stenographer’s brain-mind) ultimately came from a source that is, in and of itself, mindless and nonconscious. So, given naturalism, the natural cause of a human’s mind, personhood, reason, and conscious awareness itself lacked all of these profound qualities. In other words, we, the personally conscious, can reflect back upon the nonpersonal, nonconscious universe, but it cannot reflect upon us. We can know the cosmos in a way that it cannot know us—making the effect exponentially greater than its cause.

One can see why the attempt to explain personal self-awareness from a naturalistic perspective has been called “the intractable problem of consciousness.” Naturalistic philosophers of the mind admit candidly they have no idea how personal consciousness emerged from nonconscious matter.2 It is safe to say that consciousness is not an easy fit in the world of naturalism.

If God exists, then the primary thing that exists is itself a conscious mind of unlimited power and intellect. This mind has its own first-person perspective, and it can think about things. The notion that such a mind, if it creates anything, would create other conscious minds that have their own first-person perspectives and can think about things is not a great mystery.3

While naturalism faces “the hard problem of consciousness,”4 theism anticipates self-conscious awareness as a common feature. (This reasoning constitutes something more substantial than a god-of-the-gaps conclusion. Rather, it is an inference drawn from the worldview that fits better with the available and sufficient data, and, thus, the greater explanatory power.)

A Proud and Thankful Father

My daughter’s amazing skill as a stenographer makes me both proud and thankful. I’m proud of my daughter’s diligence and effort in accomplishing her career goal and also thankful to our Creator for gifting her mind in the first place.

A Critical Reflection on Adam and the Genome, Part 1

Who doesn’t like a bargain? I sure do. And I am a sucker for 2-for-1 specials. For those interested in science-faith discussions, the recent...
Design

How about Reading Some Christian Classics? Part 1

Only human beings read. And from a biblical perspective, it may be reasonably inferred that humans’ capacity to read is part of the intellectual...
Education

Piltdown Man: The Fact and Fantasy of the Hominid Fossil Record

In high school and college, I played my fair share of practical jokes. While a few of the victims of my hoaxes appreciated my...
Human Origins & Anthropology