Sedona, Arizona, should be on your short list of places to visit if you haven’t been there already. Stunning sandstone formations—especially at sunrise or sunset—and easy access to them will keep your camera busy. 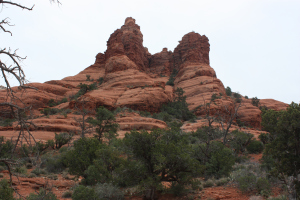 My family and I visited Red Rock Country recently and, according to a brochure I picked up at the visitors’ center, 61 percent of visitors (out of 2–4 million annually) cite “spiritual healing” as a reason for coming to Sedona. Given the power of suggestion and by defining healing loosely, it’s easy to see how that percentage could be so high. (For that matter, even my wife and I could say we went to Sedona looking for healing. Of course, we wouldn’t have taken the kids along if this were true.) But I think what most people have in mind is more than the rejuvenation that comes from a leave-the-stress-at-home vacation.

With maps leading to “vortex sites,” shops selling healing stones (among other baubles), and spiritual advisors and practitioners of every stripe, there’s no shortage of spirituality in this town of 10,000. The New Age movement hit back in the 1980s and never looked back. Proprietors of a UFO store, perhaps more profit-driven than most, captured my attention with their many amusing signs. 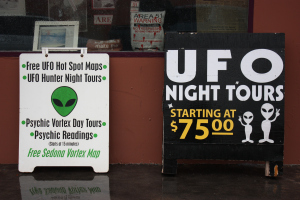 Keep that 61 percent in mind for a moment as we consider an atheistic contention that religious expression (in particular, Christianity) is an evolutionary coping mechanism that, in an enlightened age, is now fit only for the weak-minded. In fact, a recent study suggested that religion may become extinct in nine nations. That’s a subject for a different post, but some of the countries in the report are also among those listed on adherents.com’s “Top 50 Countries with Highest Proportion of Atheists/Agnostics.” So, there’s not much of a surprise there, but I’d be interested in statistics for countries like China, Russia, and India, or continents like Asia and Africa.

Here’s where I’m going with this: Doesn’t the Sedona experience—and many others like it (Mt. Fuji, Mt. Shasta, other great nature sites)—validate a scriptural passage like Romans 1:25 that says: “They exchanged the truth of God for a lie, and worshiped and served created things rather than the Creator—who is forever praised. Amen.”?

Granted, this is a small slice of the landscape, but if the Bible is a human-crafted work, it would seem that consistencies of this kind would be fewer as time progressed and humans became more sophisticated. Instead, one can point to a proliferation of religions or generalized spirituality that fit the biblical description. Think of the burgeoning groups under the common rubric of “going green,” that smack of “creation worship” (creation care or stewardship is a different post; we won’t go there this time) and why there seem to be more and more of them.

Maybe it’s just a revival of paganism and I don’t see it. I’m an Average Joe, after all. Does all this generic spirituality bolster the Scriptures while giving a shin splint to an atheistic argument that the Bible is a mythical book? What do you think?

Resource: Lights in the Sky and Little Green Men

The weekend following Thanksgiving, my husband and I decked the halls of our apartment with wreaths, garland, and a Nativity scene. And next week,...
Theology

A Dozen Evidences for the Resurrection of Jesus

What in the World Is a Worldview?

Everybody has one. Whether they’re educated or uneducated, liberal or conservative, rich or poor, nonbelieving or God-fearing, all people act and live according to...
Worldviews