As I sit down at my computer to compose this post, the new Justice League movie has just hit the theaters. Even though it has received mixed reviews, I can’t wait to see this latest superhero flick. With several superheroes fighting side-by-side, it begs the question: “Who is the most powerful superhero in the DC universe?”

I’m not sure how you would respond, but in my opinion, it’s not Superman or Wonder Woman. Instead, it’s a superhero that didn’t appear in the Justice League movie (but he is a longtime member of the Justice League in the comic books): the Martian Manhunter.

Originally from Mars, J’onn J’onzz possesses superhuman strength and endurance, just like Superman. He can fly and shoot energy beams out of his eyes. But, he also has shapeshifting abilities and is a powerful telepath. It would be fun to see Superman and the Martian Manhunter tangle. My money would be on J’onn J’onzz because of his powerful telepathic abilities. As a telepath, he can read minds, control people’s thoughts and memories, create realistic illusions, and link minds together. 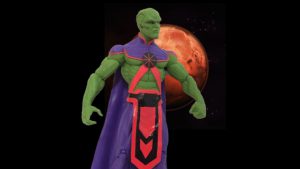 Even though it is fun (and somewhat silly) to daydream about superhuman strength and telepathic abilities, recent work by Spanish neuroscientists from the Basque Center on Cognition, Brain, and Language indicates that mere mortals do indeed have an unusual ability that seems a bit like telepathy. When we engage in conversations with one another—even with strangers—the electrical activities of our brains synchronize.1 In part, this newfound ability may provide the neurological basis for the theory of mind and our capacity to form complex, hierarchical social relationships, properties uniquely displayed by human beings. In other words, this discovery provides more reasons to think that human beings are exceptional in a way that aligns with the biblical concept of the image of God.

Most brain activity studies focus on individual subjects and their responses to single stimuli. For example, single-person studies have shown that oscillations in electrical activity in the brain couple with speech rhythms when the test subject is either listening or speaking. The Spanish neuroscientists wanted to go one step further. They wanted to learn what happens to brain activities when two people engage one another in a conversation.

To find out, they assembled 15 dyads (14 men and 16 women) consisting of strangers who were 20–30 years in age. They asked the members of each dyad to exchange opinions on sports, movies, music, and travel. While the strangers conversed, the researchers monitored electrical activities in the brains using EEG technology. As expected, they detected coupling of brain electrical activities with the speech rhythms in both speakers and listeners. But, to their surprise, they also detected pure brain entrainment in the electrical activities of the test subject, independent of the physical properties of the sound waves associated with speaking and listening. To put it another way, the brain activities of the two people in the conversation became synchronized, establishing a deep connection between their minds.

Brain Synchronization and the Image of God

The notion that human beings differ in degree, not kind, from other creatures has been a mainstay concept in anthropology and primatology for over 150 years. And it has been the primary reason why so many people have abandoned the belief that human beings bear God’s image. Yet, this stalwart view in anthropology is losing its mooring, with the concept of human exceptionalism taking its place. A growing minority of anthropologists and primatologists now believe that human beings really are exceptional. They contend that human beings do, indeed, differ in kind, not merely degree, from other creatures, including Neanderthals. Ironically, the scientists who argue for this updated perspective have developed evidence for human exceptionalism in their attempts to understand how the human mind evolved. But, instead of buttressing human evolution, these new insights marshal support for the biblical conception of humanity.

As human beings, we effortlessly represent the world with discrete symbols. We denote abstract concepts with symbols. And our ability to represent the world symbolically has interesting consequences when coupled with our abilities to combine and recombine those symbols in a countless number of ways to create alternate possibilities. Our capacity for symbolism manifests in the form of language, art, music, and even body ornamentation. And we desire to communicate the scenarios we construct in our minds with other human beings.

But there is more to our interactions with other human beings than a desire to communicate. We want to link our minds together. And we can do this because we possess a theory of mind. In other words, we recognize that other people have minds just like ours, allowing us to understand what others are thinking and feeling. We also have the brain capacity to organize people we meet and know into hierarchical categories, allowing us to form and engage in complex social networks.

In effect, these qualities could be viewed as scientific descriptors of the image of God.

It is noteworthy that all four of these qualities are on full display in the Spanish neuroscientists’ study. The capacity to offer opinions on a wide range of topics and to communicate our ideas with language reflects our symbolism and our open-ended generative capacity. I find it intriguing that the oscillations of our brain’s electrical activity couples with the rhythmic patterns created by speech—suggesting our brains are hard-wired to support our desire to communicate with one another symbolically. I also find it intriguing that our brains become coupled at an even deeper level when we converse, consistent with our theory of mind and our capacity to enter into complex social relationships.

Even though many people in the scientific community promote a view of humanity that denigrates the image of God, common-day experience continually supports the notion that we are unique and exceptional as human beings. But, for me, I find it even more gratifying to learn that scientific investigations into our cognitive and behavioral capacities continue to affirm human exceptionalism and, with it, the image of God. Indeed, we are the crown of creation.

Are human beings exceptional? Are we unique, as the Bible teaches? Recent work by paleoanthropologists from Australia adds to the mounting scientific evidence for...
Human Origins & Anthropology

Our last article reviewed uses of the words kabash (“subdue”) and radah (“rule”) in the Old Testament beyond Genesis 1. In all cases, they...
Human Origins & Anthropology

“Welcome Back, My Friends, to the Show that Never Ends”

Charles Darwin carefully side stepped the question of human origins in On the Origin of Species. But he wrote about it in detail in...
Human Origins & Anthropology