With Zika virus featuring so prominently in the news, there is a growing concern among people about its rapid spread. And with its connections to harmful disorders like microcephaly, some are asking why God would create such a virus. How concerned should we actually be? Is there a place for viruses in God’s good creation?

How Dangerous Is Zika Virus?

First isolated in 1947 from monkeys in the Zika forest of Uganda, epidemiological studies reveal its slow spread (see figure 1) through Africa, Southeast Asia, and across islands in the Pacific to its recent introductions in Haiti (2013) and Brazil (2014).1 The World Health Organization (WHO) declared Zika virus a Public Health Emergency of International Concern in February 2016, raising the alarm due to its rapid spread through the immunologically naïve population of the Americas since the first reported case in Brazil in May 2015.2

An estimated 4 million people are at risk of Zika infection in the Americas.3 However, only about one in five persons infected with Zika virus develop symptoms. The majority of these symptoms are mild (fever, rash, joint and muscle pain, headache, and conjunctivitis) and resolve within 7–10 days. So why is there so much concern about the spread of a relatively mild infection? Although rare, some cases of Zika have been reported indicating hemorrhagic discharge and thrombocytopenia. The real concern stems from the apparent risk for pregnant women and especially their unborn children.

Zika virus is transmitted primarily through mosquito bites but can also be transmitted sexually.4 The serious outbreak of Zika virus infections in Brazil correlates with increased reports of Guillain-Barré syndrome (GBS) and microcephaly (both pathologies are due to perturbation of normal neural development and/or function).5Confirmed cases of microcephaly show a link to Zika virus infections of the mothers during pregnancy and are much higher in epidemic areas than historical levels. Infection rates for children in utero have been roughly estimated at 1–29 percent. Studies currently underway by the Centers for Disease Control and Prevention (CDC) and Brazilian Health Ministry hope to narrow the reported risk.6

What Can Be Done to Prevent Zika Virus Infections?

Since Zika virus is carried by Aedes mosquitoes, the best thing to do is to restrict travel to infected areas in order to avoid exposure to infected mosquitoes. However, many people are planning to travel to Brazil for the Olympics this summer. So what do you do if you live in an area or will be traveling to an area where Zika virus is present? Avoid exposure to mosquitoes in infected areas by wearing repellent and long-sleeved pants and shirts, staying indoors, and using air-conditioning to cool rooms (rather than open windows).7

Zika infections may also result when infected men return to uninfected areas and transmit the virus through sexual intercourse. The CDC recommends that male travelers returning from Zika virus-infected areas avoid having unprotected sex for up to six months (or longer if the partner is pregnant) as Zika virus can persist in the sperm of an infected man for over two months.

Since no vaccine or treatment exists for Zika virus infections, control of mosquito populations in infected areas is the primary preventative intervention. Genetically modified Aedes aegypti mosquitoes may help reduce the mosquito population, and this method of population control is likely much safer than widespread chemical spraying. Also, removing containers that allow water to collect and remediating pooled water reduces mosquito breeding grounds and has been shown to be effective in controlling local mosquito populations.

Although the United States has not had any reported cases of local vector-borne infections, nearly 500 cases have been imported to the United States by those traveling to infected areas and returning home (see figure 2). As of the first week of May 2016, at least 44 pregnant women in the United States have been infected, and at least 10 sexually transmitted cases and one confirmed case of GBS have been reported.8 The US territories of Puerto Rico, the Virgin Islands, and American Samoa are reporting higher numbers of local vector-borne infections and disease. The CDC and National Institutes of Health (NIH) have asked Congress to increase research funding for Zika virus by $1.9 billion to support vector-control studies, fast-tracking vaccine development, and safety trials.9 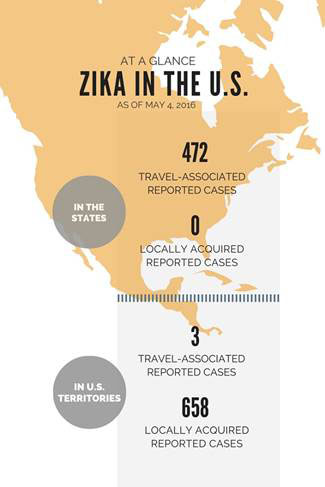 Figure 2: Zika in the United States
Image credit: information from Centers for Disease Control and Prevention

Why Would God Create Viruses and Mosquitoes?

Many people ask, “Why not just wipe out mosquitoes through genetic modification or other interventions like chemical spraying?” There are over 3,500 different species of mosquitoes. Of these, only 200 or so species bite humans. And mosquitoes are critical to many ecological cycles. As adults, they serve as pollinators and food for many different types of birds, amphibians, and other insects. And as larvae, they serve as food for many different kinds of fish and amphibians. So to wipe out mosquitoes would have horrific widespread ecological consequences. But couldn’t we just wipe out Aedesmosquitoes, or the 200 species that harass humans? Until we know the effects of wiping out even one species, to do so would not demonstrate good stewardship of creation. Until we learn more, we need to proceed with caution before driving any species to extinction.10

Others ask, “Why would God create viruses like the Zika virus?” This is the kind of question I have been asking since my graduate school days when I was immersed in studying human pathogens.

Historically, we have discovered viruses because we have observed diseased or dying organisms (e.g., birds, plants, animals, and people) and asked, “What is causing this disease?” It’s easy to view these types of viruses as bad and perhaps as by-products of the fall. But the reality we are just beginning to discover is that there are far more viruses than we ever imagined. And the overwhelming majority of these viruses do not cause disease in humans, animals, or plants. In fact, viruses critically contribute to maintaining the biogeochemical cycles on Earth.

Several viruses are also being harnessed as tools to combat diseases such as cancer, virus infections, antibiotic-resistant bacterial diseases, and, possibly in the not too distant future, even genetic or congenital diseases through gene-editing. Viruses are also useful in helping to protect food and crops from bacterial infections and loss. With this new and expanding understanding of viruses, it is easy to see how a good God providentially balances creation, sustains life, and provides us with tools to combat human disease and suffering, expand crop production, and steward creation in other beneficial ways.

I love listening to live blues music. One of my favorite venues is the Canyon Club in Agoura Hills, CA, about an hour and...
Biology

Why Is That Goat Staring at Me?

As God-ordained stewards of creation, we have an ability not only to care for animals and pets but also to form relational bonds with...
Biology

The Logic of DNA Replication Makes a Case for Intelligent Design