Biochemists from Oxford University recently demonstrated that unitary pseudogenes play a role in regulating gene expression. This advancement means the presence of shared unitary pseudogenes no longer demands an evolutionary interpretation. They can be understood as common design features in the genomes of humans and the great apes (and other organisms). In part one of this two-part series, I will provide the context for this exciting discovery. In part two, I will describe the work of the Oxford scientists and its implications for the creation-evolution controversy.

Town and court criers gain the attention of a crowd by calling out “Oyez! Oyez! Oyez!” (akin to the cry “Hear ye!”) before announcing official proclamations, news, and even advertisements. In this same vein, I proclaim that researchers from Oxford University have discovered that unitary pseudogenes play a role in regulating gene expression.1 Oyez! Oyez! Oyez!

This discovery provides some of the first evidence in support of the recently proposed competitive endogenous RNA (ceRNA) hypothesis. This model seeks to provide a unifying framework to explain how long noncoding RNA molecules and the RNA transcripts of genes and pseudogenes work together to form regulatory networks that control gene expression.2 If this hypothesis is correct, it will usher in a new theoretical framework for understanding RNA’s role inside the cell. It also provides, perhaps unintentionally, the first bona fide explanation from a design/creation model perspective for why genomes contain unitary pseudogenes.

Up until this discovery, evolutionary biologists maintained that identical (or nearly identical) unitary pseudogene sequences found in the human genome and in corresponding locations in great apes’ genomes provide compelling evidence that humans and chimpanzees must have evolved recently from a shared ancestor. With this advance, shared unitary pseudogenes no longer demand an evolutionary interpretation—they can be understood instead as common designfeatures.

To fully appreciate the significance of this discovery—for both molecular biology and scientific apologetics—some background information is in order.

The Central Dogma of Molecular Biology

Long regarded as the organizing concept for molecular biology, the central dogmadescribes how the information stored in DNA becomes functionally expressed through the amino acid sequence and activity of proteins.

The polynucleotide DNA stores the information necessary to make all the proteins used by the cell. The sequence of nucleotides (genes) that make up the DNA strands specifies the sequence of amino acids that make up the polypeptide chains of proteins. However, DNA does not specify the synthesis of protein chains directly. Rather, the cellular machinery copies the gene’s sequence by assembling messenger RNA(mRNA). A single-stranded molecule, mRNA is similar but not identical in composition to DNA. Scientists refer to the process of copying mRNA from DNA as transcription.

Once assembled, mRNA migrates from the nucleus of the cell into the cytoplasm. At the ribosome, mRNA directs the synthesis of proteins by employing an elaborate process called translation.

Pseudogenes and the Case for Biological Evolution

Evolutionary biologists recognize pseudogenes as the dead, useless remains of once-functional genes. According to this view, severe mutations destroyed the capacity of the cell’s machinery to “read” and process the information contained in these genes. Despite the fact that they are nonfunctional, pseudogenes possess the telltale signature that allows molecular biologists to recognize them as genes. Three distinct classes of pseudogenes have been identified. 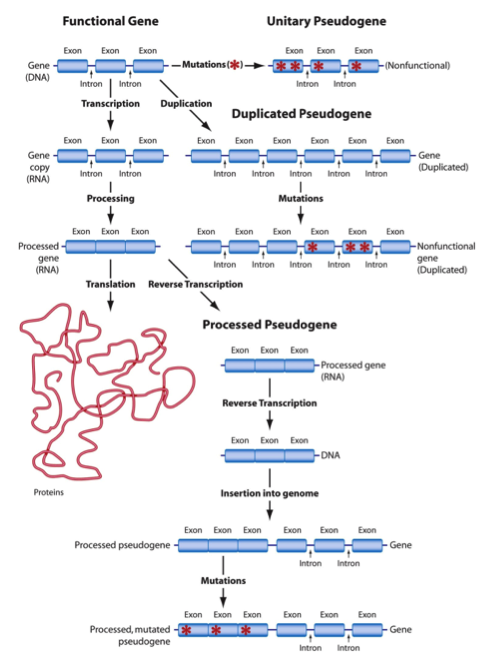 Evolutionary biologists have discovered several identical unitary pseudogenes shared among humans and other primates. The classic example is the one that supposedly encoded the enzyme L-gulono-γ-lactone oxidase (GLO) in primates. In other mammals (except guinea pigs) GLO plays a role in ascorbic acid (vitamin C) biosynthesis. However, primates do not have a functional GLO enzyme—rather they possess a GLO pseudogene. According to the evolutionary paradigm, mutations corrupted this gene, rendering vitamin C biosynthesis impossible for primates. The inability to produce vitamin C does not hamper their fitness, however, because they receive the vitamin through dietary sources.

The primate GLO pseudogenes possess many of the same mutations that occur in the human GLO pseudogene. Thus, the evolutionary model maintains that these “mutations” occurred in the ancestral species shared by all primates. The alterations were then propagated as different primate species diverged.

Molecular biologists suggest that duplicated pseudogenes (the largest pseudogene class) arose when genes underwent duplication in the genome. Afterwards, the copies experienced severe mutations that rendered them unrecognizable as a functional gene by the cell’s machinery. Loss of the duplicated gene’s function has little, if any, effect on an organism’s fitness since an intact functional copy still exists.

Producing processed pseudogenes (as conceived by molecular biologists) is a complex procedure. The mechanism that generates these pseudogenes overlaps with the one used by the cell’s machinery to synthesize proteins.

The mere presence of unitary, duplicated, and processed pseudogenes in the human genome does not necessarily challenge a creation model. Mutations and errant biochemical processes could have generated these noncoding forms of DNA after humans were created. What evolutionary biologists find so compelling for their view is the fact that identical pseudogenes with many of the same mutations occur in humans, chimpanzees, and other primates in the corresponding locations within their genomes.

The Functional Importance of Duplicated and Processed Pseudogenes

Recent discoveries, on the other hand, undermine what appears to be an open-and-shut case for biological evolution. As noted in my books Who Was Adam? and The Cell’s Design, scientists have determined that a number of processed pseudogenes generate mRNA transcripts that are translated into functional proteins. In other words, it is incorrect to claim that processed pseudogenes are nonfunctional. From a design/creation standpoint one could argue that the shared processed pseudogenes among humans and the great apes reflect common design, not shared ancestry.

Again, from a design/creation view one could maintain that shared duplicated pseudogenes result from common design.

What about Shared Unitary Pseudogenes?

Discoveries of function for processed and duplicated pseudogenes are important for a design/creation model. However, it has been troubling to consider that no function could be ascribed legitimately to unitary pseudogenes. In the absence of any clearly defined function, the only reasonable way to interpret the presence of the identical (or nearly identical) unitary pseudogenes in corresponding locations in human and great apes genomes is as evidence for common ancestry. I acknowledge this problem in Who Was Adam?3

What about the genetic material without known function (like the GLO unitary pseudogenes that humans and chimpanzees share)? Currently the RTB model offers no clear explanation for these features. The model does predict, however, that as with other classes of noncoding DNA, function will one day be discovered for unitary pseudogenes.

Now it turns out that my prediction has been satisfied. In the next installment of this series I will discuss the work of researchers from Oxford University that shows unitary pseudogenes possess function.

Earth experienced many events that brought it to the brink of becoming a barren wasteland.
Design

Although Scripture’s primary purpose goes far beyond describing the physical details of creation, what it does say about the natural world should match observable...
Design

There is no end to a mother’s love. Most willingly sacrifice and even suffer for their children’s sake. And for many women, this suffering...
Biology