When Kathy and I were expecting our first child, our obstetrician sized up our small frames and confidently predicted that our baby would be no more than 7 pounds and no longer than 20 inches. On that basis we purchased standard, newborn-size baby clothes.

The day Joel was born I witnessed the shocked look on our obstetrician’s face, which revealed his prediction was wrong. Joel weighed in at 9 pounds 2 ounces. The obstetrician declared that Joel was the thinnest 9+ pound baby he had ever delivered. Not fully stretched out, Joel still measured 23.5 inches long. Needless to say, we had to give away the newborn-size clothes and jump straight to the 9–12 months onesies.

Joel’s birth was extraordinary, but not impossible. In hindsight, I should have told the obstetrician that I have both a nephew and an uncle who are taller than 6 feet 7 inches. Thanks to recently published research in the Astrophysical Journal, astronomers now recognize that the Sun’s birth was also more exceptional (but not as impossible) than they once thought.

For the last two decades astronomers have been struck by an apparent contradiction in the Sun’s birth. The abundance of heavy elements and certain radiometric isotopes in Earth’s crust, Earth’s interior, and primitive meteorites is so high as to imply that the Sun must have been born in a star cluster (see figure below) with at least 10,000 member stars. Only in such a cluster would the emerging solar nebula and its budding planets be exposed to the requisite number and kind of nearby supernova eruptions (the only possible sources of the heavy elements and suite of radiometric isotopes in Earth’s crust). However, dynamical studies demonstrate that in such a cluster, close stellar encounters would gravitationally perturb the solar nebula. These perturbations would not necessarily prevent the formation of the Sun’s eight planets, but they would rule out the possibility of the Sun’s seven largest planets all lying close to the same plane (inclination angles less than 3.4°) and all manifesting small eccentricities (less than 0.09). Eccentricity refers to the amount an object’s orbit around another body deviates from a circle. Mercury’s eccentricity (0.21) is pumped up by perturbations from the other planets but has so little mass and is so close to the Sun that its gravitational impact on Earth is negligible 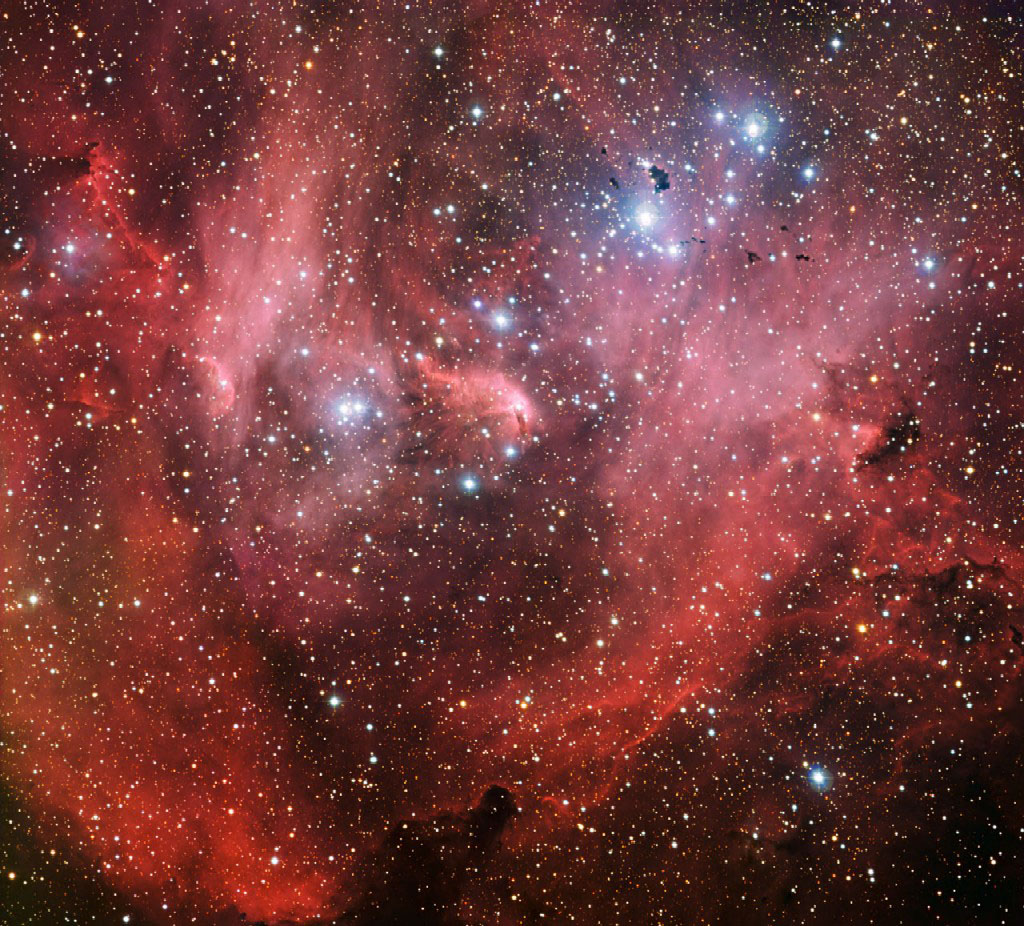 The Young Open Star Cluster IC 2944
Research demonstrates that the solar system originated in a star cluster like the one above containing many thousands of stars.

Herein lies the apparent contradiction: For humans to exist on Earth, its crust must possess a wide diversity and large abundance of heavy elements. These heavy elements require that the solar nebula be birthed in a star cluster containing a minimumof about 10,000 stars.1 The possibility of advanced life on Earth also requires that Earth have partner planets, some of which are gas giants and some of which are terrestrial planets, but all of which possess low inclination angles and low eccentricities. The low orbital inclination and eccentricity requirement for the Sun’s planets imply that the Sun cannot have been born in a star cluster with any more than about 3,000 member stars.2

Last year (May 30–July 3, 2011), I wrote a six-part series for Today’s New Reason to Believe” titled “The Remarkable Design of the Solar System’s Turbulent Youth.” In this series I explained why the Sun had to be born in a very large star cluster and why, because of dynamical considerations, the Sun could not remain in such a cluster for very long. I also described how the solar system’s turbulent youth had presented astronomers with a number of dynamical anomalies (apparent contradictions), how recent and much more sophisticated dynamical analysis of solar system history had resolved these anomalies, and how the resolution of these anomalies yielded a far more powerful argument for the supernatural, super-intelligent design of the solar system for the specific benefit of human beings and human civilization.

As with any successful design model, the resolution of anomalies exposes other oddities that were not significant enough to be recognized until the larger anomalies were removed. Therefore, the proof of a design model’s validity (from a human perspective) lies not in the complete resolution and removal of all anomalies. Such a proof can be accomplished only by an omniscient Being. Evidence for a model’s success is determined by whether or not the anomalies are being progressively resolved as researchers learn more about the relevant disciplines. Success is also determined when the anomalies become progressively less significant as researchers continue to learn.

In the July 20 issue of the Astrophysical Journal two astronomers, Donald Dukes and Mark Krumholz, both at the University of California, Santa Cruz, presented a new dynamical analysis of the Sun’s probable birth cluster that resolves the apparent contradiction concerning the size of the Sun’s birth cluster.3 They first pointed out that the latest and best observations of young and very large star clusters establish that clusters break up and disperse typically in less than ten million years, rather than the 100 million years presumed in previous dynamical studies. The faster break-up time implies a much smaller probability that adjacent stars in the Sun’s birth cluster will dynamically excite the Sun’s nascent planets into high-eccentricity, high-inclination orbits.

Next, Dukes and Krumholz showed that the density of stars in a star cluster does not rise linearly with the number of stars in a cluster. In fact, they demonstrated that the number of close encounters the Sun would experience with other stars in its birth cluster is independent of the total mass of the cluster. Therefore, the Sun could be born in a star cluster big enough to experience the requisite number and kind of supernova eruptions to sufficiently enrich the solar nebula and, in particular, Earth with the heavy elements essential for advanced life without gravitationally exciting the Sun’s planets into such high-eccentricity, high-inclination orbits as to render advanced life on Earth impossible.

Dukes and Krumholz’s dynamical analysis shows that, while not probable, it is certainly plausible that a close encounter between the Sun and another star in its birth cluster could produce a Sedna-like object without stimulating the orbital eccentricities or inclinations of the Sun’s eight planets. However, they concluded “that it is highly unlikely that encounters in the birth cluster could be responsible for truncation of the Kuiper belt.”4

It seems that some other event or phenomenon later in solar system history must be responsible for the Kuiper belt truncation. As I communicated in part 5 of my series, “The Remarkable Design of the Solar System’s Turbulent Youth,” the “jumping Jupiter” event that occurred a few hundred million years after the solar system was ejected from its birth cluster, is the current leading candidate for explaining the truncation of the Kuiper Belt.

Thanks to the research work of Dukes and Krumholz, a major problem in scientists’ understanding of the early history of the solar nebula has been successfully resolved. By extension, Reasons to Believe’s biblical creation model, which incorporates the best solar system formation models, has passed yet another test in that once again ongoing scientific research has shown that remaining anomalies in our model are being progressively resolved and newly discovered anomalies proving less significant than previous ones.

That’s a rather intolerant statement, especially in light of how much broken marriages permeate our culture, even among those who attend church. However, while...
Philosophy & Ethics

Four years of seminary and one step from becoming a priest, Michael reveals he doesn’t believe in God. Before he can walk away, he’s...
Theology

The following individuals—respected authors, Bible scholars, scientists, pastors, linguists, and more—hold to a diversity of views on the timing of God’s creation. And yet...
Theology