Solar flares, if energetic enough, can spell bad news for advanced life. But ongoing research has revealed the unique stability of our own Sun, a quality that implies the solar system was designed for the benefit of advanced life and, in particular, humanity.

For me, every day is a good hair day because I don’t have much hair to worry about. Likewise, astronomers are discovering that because our Sun experiences so few really intense flares, virtually every day is a good “flare day.” But apparently the same cannot be said for many other solar-type stars.

All nuclear-burning stars exhibit flares (explosions on a stellar surface caused by the release of intense magnetic energy stored near starspots). Extremely energetic flares (known as superflares) are bad news for advanced life and especially advanced civilization. The biggest known solar flare took place in 1859. With a total energy release of about 1032 ergs it knocked out telegraph systems throughout the northern hemisphere.

Superflares are a hundred to a thousand times more powerful than the 1859 flare. If they were to occur on the Sun, they would do far more damage than just knocking out our electronic devices and electrical systems. Fortunately, the lack of any reports of such damage implies that no solar flares exceeding 1034 ergs have occurred during (at least) the last 2,000 years. Indeed, it’s probable such flares have not transpired at any time in recorded history.

In an effort to assess the risk of superflares, a team of astronomers from Japan set out to use the Kepler satellite to determine the properties and statistics of G-type dwarf stars, which belong to the same category as the Sun. The team observed 83,000 stars over a 120-day period. In 2012, they reported the detection of 365 flares with energies ranging from 1033 to 1036 ergs.1 For the 14,000 most Sun-like of the G-type dwarfs (those with a higher surface temperature and a slow rotation rate), the researchers detected 14 flares with energies exceeding 4 x 1034 ergs. However, they recognized that they lacked the data to draw definitive conclusions.

In November 2013, the astronomers reported the detection of 1,547 superflares on 279 G-type dwarfs over a 500-day observing period. This included 44 superflares on 19 of the 14,000 Sun-like stars,2 which averaged 2.3 x 10-3 superflares per year per star. This rate translates to a superflare occurring about every 440 years per Sun-like star.

The researchers also found that not all Sun-like stars are the same. Some manifested a superflare rate a thousand times greater than the average. They also noted that stars with a slower rotation rate experience a lower superflare rate. The Sun’s rotational period is 25 days and its surface temperature is 5,778 K (kelvin). In the team’s sample there were 5,000 stars with rotation rates greater than 25 days and surface temperatures within 200 K of the Sun’s. For these stars the researchers observed that superflares whose total energy exceeded 1034 ergs occur about once every 1,700 years per star.

Historical records suggest the Sun’s superflare rate may be even lower––a feature that might be explained by the Sun being exactly halfway through its nuclear burning stage or by its unique elemental composition, or both. The team is committed to finding out. And while we await their research results, already we know we orbit a remarkably stable Sun. That’s something to ponder and be thankful for each time we awake to a good flare day. 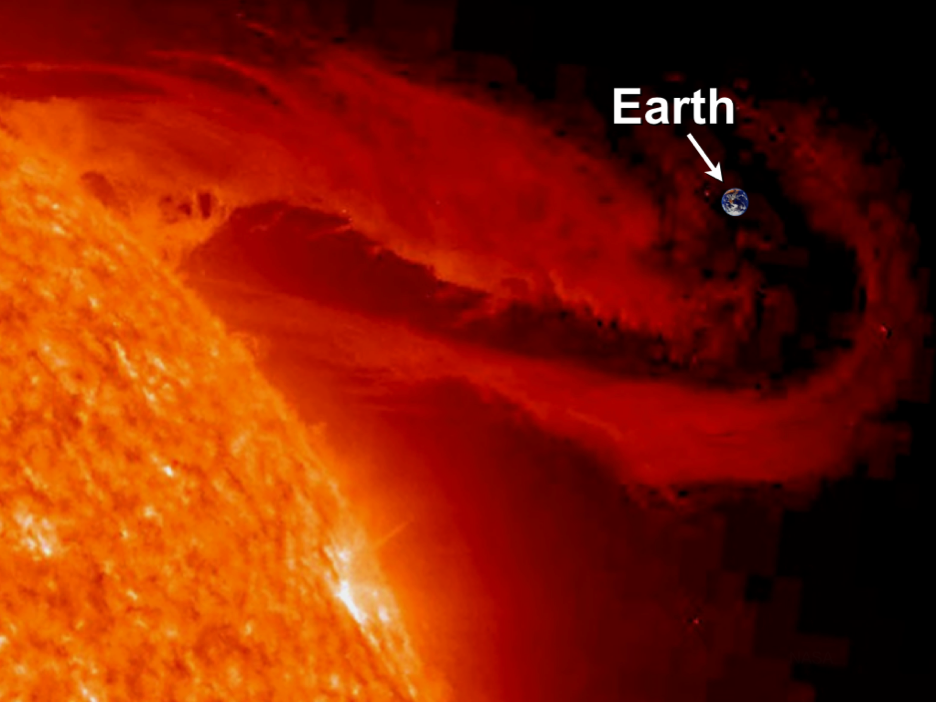 A Typical Giant Solar Flare
The size of the Sun and Earth are to scale. As large as this solar flare is, it is still far smaller than the one that occurred in 1859.

A team of American astronomers has found more evidence that points to the supernatural design of the late heavy bombardment (LHB) of Earth by...
Geology & Earth

How Earth Has Avoided an Iceball Catastrophe

We have ice now. Given the fact that the Sun was a lot dimmer in the past (see figure 2), we would expect Earth...
Geology & Earth

Geophysicists have known for years that the energy moving Earth’s crust pieces toward and away from one another (plate tectonics) comes from the flow...
Geology & Earth