“Missing Link Connects Dinosaurs, Birds,”1 trumpeted newspaper headlines around the world this summer. The excitement stirred by a June 23 press conference at the National Geographic Society in our nation’s capitol proved contagious. No wonder. The rhetoric was anything but objective and cautious as an international team of paleontologists announced the discovery of two fossilized specimens of feathered dinosaurs in China’s Liaoning province.2, 3 Philip Currie, curator of dinosaurs at the Royal Tyrrell Museum of Paleontology in Drumheller, Alberta, declared, “Dinosaurs did not become extinct. In fact, they are alive and well and represented by over 10,000 species of birds.”3 Mark Norell, from the American Museum of Natural History, expressed similar exuberance: “Evidence indicating that birds are derived from dinosaurs is absolutely overwhelming.”4 U. C. Berkeley paleontologist Kevin Padian said the discovery “should lay to rest any remaining doubts that birds evolved from small coelurosaurian dinosaurs.”5 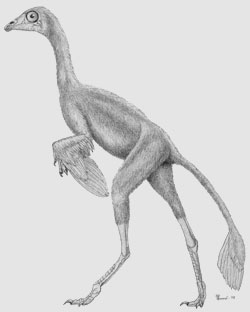 I do not dispute the claim that this discovery is important, spectacular even. However, the fossil finds are one thing, and the inferences drawn from them another. The first are data; the second, interpretation of the data. The tools of science must be used to test the reliability of the data. The rules of logic must be used to test the plausibility of the interpretation.

1. The feathers found on the two species, named Caudipteryx and Protoarchaeopteryx, are fully formed and fully functional. Both the body feathers and tail feathers discovered were identical to those found on flightless birds living today. A true “missing link” could be expected to reveal structures part way between scales and feathers.

Apparently, the paleontologists’ “missing link” interpretation arises from assumptions about the “weak” function of these dinosaurs’ feathers. Since skeletal evidence clearly shows that Caudipteryx and Protoarchaeopteryx were incapable of flight,6 researchers theorized that the feathers merely served as insulation or as a display to attract mates.7

I see a basis for theorizing a strong function for the feathers. The two species have been identified as turkey-sized, meat-eating theropods (though a few scholars still dispute their identification as dinosaurs7). Theropods survived by running down prey, and they ran on two legs. High-speed, two-legged running over rough terrain carries a high risk of injurious falls. Feathers, especially the barbed tail feathers found on Caudipteryx and Protoarchaeopteryx, would be ideal for stabilizing high speed running. Modern examples of such stabilization may be seen in the roadrunner and ostrich.

2. Caudipteryx and Protoarchaeopteryx are reportedly 120-145 million years old.8-9 The oldest known bird is the 150-million-year-old Archaeopteryx.8-9 This timing puts the Darwinian cart before the horse. An abstract of the first published article indicates that the proto in Protoarcheopteryx may be a mistake:

Phylogenetic analysis indicates that they [Caudipteryx and Protoarchaeopteryx] are both more primitive than the earliest known avian (bird), Archaeopteryx. These new fossils represent stages in the evolution of birds from feathered, ground living, bipedal dinosaurs.10

The actual fossil sequence contradicts their conclusion. The so-called progenitor, the “more primitive” creature, dates after the presumed descendent.

3. To say “dinosaurs did not become extinct” is to contradict an enormous body of well-established evidence. New evidence suggests that dinosaurs were wiped out more than once. Thanks to dinosaur mania, nearly every school-aged child today knows that the final dinosaur era, the Cretaceous era, was terminated some 65 million years ago when an asteroid collided with Earth.11-12

Recent discoveries show that similar extraterrestrial catastrophes marked both the Triassic-Jurassic and Jurassic-Cretaceous boundaries. In March of this year, geologists from Britain, Canada, and the U. S. published their discovery of a crater chain caused by the impact of a fragmented comet or asteroid. The collision date, roughly 214 million years ago, coincides with the close of the Triassic period. The diameters of the five impact craters, 100, 40, 25, 15, and 9 kilometers respectively, (not to mention possible ocean impacts) indicate that altogether they could account for the extinction of most, if not all, Triassic dinosaurs.13

Two teams of geophysicists from Austria, Australia, and South Africa announced a similar discovery, an ancient crater, anywhere from 120 and 340 kilometers in diameter, in the Kalahari desert that dates back 145±2 million years.14 This date coincides with our best estimate for the boundary between the Jurassic and Cretaceous periods. Even at the lower limit on the crater’s diameter, the impact that caused it was sufficiently destructive to explain the extinction of Jurassic dinosaurs.

These dramatic catastrophes imply that the so-called “ancestors” of modern birds are not. They could not have survived the devastation. Each of the comet or asteroid collisions that closed off the Triassic, Jurassic, and Cretaceous periods were of such magnitude that no land animal larger than a rodent would have survived. The geological and geophysical data rule out Archaeopteryx or other Jurassic era dinosaurs as ancestors of Protoarchaeopteryx or Caudipteryx, nor could Protoarchaeopteryx and Caudipteryx be the ancestors of Tertiary-era birds.

Corroborative evidence comes from experimental research published in April and July. This research closes a mass-extinction loophole popularized by Harvard professor Stephen J. Gould: punctuated equilibria. According to this theory, fossils disappear from the record, though the species do not entirely disappear from Earth, when environmental disasters strike and greatly reduce populations. When populations reach their lowest levels and habitats are most severely ravaged, natural processes work most efficiently to alter species, enabling them to survive and rebuild.

The latest research confirms, however, that the smaller the population and habitat, the greater the likelihood of extinction.15-16 Additional field studies provide the first direct proof that inbreeding brought about by habitat and population reduction is the “kiss of death.”17-19 The results were the same for both small animals (insects and rodents) and large.

4. My final point is that animals as large as theropods and birds are poor candidates for naturalistic change. Many factors severely limit their survivability and greatly enhance the probability of extinction. The six most significant are these:

In creatures such as birds and theropods, even small environmental changes can be catastrophic. We can document that the number of bird species has been cut in half, dropping from about 20,000 to just 10,000, over the last 30,000 to 40,000 years.20

While evolutionary principles fail to explain feathered dinosaurs, Genesis succeeds. God introduced large air-breathing animals on the fifth creation day. Though dinosaurs are not explicitly mentioned, they would of course fall into this category. The multiple extinctions of dinosaurs implies that God replaced extinct dinosaur species with new ones. In most cases the new species were different from previous ones. God was apparently changing Earth’s geology, bio-deposits, flora and fauna, step by step, in preparation for His final creation on Earth—the human race.

The so-called “transitional” forms of dinosaurs and birds suggest that God performed more than just a few creative acts here and there, letting natural evolution fill in the rest. Rather, God was involved and active in creating all kinds and stages of dinosaur and bird life, not to mention all other life—the first, the last, and all the forms along the way to the advent of modern humans.21

Note: Much more on the accordance of the fossil record with Genesis will appear in my next book, The Genesis Question, scheduled for release October 5.

What’s Hiding on the Moon?

Sometimes the things we search for turn up in the most unlikely places. Such may be the case in gaining information about the origin...
Origin of Life & Astrobiology

Imagine yourself in a courtroom with RTB astrophysicist Jeff Zweerink playing the role of attorney.
Astronomy

A TNRTB Best Of: Majestic Mountains

Summertime is just around the corner and with it, vacations to exotic destinations. Majestic mountains like the Rockies, Sierras, Alps, Andes, and Himalayas all...
Geology & Earth