A team of geologists and geophysicists at Colorado State University recently discovered that beavers gave humanity more than warm coats and hats.

One wonderful feature of the higher animals God created is that each one seems to benefit humanity in multiple remarkable ways. As research advances, more of these ways come into view. A team of geologists and geophysicists at Colorado State University recently discovered that beavers gave humanity more than warm coats and hats. They’ve shaped our land and impacted our life in ways we never realized.

In the January 2012 issue of Geology, researchers Kramer, Wohl, and Harry present results from their ground-penetrating radar and near-surface seismic refraction mapping of a region in Rocky Mountain National Park.1 This mapping revealed how much beavers contributed to sedimentation during the Holocene era (the past 11,700 years—since the end of the last major glacial epoch or ice age), and the magnitude is stunning.* 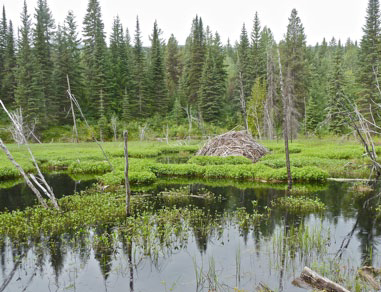 Wetlands formed by beaver dams cover several dozen acres near Golden, British Columbia.
The beaver lodge in the middle of this image stands ten feet above the water’s surface. In addition
to building dams and lodges, beavers also construct canals to float building materials that
would be difficult to haul over land.
credit: Hugh Ross

As much as 30 to 50 percent of all post-glacial sedimentation (above bedrock) formed from beavers’ labor, specifically from their construction of dams across waterways. Beavers are, in fact, among the main producers of our highly prized valley sedimentation.

The amount of beaver-induced sediment has gone virtually unnoticed until now because (1) human predation nearly drove beavers to extinction; and (2) civilization has aggressively limited both the size and permanence of beaver dams, two trends that need reversal.

Another obvious benefit of beaver dams is that they create wet meadows and wetlands (see figure). These wetlands support high species diversity and population levels for plants, insects, invertebrates, fish, amphibians, reptiles, birds, and mammals—all of which the world needs both for food and for protection from ecological catastrophes.

One less obvious benefit of beavers’ labor is that it helps purify our lakes, rivers, and waterways. The ponds that build up behind these dams create environments for processing nitrogen and storing carbon, removing much of both from the water.

Reactive nitrogen compounds flowing down rivers cause eutrophication, the blooming of cyanobacteria, which leads to hypoxia (oxygen depletion) and the generation of dead zones for fish and other animal populations. The eutrophication that currently plagues the Potomac River and much of Chesapeake Bay, for example, could be reversed, at least in part, by reintroducing beavers into the area.

Allowing beavers’ construction to remove carbon from our fresh water resources may prove even more crucial. As water flows downstream it becomes progressively more chlorinated (due to water treatment for urban use). When chlorine combines with carbon it produces a variety of cancer-causing chemicals. As beaver dams and canals remove carbon, they reduce the accumulation of these carcinogens in our drinking water supplies.

Clearly, we owe thanks to beavers and their Creator. They can “teach us,” as the book of Job says, about God’s care for us. As animal research continues, we’re sure to learn more.

Please note the following corrections, per the main author of the study cited in this post (April 23, 2012; see https://tnrtb.wordpress.com/2012/02/06/thank-god-for-beaver-dams/ for author’s full comment):

Thoughts on Is Genesis History?

A lot of people have inquired about RTB’s response to the documentary Is Genesis History? We have purposely not posted anything about the documentary...
Design

Humanity’s obesity epidemic threatens to become a pandemic. The crisis has caught the attention of the science research community and has led to amazing...
Design