Recently, two separate research teams discovered Tersicoccus phoenicis in NASA and ESA clean rooms, where engineers assemble spacecraft. This microbe’s ability to survive in the harsh clean room environments, with virtually no access to nutrients, raises the possibility that these microbes traveled with the Phoenix Mars lander and potentially contaminated the planet with Earth life. Of course, this surprising discovery confounds the search to discover life on the Red Planet. Many people believe if life is discovered on Mars, then the evolutionary explanation for life’s origin gains validation. This latest work suggests otherwise.

Playing football is not without risks. On-the-field injuries are not the only concern anymore. In recent years, a number of NFL teams have become troubled by an invisible opponent in the locker room: MRSA (methicillin-resistant Staphylococcus aureus). Tiny cuts and scraps can jeopardize a player’s career, if they get infected with this nasty microbe.

It isn’t surprising that an NFL locker room would harbor a menagerie of microbes—but no one would ever suspect microbial contamination of a NASA clean room. 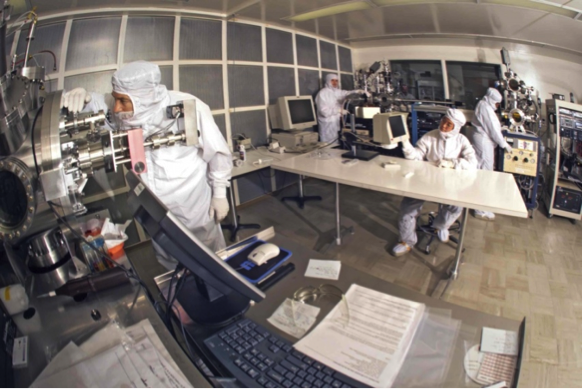 In these clean rooms, where spacecraft are assembled, the air is stringently filtered, the floors are cleaned with certified cleaning materials, and all surfaces are wiped with alcohol and hydrogen peroxide and heated at high temperatures. Anyone who enters the clean room is fully garbed in a special suit, with gloves, booties, hat, and mask. Other precautions include passing through an air shower, to blow away dust and walking over a sticky surface to remove material on the bottom of the foot covers.

NASA and other space agencies go through these contortions to ensure that when spacecraft leave Earth, they are not carrying microbes that could contaminate other bodies in our solar system. So, it was a shock to everyone involved when this system of purification failed.

Researchers recently isolated a previously unknown microbe from spacecraft assembly clean rooms at the Kennedy Space Center in Florida and the Centre Spatial Guyanais in Kourou (French Guiana).1 They dubbed the microbe Tersicoccus phoenicis (after the Phoenix lander) and determined that it is different enough from all known bacteria to constitute a novel genus.

T. phoenicis’ remarkable ability to survive in the clean room environment complicates the search for extraterrestrial life on Mars and elsewhere in our solar system. When Phoenix travelled to Mars, it very well may have taken microbes from Earth along for the ride. Because T. phoenicis can survive in a hostile clean room environment with virtually no available nutrients, makes the likelihood of bacterial cells travelling to the Red Planet and surviving after their arrival a real possibility. This latest study is not the first occasion for astrobiologists to raise concerns about the Phoenix mission contaminating the Red Planet. (Go here to read an article by JPL physicist Dave Rogstad on other sources of microbial contamination associated with clean rooms.)

Planetary protection is critical if NASA and other space agencies hope to detect endogenous life on Mars and other locales in our solar system. Yet, it looks as if microbes’ ability to survive in extreme conditions may thwart the quest to discover Martian life, and along with it the opportunity to affirm abiogenesis.

The most sensitive optical picture ever taken of the universe strengthens the idea that the universe indeed had a beginning (and thus a Beginner)....
Creation Model

On June 5–6, 2012, a rare solar system event will occur. Venus will transit across the face of the Sun. Such a transit occurs...
Creation Views

A mechanism may provide important insights into the dark energy pervading the universe and its fine-tuning to support life.
Astronomy