If there’s one issue that really divides old-earth and young-earth creationism, it’s animal death before the Fall. For many, the idea of an ancient Earth is unacceptable because such a time frame would necessitate animal death prior to Adam and Eve’s sin—a scenario often viewed as incompatible with the loving and benevolent God of the Bible. 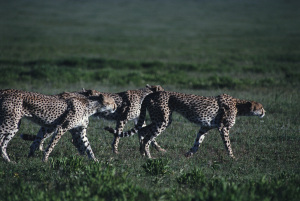 RTB disagrees. We view animal death as a natural and in some ways, even “very good” part of God’s creation, both pre-Fall and post. Scholars Hugh Ross, Fuz Rana, and Kenneth Samples address the biblical and scientific evidence for pre-Fall animal death on RTB’s three-hour audio recording Life and Death in Eden.

Recently re-released as a downloadable MP3 file and as an MP3 audio CD, Life and Death in Eden is one of my personal favorites among our resources. Joining Hugh, Fuz, and Ken for this discussion are RTB staffers and apologists Krista Bontrager (as moderator) and Marj Harman (representing opposing viewpoints).

The talk is thoughtful and thorough, covering such topics as:

Life and Death in Eden also addresses the supposed incompatibility of pre-Fall animal death with God’s perfect character. Some believers even go so far as to declare that they would not be able to have faith in a God who intentionally incorporated animal death into His creation.

During the recorded discussion, Marj points to the example of Charles Templeton, a former evangelist who eventually rejected the Christian faith partly because of the violence and pain he observed in nature. Marj reads from Templeton’s work, “Nature is, in Tennyson’s vivid phrase, ‘red in tooth and claw,’ and life is a carnival of blood….How could a loving and omnipotent God create such horrors as we have been contemplating?”

The scholars point out that this perspective displays excessive sentimentality toward animals, as may be common among urbanites and younger generations unused to dealing with animals in a rural setting. Ken suggests, respectfully, that this view may also be influenced by a sentimental view of God. He says, “I think we have to be cautious when we decide to reason based upon what is consistent with the character of God.”

I asked Ken to elaborate on this thought. He pointed out that, while we shouldn’t dismiss the idea that people can infer some things about God’s character, “We really have to rely on what has been revealed by God explicitly and formally. Psalm 104 conveys the idea that carnivores received their prey from God….He’s not to be trifled with.”

Animal death before the Fall may not be neat and tidy—but that doesn’t mean it reflects poorly on God’s character. Personally, I think we need to find a balance between the fire-and-brimstone and the sanitized-Sunday-school views of God. Swinging one way or the other makes Him seem one-dimensional. The Bible, in both Old and New Testaments, reveals a God so multifaceted that no human can ever fully comprehend Him. Scripture shows both God’s long-suffering love and His frightening wrath.

We may not like the fact that God can be fierce or mysterious or have a good reason for pre-Fall animal death—but our dislike doesn’t change the truth. We know that we can trust in His perfect goodness even though, in our limited human minds, we cannot fully understand His thoughts, plans, and purposes.

If the idea of animal death before the Fall bothers you, I’d highly recommend listening to Life and Death in Eden. Even if doesn’t change your mind, it can at least help you understand this point-of-view on creation—and perhaps make it less alarming.

Resources: In addition to Life and Death in Eden, RTB offers several web articles dedicated to the debate over animal death before the Fall.

Is There Scientific Evidence for Extra Dimensions?

Question of the week: Do we have any scientific evidence for the existence of dimensions beyond length, width, height, and time?
Origin of Life & Astrobiology

Coined in the nineteenth century, the phrase “silent majority” referred to the dead and the fact that the number of people who have died...
Creation Views

Opponents of big bang cosmology, both atheists and young-earth creationists, frequently attempt to push aside very compelling and overwhelming physical evidence for this biblically...
Creation Views