Graduation, marriage, the birth of a child: these are all climactic events in a person’s life. Likewise, there have been a number of highlights in the history of life on Earth. One is the birth of complex or eukaryotic cells. Though often explained in evolutionary terms, a recent article published in the scientific literature raises questions as to whether an evolutionary perspective can adequately account for this milestone in life’s history.1

According to the geochemical and fossil records, life first appeared on Earth around 3.8 billion years ago.2 These first life-forms were simple, single-celled microbes referred to as prokaryotes. Prokaryotic cells consist of a cell wall and are usually around 1 to 2 microns in size. Typically, no other internal features are visible with a microscope.3 Two of life’s three domains, Bacteria and Archaea, consist of prokaryotic microbes.

The third domain of life, Eukarya, is made up of complex cells and doesn’t appear in the fossil record until around 2 billion years ago. Eukarya is comprised of both single-celled microbes and advanced, multicellular organisms like plants, fungi, and animals. Eukaryotic cells are much larger than prokaryotic cells, possessing complex internal structures such as a nucleus, membrane-bound organelles, (mitochondria, lysosomes, peroxisomes, etc), membrane networks (endoplasmic reticulum the Golgi apparatus), and a cytoskeleton. 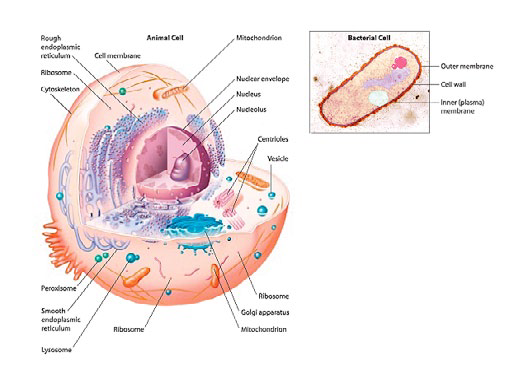 Traditionally, evolutionary biologists have argued that the first eukaryotic cell originated as a consequence of the fusion of bacterial and archaeal cells. If this is the case then there are two fundamental domains of life, with Eukarya representing a derived domain. More recently, some evolutionary biologists have posited a three-domain model in which they maintain that Eukarya is a distinct lineage independent of Bacteria and Archaea.

Currently, the origin of eukaryotes remains controversial––with a variety of arguments made in favor of both the two-domain and three-domain models. Evolutionary biologists have hoped to resolve this controversy with the use of DNA sequence data. By comparing similarities and differences in DNA sequences, biologists can construct evolutionary trees. And, because of the increasing availability of vast amounts of DNA sequence data as researchers sequence more and more genomes of bacteria, archaea, and eukaryotic organisms, scientists have become even more hopeful about the potential for this approach to solve the problem of eukaryotic origins.

In October 2010, a team of evolutionary biologists from France and New Zealand wrote a review article summarizing the results of large-scale studies employing this DNA sequence data to address the origin of eukaryotes. At the time of publication, seven such studies had been conducted, using, for the most part, the same data sets.

Yet, instead of resolving the question (of the origin of eukaryotes), this work seems to have added more questions. According to the authors of the review paper, “the deluge of genomic data has not yet yielded a resolution to this debate and has, if anything, intensified it.”4

Another possibility is that an evolutionary explanation for the origin of eukaryotes is incorrect. In science, contradictory results are a tell-tale indicator that something is fundamentally wrong—with the data, the methodologies, or the theory.

When (most) scientists attempt to explain events in life’s history, like the origin of eukaryotes, they start with the belief that evolution is a fact and then interpret the data from an evolutionary framework. Often times this approach yields disparate evolutionary trees and accompanying controversy. In these situations, evolutionary biologists look to the future with the hope that access to a database of whole genome sequences will bring clarity to the evolutionary relationships. But as this latest research highlights, this isn’t the case. It looks like evolutionary biologists have reached the end of the road in their quest to explain the origin of eukaryotes. As the authors point out, “Despite the very large number of complex genomes used and the various means of data collection, the number of markers that can be used to investigate the relationship between the Archaea and the Eukarya is very small and seems to have reached its limit.”5

A key idea of the evolutionary paradigm, namely that evolutionary trees built from separate DNA sequence molecules should agree and should also agree with those constructed from morphology, is not supported by the evidence. This disagreement is more profound than it seems on the surface. It can be taken as evidence for the creation paradigm. According to the late evolutionary biologist Morris Goodman, in an article he wrote for The Cambridge Encyclopedia of Human Evolution:

“If the biblical account of creation were true, then independent features of morphology, proteins, and DNA sequences would not be expected to be congruent with each other. Chaotic patterns, with different proteins and different DNA sequences failing to indicate any consistent set of species relationships, would contradict the theory of evolution.” 6

If evolutionary theory is true, scientists should not expect to see biological systems and features “repeated” in supposedly unrelated organisms—yet nature is replete with...
Biochemistry

Does Information Come from a Mind?

Imagine you’re flying over the desert, and you notice a pile of rocks down below. Most likely, you would think little of it. But...
Biochemistry

ATP Synthase Ratchets Up the Case for Intelligent Design

I love reading Shakespeare’s plays and seeing them performed. One of the things that fascinates me about the Bard’s work is his use of...
Biochemistry