On October 16, the physicists and astronomers who comprise the Laser Interferometer Gravitational-Wave Observatory (LIGO) and the Virgo gravitational wave telescope research teams announced the detection of a fifth gravity wave event. Radio astronomer Alessandra Corsi at Texas Tech University called this detection “a big gift that nature has given us” and “a life-changing event.”1

This “life-changing event” ranked as the largest research collaboration in the history of mankind. Scientists at 952 different research institutions participated in the discovery. More than 4,600 astronomers (about a third of the world’s total population of research astronomers) at 70 different observatories contributed to the research findings.

The “big gift” was that this detection was the first-ever observation of gravity waves from the merger of two neutron stars. The previous four gravity wave detections were all the result of the merging of two black holes. What made this gift especially big was that the gravity waves from the merging of two neutron stars were observed by both the LIGO and Virgo gravity wave telescopes. The three locations of the gravity wave detectors (Hanford, Washington; Livingston, Lousiana; and Pisa, Italy) allowed the researchers to roughly locate the gravity wave event to within 60 square degrees in the sky. The LIGO and Virgo scientists promptly alerted astronomers around the world to perform follow-up observations at multiple wavelengths. These observations led to pinpointing the exact location of the neutron star merging event.

The event occurred on August 17 at 12:41 universal time 6,200 light-years from the nucleus of the large elliptical galaxy NGC 4993 (see figure below).2 NGC 4993 is 130 million light-years from Earth in the Hydra constellation.3 It is a little closer to us than the center of the Virgo cluster of galaxies. 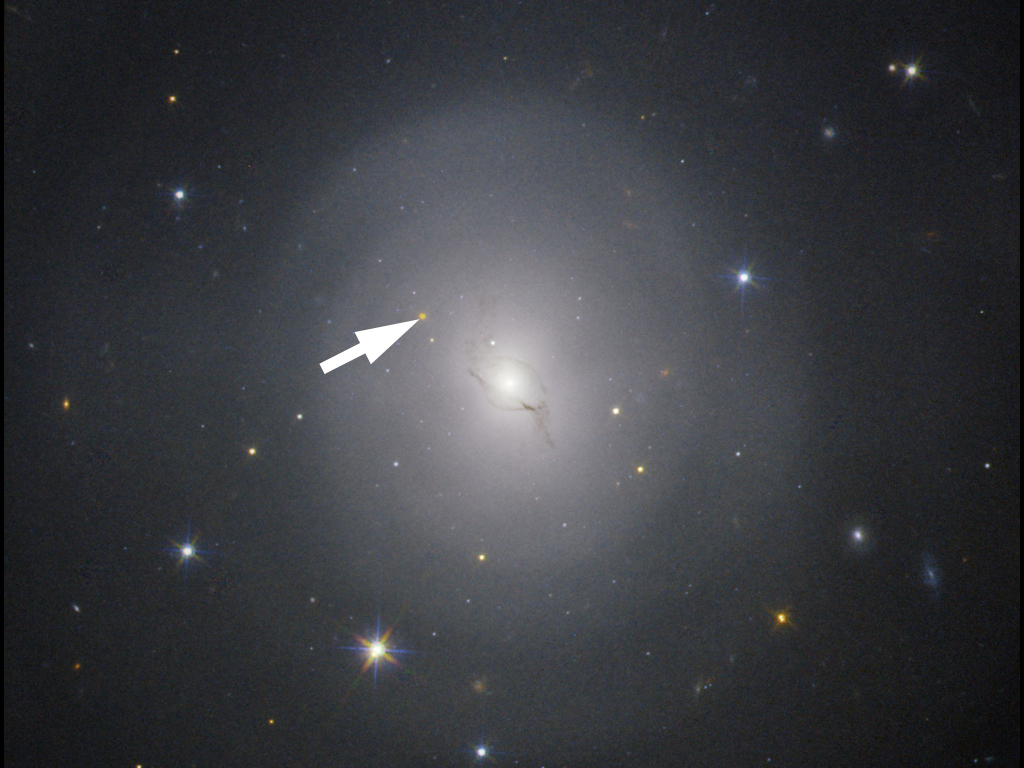 NGC 4993, a Large Elliptical Galaxy
The neutron star merging event occurred very near the bright dot identified by the arrow to the left and above the nucleus of NGC 4993. Image credit: NASA/ESA

Two seconds after the detection of the gravity wave signal, the Fermi Gamma-ray Space Telescope detected a brief gamma-ray burst from the event.4 A few hours later, astronomers at five observatories identified the light source of the event. Over the course of several days, they observed the neutron star merging event fade from a bright blue color to a dim red color. About two weeks later, the merging event began to emit both x-ray and radio waves.

The volume of accumulated data from the 4,600+ astronomers at 70 observatories and 952 research institutions5 led to several outstanding discoveries.

Origin of Short Gamma-Ray Bursts
First, the wealth of data on the neutron star merging event solved the mystery of the origin of short gamma-ray burst events. Gamma-ray bursts range from 10 milliseconds to a few hours in duration. Several hundred have been observed. Orbiting satellites currently detect an average of one gamma-ray burst per day. None have been detected any closer than 130 million light-years away.

This lack of nearby gamma-ray bursts is good since they are deadly for life. In fact, the frequency of gamma-ray bursts, by itself, rules out 90 percent of all galaxies as candidates for harboring enduring life.

Theoretical physicists had determined that the only conceivable source of gamma-ray bursts shorter than two seconds in duration was the merging of two neutron stars to form a black hole. The multi-wavelength observations of the August 17 gravity wave detection clinched this conclusion. From now on, astronomers can be confident that whenever a short gamma-ray burst accompanies a gravity wave detection, they are looking at the merger of two neutron stars.

Reality of Kilonovae
For decades, astronomers have hypothesized the existence of kilonovae or macronovae. These events are thought to briefly outshine ordinary novae by about a thousand times. For comparison, a supernova is about 40–50,000 times brighter than the brightest novae. Theoreticians had calculated that the merging of two neutron stars should result in such furious radioactive decay of heavy radioisotopes as to produce an emission of light at least a thousand times brighter than an ordinary nova.

Furthermore, theoreticians had determined that such radioactive decay should produce the emission of bright blue light that, over a few days, transitions to dimmer red light as the daughter products of the radioactive decay absorb the blue wavelengths of the initial light emission. Multi-wavelength observations of the August 17 gravity wave event confirmed all the theoreticians’ deductions.6

Source of r-Process Elements
The periodic table contains 94 naturally occurring elements. (Plutonium and neptunium, though present on the early earth, have long since decayed away, leaving 92 today in Earth’s crust.) Several decades ago, astronomers and physicists established with high accuracy how stars and supernovae manufacture the elements lighter than iron and half the elements that are heavier than iron—the s-process elements. They also successfully determined the means by which the other half of the elements heavier than iron—the r-process elements—are formed. However, they were stymied in their attempts to explain the source of the r-process elements.

The r-process is shorthand for rapid neutron capture process. The process entails a succession of rapid neutron captures that results in lighter elements being transformed into heavier elements. The process is viable only where there is an extremely high flux of free neutrons. The neutron-rich debris thrown off from the merging of two neutron stars provides such a high flux of free neutrons.

The multi-wavelength observations of the August 17 gravity wave event affirmed that the merger of the two neutron stars indeed efficiently produced r-process elements.7 Moreover, the observations established that most, if not nearly all, the r-process elements that exist on Earth and elsewhere in the universe came from neutron star merging events.

Earth’s superabundance of thorium and uranium also explains its enduring plate tectonics, which transformed it from a water world into a planet with both permanent surface oceans and surface continents. Without this transformation, nutrients crucial for sustaining life would not be adequately recycled. Earth would quickly have become permanently sterilized.

If it were not for primordial Earth being strongly salted by r-process elements produced by neutron star merger events, any kind of advanced civilization would be impossible. It is even doubtful that humanity would have advanced past stone-age technology if not for corrosion-resistant gold and silver paving the way for metallurgy.

Without the benefit of silver, gold, platinum, palladium, and osmium produced by neutron star merger events, we would lack the catalysts and electronics components that our high-technology civilization demands. We would also lack chemotherapy drugs and many other chemical compounds that sustain our high standard of health.

Not just on Thanksgiving Day, but every day we should thank God for his bountiful providence. I encourage every reader to thank God for giving astronomers the capability of learning so much about neutron star merging events that uncover more of the glory of God in creation. I encourage all readers, too, to thank God for exposing primordial Earth to such a rich source of r-process elements from neutron star mergers and for protecting us now from any nearby mergers. The heavens indeed proclaim the glory and righteousness of God.

Have You Thanked God for Your Oxygen Today?

Probably nothing is taken more for granted than the air we breathe. At sea level our atmosphere has an air pressure of 15 pounds...
Biology

Birds fulfill a critical role in spreading the seeds of plants far from their initial locations. Thus, birds help promote the survival, health, and...
Geology & Earth