Your child lies on the couch acting unusually calm. You touch their forehead and it feels warm.

Gregg Davidson and Ken Wolgemuth, both Christian geologists, make a convincing argument that Earth is much older than 6,000 to 10,000 years old based on the corroboration of tree-ring, varve, and carbon-14 data. Below is an excerpt from an article originally posted on the BioLogos and Solid Rock Lectures websites (for direct links to the original articles click here).

I am interested to hear how anyone from a young-earth perspective responds to Davidson and Wolgemuth’s argument. Please send your comments to the address given after the excerpt.

Most people know what a tree ring is. Summer growth produces a wide lighter-colored ring, followed by a narrow, darker-colored ring in winter. The two rings together represent one year.

Varves are sediment layers formed in lakes in certain environments. In northern latitudes where lakes freeze over, fine-grained material will settle out in winter, followed by coarser-grained material in spring as ice thaws and increased stream flow carries larger particles into the lake. Each winter-spring cycle produces a fine-coarse couplet called a varve (Fig. 4). [Image credit:https://geology.tufts.edu/varves/default.asp.]

In other places, varves may form from diatom blooms. At all times of the year, fine particulate matter settles out to the bottom, but during the spring, single-celled organisms with a solid shell rapidly reproduce near the surface of the lake. As they die, the shells rain out onto the lake floor and form a light-colored coating. Each winter-spring cycle produces a dark-light colored sediment couplet, or varve. In both examples, each varve represents one year.

Varves form in many lakes around the world. In one lake in Japan, Lake Suigetsu, a sediment core was collected in 1991 nearly 250 feet in length.1 The core contained an uninterrupted sequence of varves, with a total count in excess of 100,000. To the researchers, it was logical to think that 100,000 varves likely represented 100,000 years, but perhaps they were making unwarranted assumptions. What if in the distant past, multiple varves were deposited per year. More specifically, what if a massive flood with thousands of surges back and forth across the land laid down thousands of varves in a single year? Fortunately, we do not have to depend on assumptions, but can actually make measurements to determine if this happened. To do so, we will revisit tree rings for a moment.

We will employ tree rings and carbon-14, but not in the way readers may be accustomed to seeing. We will not use carbon-14 to determine an age at all. We will simply measure how much carbon-14 is currently found in each tree ring. Carbon-14 decays with time, so if each tree ring represents one year of growth, we should see a steady decline in the carbon-14 content of each successive ring. Figure 5 shows tree-ring carbon-14 data from living trees extending back 4000 rings.2 The nearly straight line formed by the data means that it might be possible for a year here or there to have a missing or double ring, but overall, each ring represents one year at least back 4000 years. A straight line (as opposed to curving upward or downward) is also confirmation that radioactive decay rates have remained constant over this time period. 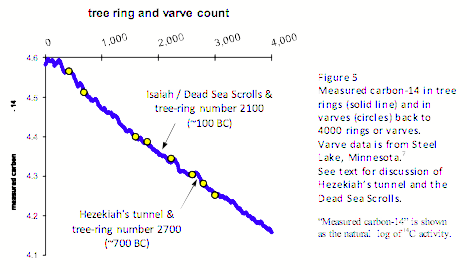 If additional confidence in this data is desired, it may be helpful to note that the amount of carbon-14 found in a timber from a tunnel in Jerusalem thought to have been built by Hezekiah is approximately the same as the amount found in tree ring number 2700, which places its ring-counting age where expected from Biblical records if each ring equals one year. Even better, consider the Dead Sea Scrolls—the book of Isaiah in particular. Isaiah 53 describes Christ in such detail that Bible critics have long argued that it must have been written after the time of Christ. The amount of carbon-14 in the Isaiah scrolls is equal to or less than the amount in tree ring number 2100, meaning carbon-14 confirms its before-Christ historicity.3

Carbon-14 has also been measured in varves. The carbon-14 record for varves in Steel Lake, Minnesota is shown as circles in Figure 5. Note that they fall on top of the tree ring data, which means 4000 varves, at least in this lake, must also equal 4000 years.

Now we are ready to consider that at some time prior to 4000 years ago, a giant flood resulted in myriad varves laid down in a single year.  There are a few possible results. The most logical would be that all these varves would have the same carbon-14 content because they were all laid down in the same year. This would yield the projected data shown in Figure 6a. 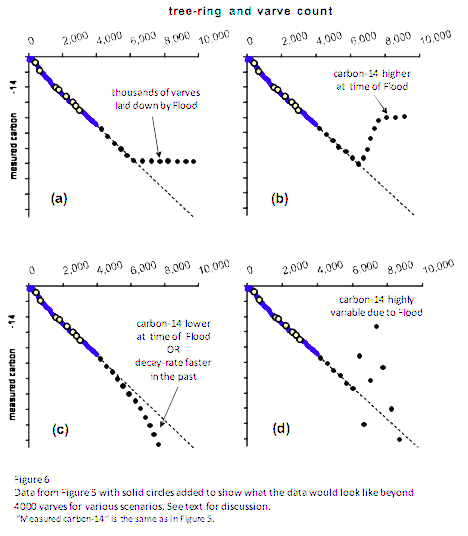 Alternately, perhaps the Flood caused the normal production of carbon-14 to be drastically altered. Figure 6 (b, c and d) show what the data would look like for different possible scenarios such as much higher than normal, lower than normal, or wildly fluctuating carbon-14 production at the time of the Flood, or an initially fast carbon-14 decay rate that slowed over time. 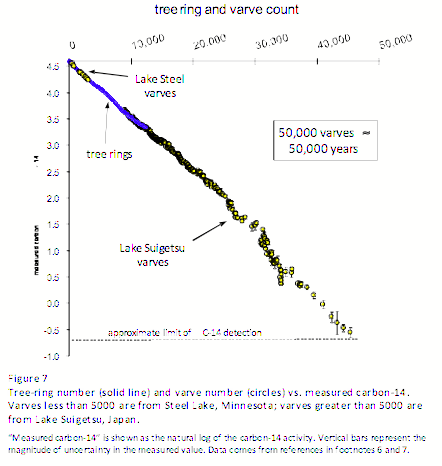 Figure 7 shows varve data from Steel Lake and Lake Suigetsu extended to the limit of carbon-14 detection. Serious consideration of this data should be sobering for the committed Young-Earther.

The high degree of linearity (straightness) of this data has two possible interpretations.

Option 2:  God started with a fast rate of carbon‑14 decay and dozens of diatom blooms and die-offs each year, but then intentionally and precisely slowed down each independent and unrelated process in such a way as to make it falsely look as if the data confirms the accuracy of carbon-14 and varve counting as legitimate methods of determining age.

Option 2 should be unacceptable to all Christians, for it means God manipulated his creation so that a study of it would convincingly tell a story that was not in fact true.

This excerpt makes a compelling claim that the tree-ring, varve, and carbon-14 data provide a continuous record of time for at least 20–30 thousand years. Additionally, that time record reconciles well with some biblical dates. If you can provide a young-earth model that explains why the tree-ring, varve, and carbon-14 data converge to provide good dates for biblical events but should not be trusted for dates beyond 4,000 years, please send your comments to respondtojeff@reasons.org.

Prior to joining Reasons to Believe in June of 1999, I spent seven years working in research and development for a Fortune 500 company....
Human Origins & Anthropology

Mosaic Eve: Mother of All (Part 1)

In a previous blog on Adam and Eve, I mentioned that the RTB model of human origins dated the range of an historical, sole...
Human Origins & Anthropology

Unearthing the Ancient Near East