We all experience mood variation, to one degree or another, and that makes life interesting. But for those who experience frequent, extreme mood cycles, daily life presents major challenges. In some cases, the cycles make holding a job or maintaining close relationships virtually impossible.

Planetary scientists are discovering that what’s true about humans in this respect may also be true for planets. Orbital and rotational cycles that are too frequent, too brief, and/or too large seriously limit or eliminate a planet’s potential for life support. Research on these cycles, called Milankovitch cycles, by British geophysicist Dave Waltham adds weight to the already potent evidence for the anthropic principle—the observation that the universe manifests exquisite fine-tuning at all levels for the benefit of human existence. Because this fine-tuning occurred before humanity’s appearance, it seems the universe was intended to provide a home for humans. Waltham’s research also affirms the “rare-Earth” doctrine, which says that while planets the size and mass of Earth may prove abundant in the universe, those with all the just-right characteristics to support advanced life will prove either extremely rare or utterly unique to our solar system.1

Figure 1: Orbital Eccentricity
No planet follows a perfectly circular orbit around its star. Elliptical orbits are the norm. The greater the difference between the semi-minor axis and the semi-major axis, the more “eccentric” is a planet’s orbit.

Figure 2: Precession of a Spinning Top
Torque created by the force of gravity applied at the center of gravity and the reactive force applied where the top touches a flat surface causes the rapidly spinning top’s rotation axis to slowly trace the circular path pictured above the top. 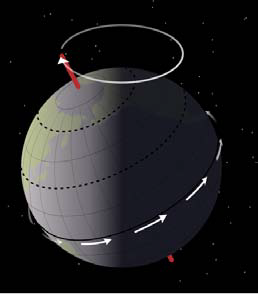 The inclination of Earth’s orbit goes through its cyclical variation in about 41,000 years. The current cycle for Earth’s eccentricity variation is completed in about 100,000 years. Variation in Earth’s axial tilt is also slow and gradual, but it appears more random than cyclical, like some moods.

Earth’s obliquity varies between 22.1 and 24.5 degrees over an oscillation cycle of 41,000 years. Its current obliquity equals 23.44 degrees. Over the past four billion years, Earth’s eccentricity has varied between 0.005 and 0.058, an unusually small number. However, over the past several million years its variation has been a barely perceptible, from 0.014 to 0.019.

Waltham’s goal was to compare Earth’s cyclical periods (tens of thousands of years) and degree of orbital and rotational variation (less than a few percent) with those of other Milky Way Galaxy planets. He achieved this goal by detailed computer modeling, comparing Earth’s orbital and rotational properties with those of synthetic populations of Earth-like planets. Waltham developed three different sets of models. In the first, he varied Earth-Moon system properties and determined their effect on Earth’s obliquity variations. In the second and third, he varied the locations of individual planets in the solar system and adjusted the overall structure of the solar system to determine the effect on Earth’s eccentricity cycle.

In all three cases, Waltham proved that the actual Earth-Moon-solar system manifests unusually low Milankovitch numbers (degree and frequency of change) compared to alternative planetary systems. He established that the probability Earth would possess these very low Milankovitch frequencies by the operation of natural forces alone is less than 0.00001 (that’s 1 in 100,000). Similarly, the probability that Earth’s Milankovitch variations would be as small as they actually are is also very low. Waltham concluded, “It therefore appears that there has been anthropic selection for slow Milankovitch cycles.”2 His conclusion is based on astronomers’ awareness that slow, lowlevel Milankovitch cycles are essential to the emergence and survival of human civilization on Earth.

Without slow, low-level Milankovitch cycles, Earth not only would be unsuitable for humans, it would also fail to exhibit the stable climate conditions necessary for a wide diversity of life. As Waltham commented, “[P]lanets with Earth-like levels of biodiversity are likely to be very rare.”3

Such provides yet another example of how the more astronomers learn about planetary systems, the more evidence accumulates for the supernatural, super-intelligent design of Earth and the solar system for humanity’s specific benefit.

An expanded version of this article is available here.

Explaining Faster Star Formation in the Past

Grilling a tasty, medium-rare hamburger requires the right kind of fire. Too much heat causes the outside to taste like charcoal. An overly cool...
Astronomy

Why We Need Apologetic Pastors, Part 1

Tim Keller, senior pastor of Redeemer Presbyterian Church in New York City, cautions, “If pastors fail to do their homework in these areas [science,...
Theology

My first job as a pastor was to take survey teams door to door, asking people about the spiritual influences in their lives and...
People