I like climbing mountains. During my Caltech days, a fellow astronomer and I had a 36-hour window between research projects. We quickly packed his car, drove seven hours to a trailhead, hiked several miles to the base of Bear Creek Spire, set up camp, proceeded to summit the Spire (elevation 13,713 feet), downclimbed to our camp, ate the biggest meal of our lives, slept overnight in our tent, and drove back to Caltech early the next morning.

During our brief trip, we saw some of the most stunning and beautiful vistas we had ever experienced. However, we paid dearly for the rapidity of our ascent and for the massive meal we ate. We failed to consider the impact (headaches, rapid pulse, faintness) of such rapid changes in oxygen levels to our brains.

In their paper the team first explained how quantities and ratios of certain uranium and thorium oxides provide a faithful record of changing redox (reduction and oxidation) conditions on Earth. Then they referenced measurements of uranium and thorium oxides in the shale (unaltered rock) record over the past 3.4 billion years to determine the oxygenation history of Earth’s atmosphere and oceans. 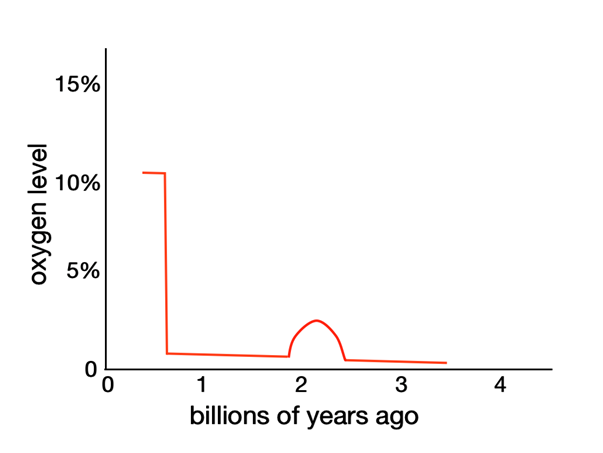 Figure: Oxygenation of Earth’s Atmosphere and Oceans as Indicated by U-Shales

Though not discussed in their paper, the team’s findings buttress the case for the supernatural creation of life and for the accuracy of biblical creation texts. Their discovery shows that insufficient oxygen existed for animal life until after 600 million years ago. At that time two “explosions” of animal life occurred. The fossil record establishes that the Avalon explosion of jellyfish and sponges occurred 575 million years ago, followed by the Cambrian explosion of virtually every conceivable complex animal body plan at 543 million years ago. Both explosions came about without any evolutionary history or delay. The timing and form of both are consistent with the fifth day creation miracles described in Genesis 1: 20–23: “Let the water teem with living creatures.”

Another Reason to Thank God for the Ice Age Cycle

In my new book, Improbable Planet, I list and describe 11 different reasons why a human civilization sustaining billions of humans would be impossible if...
Design

Working at Reasons to Believe provides many opportunities for us to travel around the country and the world, not only to engage skeptics in...
Geology & Earth

Scientists are uncovering more and more data on the phenomenon of animal magnetoreception—which provides the ability of certain species to navigate using the Earth’s...
Geology & Earth