This all-too-familiar slogan has become the rallying cry for insurance companies trying to convince consumers to purchase adequate coverage for their homes and automobiles. But in many ways, it also describes the scientific enterprise. The unexpected is very much a part of the process of scientific discovery and has become commonplace over the last decade.

Paleontologists have repeatedly stumbled upon remnants of soft tissue associated with the fossilized remains of 68-million-year-old dinosaurs, 35-million-year-old mollusks, and, most recently, a 160-million-year-old squid. Soft tissues should readily degrade in a few thousand years, but in these cases they have unexpectedly persisted for tens of millions of years. Such a surprise has led some Christians to question the results.

In the most recent discovery, researchers recovered the fossilized remains of cephalopods (class of marine animals, like squid, that squirt ink) in the UK associated with rock formations that date to about 160 million years. Large, black ink sacs have been remarkably preserved within these specimens. Careful examination of the ink sac contents reveals what appears to be ink composed of granules similar in size and shape to those that comprise the ink of modern cephalopods. Researchers performed a detailed chemical characterization of the ink and determined that the substance displays chemical properties that are similar to the ink found in modern-day cephalopods.1

The discovery generated excitement among the research community because it opens up the possibility for scientists to gain important insight into the biology of Earth’s ancient organisms. Cephalopod ink is composed of a compound called eumelanin, a type of melanin that is dark brown-black. Another form of melanin, pheomelanin, is orange-red in appearance. (Melanin is the pigment that gives human skin, hair, and eyes their color.) These two variants of melanin play numerous biological roles, including: photoprotection, radioprotection, display, camouflage, and predator avoidance. The prospect that melanin can be preserved––in essentially a chemically intact form––for at least 160 million years means that paleontologists can gain critical understanding of the biology of long-extinct organisms from their fossilized skeletal remains and associated melanin.

Some Christians have expressed excitement over the find for a different reason. They claim that this discovery makes it impossible for the fossils to be 160 million years old (and by extension challenges the Earth’s antiquity). Instead, they argue that this breakthrough provides compelling scientific evidence for a young Earth and fossil record that results from a recent global (worldwide) flood.

In many respects, this is not an unreasonable conclusion. Organic compounds are typically rather “delicate” materials that break down readily. Exposure to water, oxygen, and bacteria found in the environment only serves to accelerate the degradation. According to Brian Thomas, a writer for the ICR, “No knowledgeable chemist or physicist would expect eumelanin’s complicated structure to have persisted for 160 million years.”2

As a knowledgeable chemist, I disagree. The chemical stability of organic substances varies considerably. And some organic materials are remarkably robust—eumelanin is one of them. Given its chemical structure, it is not surprising that eumelanin can persist for over 160 million years.

Eumelanin is a polymer, meaning it is a large molecule made up of smaller molecules that are joined together in a chain-like fashion. The nature of the subunit molecules that make up eumelanin and the type of chemical bond between them leads to extensive electron delocalization along the entire backbone of the polymer. This property indicates that the eumelanin polymer is extremely durable and difficult to break down. Moreover, the individual polymer chains of eumelanin are extensively cross-linked with each other, making this material even more resistant to chemical decomposition. 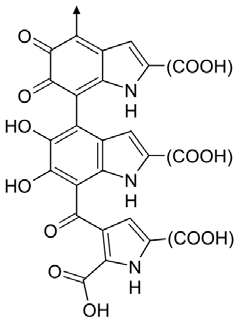 The researchers who discovered eumelanin in the fossilized ink sac noted, “Biomolecules that are polymeric and highly cross-linked in their original state exhibit the greatest resistance to alteration. Melanin, a complex biopolymer, meets this high-resistance criterion.”3

In other words, when its chemical structure is considered, it is easy to explain why eumelanin persists for well over 160 million years. The same is true for chitin remnants associated with 35-million-year-old cuttlefish and collagen fragments recovered from a T. rex femur that dates to be 68 million years in age. These two materials, like eumelanin, are remarkably tough and can reasonably survive tens of millions of years.

So when it comes to the eumelanin associated with 160-million-year-old cephalopod fossils, the “surprise” is no surprise at all from an age-of-the-earth standpoint. Instead, this discovery promises new insight and wonder into ancient organisms and the purpose for their existence.

Facing Up to Big Bang Challenges

What danger lurks in associating big bang cosmology with biblical cosmology? Most Christian physicists, astronomers, and other scientists would say, “None.” Many Christian philosophers,...
Bible

Is the Big Bang Biblical?

Hugh Ross proclaims in the lead article (“Latest Research Beats out the Mixmaster Model”) that the big bang creation model was first described in...
Astronomy