At first glance this evidence seems like a point in favor of the evolutionary paradigm, but a closer look reveals otherwise. Evolutionary models prove that, of all animals, whales manifest the highest probability for rapid extinction and the lowest probability for evolutionary advance. (This is due to a number of factors, including whales’ huge body sizes, low population levels, long generation times, low number of progeny birthed per adult, and sensitivity to environmental stress.) So from an evolutionary perspective, whales have the least likelihood of producing transitional forms. Yet the evidence defies this conclusion. According to the fossil record, at least once every few million years a whale species disappeared only to be rapidly followed up by the appearance of a new and different species. In other words, whales have the greatest, not lowest, number of “transitions” in the fossil record. And these fossils provide evidence for a Creator, specifically for the idea that God created and designed life, rather than simply permitting natural processes to evolve them.

I believe that all these “transitional forms” for whales show up in the fossil record because God likes whales. Knowing their propensity for rapid extinction, He kept on making new ones. Evidence shows an apparent progression from fresh water habitats to sea coastal regions to proliferating throughout all the world’s oceans. God must have had His reasons for gradually expanding both the habitats and populations of whales. A new research study on sperm whales sheds some light on at least one of those reasons and provides us with more understanding for why God is so enamored with whales.

A team of biologists and oceanographers, led by Flinders University biologist Trish Lavery, discovered that sperm whales, in spite of respiring huge quantities of carbon dioxide to the atmosphere, are actually responsible for removing far greater quantities of this greenhouse gas from the atmosphere.1 The team found that credit for the sperm whales’ contribution to relieving the planet from its current global warming crisis goes to what it eats and what it defecates.

Finely-Tuned Predators
Sperm whales (see figures 1–3) rank as the largest predators on the planet. Adult males measure up to 67 feet (20.5 meters) long and 126,000 pounds (57 tonnes) in weight. The sperm whale’s jaw bone alone can be up to 18 feet (5 meters) in length and just one of its 50 plus teeth can weigh in at 2.2 pounds (1 kilogram). The sperm whale is the only predator capable of hunting giant squid and colossal squid (see figures 4 and 5), creatures that can attain 50 feet in length and inhabit the deep depths of the world’s oceans. Sperm whales have been known to dive 9,800 feet (3 kilometers) in search of squid. 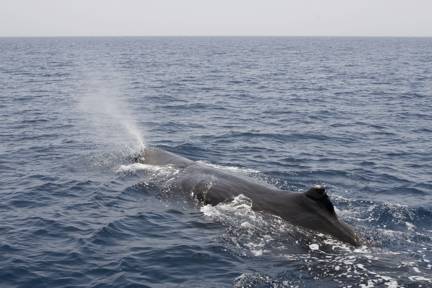 Figure 1: Sperm Whale Surfacing
A sperm whale can hold its breath for up to 90 minutes, longer than any other animal. When it surfaces, its breathing spray can rise up to 50 feet (15 meters).
Image credit: Bobisbob 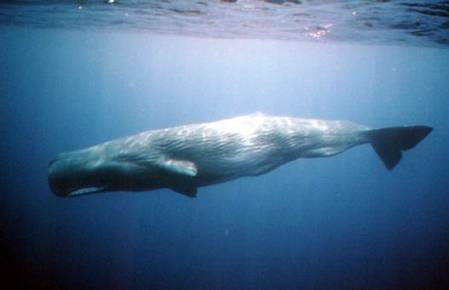 Figure 2: Sperm Whale Preparing for a Dive
Sperm whales are uniquely designed for deep dives. Their flexible ribcage permits lung collapse, which reduces nitrogen intake and minimizes the effects of “the bends.” Owing to an extremely high red blood cell count, whale blood can store a huge quantity of oxygen; and their metabolism can decrease drastically in order to conserve oxygen. Scientists believe the spermaceti organ located in the forehead regulates the sperm whale’s buoyancy during dives.
Image credit: Vossy

Figure 3: Sperm Whale Size Relative to a Human Diver
The Nantucket Whaling Museum in Massachusetts displays a sperm whale jaw bone measuring 18 feet (5 meters) long. This length implies that the individual was a total of 80 feet (24 meters) long. Extensive whaling has so reduced the sizes of sperm whales that it is rare today to find an individual longer than 60 feet (18 meters).
Image credit: Chris Huh 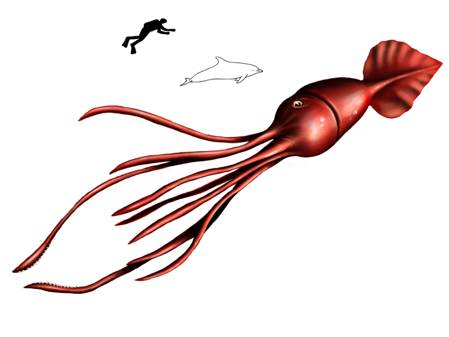 Figure 4: Colossal Squid Size Relative to a Human Diver and a Porpoise
The colossal squid can reach a total length of fifty feet. Its only natural enemy is the sperm whale.
Image credit: Sitron 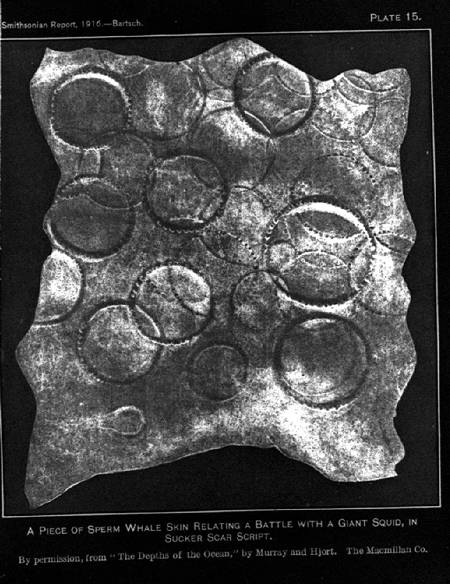 Figure 5: Piece of Sperm Whale Skin Showing Sucker Scars from Giant Squid
Giant and colossal squid put up fierce battles in their encounters with sperm whales. The skin of an older adult sperm whale is covered completely with sucker scars from the tentacles of their prey.
Image credit: J. Murray and J. Hoyt (copyright expired)

Moby Dick’s Carbon “Fin” Print
Giant squid and colossal squid make up the bulk of the sperm whale diet. The squid diet is rich in iron. When feeding, a sperm whale undertakes dives lasting between 30 and 90 minutes, interspersed by eight minute rest periods. Lavery’s research team observed that, while resting on the water’s surface, sperm whales frequently will defecate. Between 85 to 90 percent of the iron ingested by sperm whales is expelled in their feces in the form of ferrous salts. Since most of these feces are liquid, nearly all of the iron is efficiently delivered to the photic zone of the ocean waters. 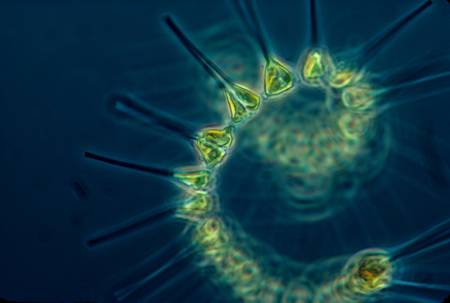 Figure 6: Marine Phytoplankton
Phytoplankton, such as those pictured above, are the foundation of the oceanic food chain. They pump more oxygen into the atmosphere than the rest of photosynthetic life combined, and remove more carbon dioxide from the atmosphere than the rest of life combined.
Image credit: National Oceanic and Atmospheric Administration, MESA Project

Save the Whales
Paradoxically enough, sperm whales stimulate the growth of giant and colossal squid populations. The 440,000 extra tons (400,000 tonnes) of carbon delivered to the deep Southern Ocean as a result of the sperm whales’ iron fertilization ultimately provide the squids with additional food. So, even though sperm whales prey upon these squids, the greater the population of sperm whales the greater the populations of giant and colossal squids and all the fish species they feed upon the deep oceans can support. (The same kind of positive feedback relationship occurs between baleen whales, krill, and all the sea life krill support.) To put it in the negative, the reduction in sperm whale populations brought about by industrial whaling dramatically reduced the phytoplankton biomass, surface and deep sea fish populations, giant and colossal squid populations, and, as Lavery’ team calculated, resulted in at least an extra 2.2 million tons (2 million tonnes) of carbon remaining in the atmosphere annually.2

The research team’s paper was published in the nick of time for both whales and humans. Several leaders concerned about the global warming crisis had actually suggested that reducing or eliminating whale populations would be a good thing. They reasoned that since whales respire such large quantities of carbon dioxide into the atmosphere, their removal would do much to lower the heat-trapping capacity (greenhouse effect) of the atmosphere. Thanks to Lavery’s team, we now know the opposite is true. They close their paper by advocating that the need to respond to the observed warming of Earth’ surface, by itself, is reason enough for the nations of the world to work together to return the world’s whale populations to their pre-Industrial Revolution (pre-1750 AD) numbers.

The paper also inadvertently implies an answer as to why God created a sequence of whale species such that the habitat of all whales gradually increased from just fresh water locales to partly salty river estuaries to the seas adjoining continental landmasses to all the oceans of the world. With the Sun becoming progressively brighter as it continues to convert hydrogen into helium through nuclear fusion in its core (the increasing core density causes the Sun’s nuclear furnace to burn hotter), God stepped in to compensate for the increasing solar luminosity, in part, by progressively creating new species of whales so as to gradually increase the range and population of whales. As these changes took place, the fertilization of Earth’s photic zones increased, resulting in a progressively greater removal of greenhouse gases from the planet’s atmosphere. Thus, even as the Sun brightens, the progressive removal of greenhouse gases from Earth’s atmosphere keeps the surface temperature ideal for life.

In dramatic fashion Lavery’s team has shown us that sperm whales should not be taken for granted. They are a unique species, designed like no other to serve the planet’s life, and human beings in particular. Sperm whales also provide yet one more example of how, when we humans face a crisis or dilemma where it appears we must choose between ethics and economics, we can rest assured that God already designed Earth and its life so that both optimally ethical and optimally economic solutions exist.

One of the most astounding characteristics of Earth's life is its wide-ranging diversity. In fact, life's diversity approaches the theoretically mathematical limit. Of the...
Biology