My favorite running trails are paths through forests with tall trees and floors heavily laden with leaf litter. The trees shade me from the heat, and the thick layers of leaves on the forest floor provide ideal cushioning to protect my ankles and back.

Two botanists, Emma Sayer from the Smithsonian Tropical Research Institute in Panama and Edmund Tanner from the University of Cambridge in Great Britain, reported quantification of leaf litterfall’s role in nurturing the growth and health of forest plants (see figure 1).1 Their data arose from investment in a five-year, large-scale experiment.

Sayer and Tanner divided a semi-evergreen tropical forest region into a number of subplots. Every month they added or subtracted different amounts of litter to or from each subplot. They tracked changes in trunk growth, litterfall levels, and nutrient concentrations in the live leaves, the litter, and the soil. 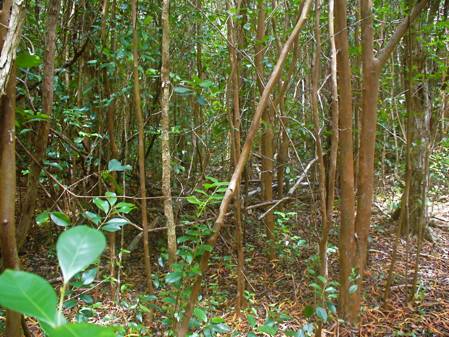 Upon completion of the experiment, Sayer and Tanner observed that plots with the greatest quantity of litterfall (up to the study’s maximum), received the greatest enrichment of inorganic nitrogen and nitrates—the keys to forest growth and health. Those plots most deprived of litterfall were also most deprived of these nutrients. Given that a forest’s vitality is directly proportional to the amount of nitrogen nutrients available, optimized litterfall means optimized biomass for the entire planet.

Though not addressed by Sayer and Tanner, there is a limit to how much litterfall is beneficial. If excessive litterfall accumulates, seeds will not gain access to the soil below the leaf litter.2 Furthermore, a large amount of litter will release sufficient chemical toxins to suppress microbial activities that nitrify the soil.3 Consequently, both too little and too much leaf litterfall will limit the availability of nitrogen nutrients to plants in the forest. In other words, the litter quantity in forests must be fine-tuned in order to maximize the forest biomass and health.

Because Sayer and Tanner’s “long-term” experiment ran for only five years, they did not observe the deleterious effects of too much leaf litterfall. Depending on the forest, leaf litterfall accumulation can become a problem after somewhere between ten and one hundred years. Fortunately, or rather by the design of the Creator, several of Earth’s atmospheric, climatic, geological, and biological characteristics are fine-tuned to ignite forest fires with an average frequency of one per ten to one hundred years. These conflagrations not only remove the litterfall accumulation, they add charcoal, fine dust, and ash to the soil. The charcoal enhances the soil’s water retention and converts sandy soils into more productive clay-like material.4

The fine-tuning of leaf litterfall for the benefit of forests, forest life, and ultimately human beings provides yet another piece of evidence for the anthropic principle. This principle states that long before human beings appeared, the universe, Milky Way Galaxy, solar system, Earth, and all terrestrial life were optimally fine-tuned for the benefit of human beings and for global high-technology civilization. Such extensive, optimized design testifies of a thoughtful, purposeful, all-powerful, all-loving Creator.

Understanding how our galaxy formed—including how it absorbed smaller galaxies through merger events—helps astronomers learn how our spiral galaxy differs from other known spiral...
Design

The Optimal Design of the Genetic Code

When I first read Genesis 1 at age 17, the plate tectonics theory was in its infancy. Researchers were still not certain whether continents...
Design