In trying to explain the fine-tuning of the Sun’s age, I will sometimes tell an audience that stars are like people. They are unstable when young and when old. Only when the Sun is almost exactly middle-aged does it manifest the stable conditions required for advanced life.1 Similarly, our planet Earth is at an exquisitely fine-tuned age for making advanced life possible. There are many reasons why Earth must be 4.57 billion years old, no younger and no older.2

Three Australian astronomers discovered recently that what is true for the Sun and Earth is also true for the Milky Way Galaxy (MWG). In their paper, the three astronomers declare our galaxy is currently experiencing a “midlife crisis.”3

In astronomy young stars tend to be hot and, therefore, blue-colored; old stars tend to be cooler and, therefore, red-colored. Thus, galaxies forming new stars aggressively are blue while galaxies in which star formation has ceased are red. Indeed, as the three astronomers point out, for several decades now researchers have categorized the galaxies in the universe as belonging to either the red population or the blue population (see figure 1).

The MGW, however, does not fit well into either the red or blue category. It’s green—meaning that, while star formation has certainly subsided in the MWG, it has not yet ended. Thus, our galaxy contains both blue stars and stars aged enough to be yellow (but not red). Blended together, these stars give our galaxy a green hue.

The MWG’s spiral arms—very stable, well separated, highly symmetrical, free of any significant warps or bends, and relatively free of spurs and feathers—are one reason advanced life is able to exist in the MWG (see figure 2). In part, these spiral arm conditions are possible because our galaxy is dominated by yellow stars, complemented by significant populations of blue stars. 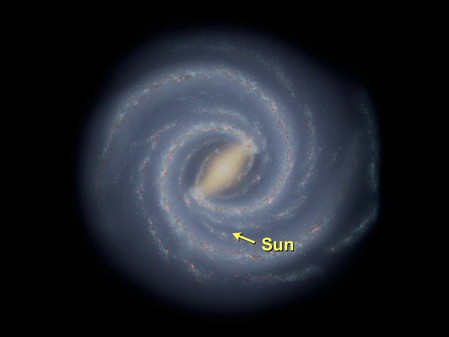 Figure 2: Artistic Rendition of the Spiral Structure of the Milky Way Galaxy
This rendition was constructed from multiple images of portions of our galaxy at many different wavelengths. The galaxy’s 151 known globular clusters have been omitted.
Image credit: NASA/JPL-Caltech, R. Hurt (SSC)

The three Australian astronomers label the Milky Way’s present condition as a “midlife crisis” because its disk lacks both very old stars and large populations of newborn stars. It is experiencing a midlife event in that it is transitioning from a star-forming galaxy to a galaxy where star formation has shut down. But, just as a midlife crisis can inspire people to readjust their priorities, so too the MWG’s midlife crisis transformed it from a galaxy centered on building the required ingredients (carbon, nitrogen, oxygen, phosphorus, calcium, iron, etc.) for advanced life to one that can actually support that life.

In their paper the three astronomers show that the MWG reveals several other unique features that favor the support of advanced life. For a galaxy of its size and mass it is underluminous, which shields Earth from radiation exposure.4 The underluminosity also enables astronomers to explore the MWG and universe in much greater detail and depth. Development of the strongest astronomical evidences for God’s existence and characteristics is, in large part, owed to the MWG’s underluminosity.

Milky Way Galaxy’s possession of two such satellite galaxies as the Magellanic Clouds is also extraordinary (see figure 3). The Large and Small Magellanic Clouds are located 160,000 and 200,000 light-years away, stretch 15,000 and 7,000 light-years across, and contain masses equivalent to sixteen billion and seven billion solar masses, respectively. They rank as the fourth and fifth largest galaxies in the Local Group after the Andromeda, Milky Way, and Triangulum Galaxies. They are the largest satellite galaxies in the Local Group. 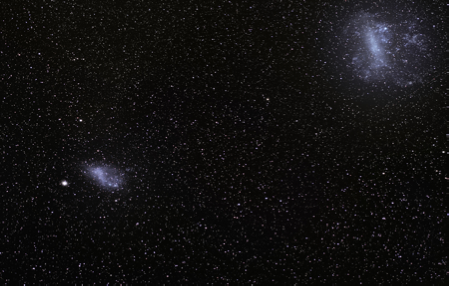 The configuration of the MWG and the Magellanic Clouds is exceedingly rare. Astronomers know of no other such example anywhere else in the universe. One team of astronomers scoured the seventh data release of the Sloan Digital Sky Survey for galaxies roughly analogous to the MWG.5 They found 22,581 isolated MWG analogues. (“Isolated” means the galaxies were not in the immediate vicinity of another large galaxy.) Of these 22,581 galaxies, 81 percent lacked a satellite as large as the Small Magellanic Cloud within 500,000 light-years distance. Only 3.5 percent possessed two satellites as large as, or larger than, the Small Magellanic Cloud within 500,000 light-years distance. This small probability explains why astronomers have failed to find any exact analogues, that is, any true twins, to the Milky Way–Magellanic Clouds system.

The proximity of the Large and Small Magellanic Clouds, their large masses, and their high gas contents allows the tidal forces of the MWG to suck in a steady supply of gas from the Clouds. The Magellanic Clouds are big enough and close enough together that they also are able to funnel a steady supply of small and very gas-rich dwarf galaxies into the maw of the MWG efficiently. This steady, gradual supply of gas sustains our galaxy’s spiral structure without disturbing its overall symmetry and geography.

By comparison, the Andromeda Galaxy, a galaxy with a total mass similar to the MWG, has sustained its spiral structure through relatively infrequent merger events with relatively large dwarf galaxies.6 Consequently, its spiral structure is warped and disturbed to such a degree as to make the galaxy a non-candidate for advanced life. Such warping and disturbance appears to be the norm for large spiral galaxies. As the three astronomers noted in their paper, “M31 [Andromeda Galaxy] is a much better template for a typical spiral” galaxy.7

The three astronomers further note that the MWG has had “an extremely quiet merger history with no accretion of objects [galaxies or globular clusters] more massive than ~109 solar masses in the last ten billion years.”8 Yet our galaxy has maintained its spiral structure thanks to its just-right age, just-right star formation history, just-right pair of large satellite galaxies, and just-right cluster of galaxies.

All these “just rights” cannot be a coincidence. They are one of God’s signature of His careful design of the universe on all size scales—the universe, the Virgo supercluster of galaxies, the Local Group, the Milky Way Galaxy, the Local Bubble, the Sun, the Sun’s planetary system, the Earth, Earth’s surface, and Earth’s life—so that the human race can enjoy global, high-technology civilization and use that civilization to cooperate with God to eliminate evil and suffering once and for all.

Two tests of space travelers’ ability to support themselves independent of Earth have taken place in the Arizona desert (see www.bio2.edu). In 1991 a...
Design

Too Much Galactic Structure

A better understanding of how a galaxy’s spiral arms form reveals the special location and timing of the solar system. As dense molecular clouds...
Astronomy

Thoughts on the Big Bang

Controversy surrounds the big bang theory in both the scientific community and the Christian community. Some scientists reject it because it makes the universe...
Astronomy