There’s no doubt that humans stand far above the rest of the animal kingdom. For example, we display immense mental capabilities, spirituality, symbolic thinking, complex language, reasoning, and creativity. Compare the history of modern humans to that of Neanderthals, which researchers believe was the most intelligent hominid to have existed before humans. Over a period of about 100,000 years, humans advanced from hunter-gatherers living in caves to walking on the Moon. About 300,000 years ago, Neanderthals were also hunter-gatherers living in caves, but when they went extinct approximately 40,000 years ago, they were still cave-dwelling hunter-gatherers.

Now, scientists have discovered another physical capability unique to modern humans. According to biologist Dennis Bramble of the University of Utah and paleoanthropologist Daniel Lieberman of Harvard University, modern humans have a suite of anatomical traits that give us the capability of long-distance endurance running.1 According to these scientists, human endurance runners can, over long distances and under the right conditions, outrun just about any other animal on the planet—including horses, dogs, wolves, hyenas, and antelope. For example, in the Man Versus Horse Marathon held in 2004, an annual race that pits hundreds of runners against dozens of horses with riders in a 22-mile challenging course, a human won.

What is this suite of physical traits? Bramble and Lieberman listed 26, which include the following:

In short, our bodies are beautifully tuned running machines (although not all of us feel so finely tuned). Why do humans have these features? Lieberman and Bramble believe it’s because the first modern humans who lived in the dry savannas of Africa were more successful at catching prey when they ran. Even today, Bushmen hunter-gatherers in the Kalahari Desert chase down kudu antelopes until the animals collapse from exhaustion. Interestingly, the Bushmen do this only when the temperatures climb to near 100 Fahrenheit. At that temperature the antelope cannot shed heat as efficiently as the Bushmen do, so the antelope simply stop running or collapse when body temperature reaches a critical level.

Humanity’s suite of long-distance running traits points to intelligent design by a Creator. Compared to the ape-like australopithecines, which evolutionists claim are our ancestors, modern humans have a “radically transformed body.”2 It is difficult to believe that gradual, undirected evolution could accomplish such a major re-engineering of the hominid body, even over the 4.5 million years since australopithecines traveled via facultative bipedalism.

Another unique capability of humans worth mentioning here is the ability to throw an object at a target and hit it with remarkable precision, even while running. Think of a running ace quarterback launching a football into the hands of a running receiver 100 yards down the field. Likewise, think of an ancient hunter running after prey and throwing a spear that hits its mark. This combination of unique capabilities designed into humans provided us with hunting skills not found in other hominids. Neanderthals could not run like humans do. There is also evidence that Neanderthals’ preferred method of killing involved thrusting spears into prey at close range, rather than throwing the spears from a distance. Such a tactic would, presumably, increase the Neanderthals’ chances of injury from the fleeing or fighting prey animal.

Now a big question: Why would God design us to be endurance runners? After all, all that Adam and Eve had to chase in the Garden of Eden were each other. However, I believe that the omniscient God equipped them with a body that could better fare for themselves once they were cast out of Eden. Here, as we have already noted, a body designed for endurance running would enable Adam and Eve and their descendants to catch animals and put meat on the table.

In only 100,000 years, modern humans have spread over the entire globe and multiplied into billions. This speed of migration has always astounded scientists. It appears that humans were not just born to run, but were born with a wanderlust and the ability to trek long distances. Not surprisingly, since God told his people to multiply and go forth and cover the earth, it seems he equipped them to do so. 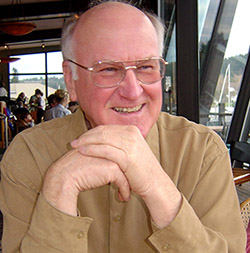 Dr. Olsen earned a PhD in analytical chemistry from Purdue University in 1961 and currently works as CEO of Global FIA, Inc. in Fox Island, WA.

The Latest on Human-Chimpanzee Genetic Comparisons, Part 2 of 2

“I kept thinking the project was a disaster because I couldn’t find any difference,” Mary-Claire King once mused. Ironically, it was the absence of...
Human Origins & Anthropology

Last week presented me with a challenge: teach creation to a group of children at a church that defaults to the 24-hour view—my church.
Theology