Scientists observe that the number of new species to emerge in the recent past (last few million years) is dramatically lower than expected, causing inconsistency with predictions based on genomic data. Here we discuss the root causes of this inconsistency in the evolutionary paradigm and how these findings are better accommodated by the Reasons To Believe creation model.

I love a good mystery, particularly those by Agatha Christie or Sir Arthur Conan Doyle, or even some of the better crime mysteries currently on TV. Have you ever noticed in these stories that the more evidence that’s gathered, the more difficult it becomes to identify the criminal?

A similar pattern occurs in genomics and bioinformatics. Ardent evolutionists state the recent spate of genome sequences provides the best evidence yet for evolution. However, the data raises just as many questions as it answers. In fact, much of the genomic data has underlying implications contradictory to the theory of evolution.1

In a 2007 paper, Olaf R. P. Bininda-Emonds and his team noted, “Molecular [genetic] data and the fossil record can give conflicting views of the evolutionary past.”2 And just this year, researchers Hélène Morlon, Todd L. Parsons, and Joshua B. Plotkin wrote, “This striking inconsistency between phylogenies and fossils limits our understanding of macroevolution, and it undermines our confidence in phylogenetic inference.”3

As an attempt to correct this inconsistency, researchers changed the mathematical models used to generate phylogenetic trees from genomic data. (These trees form the link between the genomic data and fossil record.) These adjustments involved changing assumptions about the rate at which species appear and the rate at which they go extinct. However, these attempts have not been successful in eliminating the problems in the mismatch primarily because scientists do not see new species emerging in the recent past at a rate that matches the rate at which they emerged in the distant past.

Without rapidly appearing new species, scientists remain unable to derive mathematical models that produce valid extinction rates for species. The authors of the paper attempted to resolve the issue by changing the mathematical model. In reviewing this resolution, Tanja Stadler concluded that “the bias of underestimating extinction rates in reconstructed phylogenies will not completely vanish with the [new] methods” because “often lineages do not accumulate faster in the recent past.”4

In a subsequent paper, Stadler provided data to illustrate the decrease in the number of new species emerging in the recent past (figure 1).5 For example, Stadler concluded that the appearance of new mammal species peaked between 33 and 30 million years ago and declined significantly at 8.55 and 3.35 million years ago. 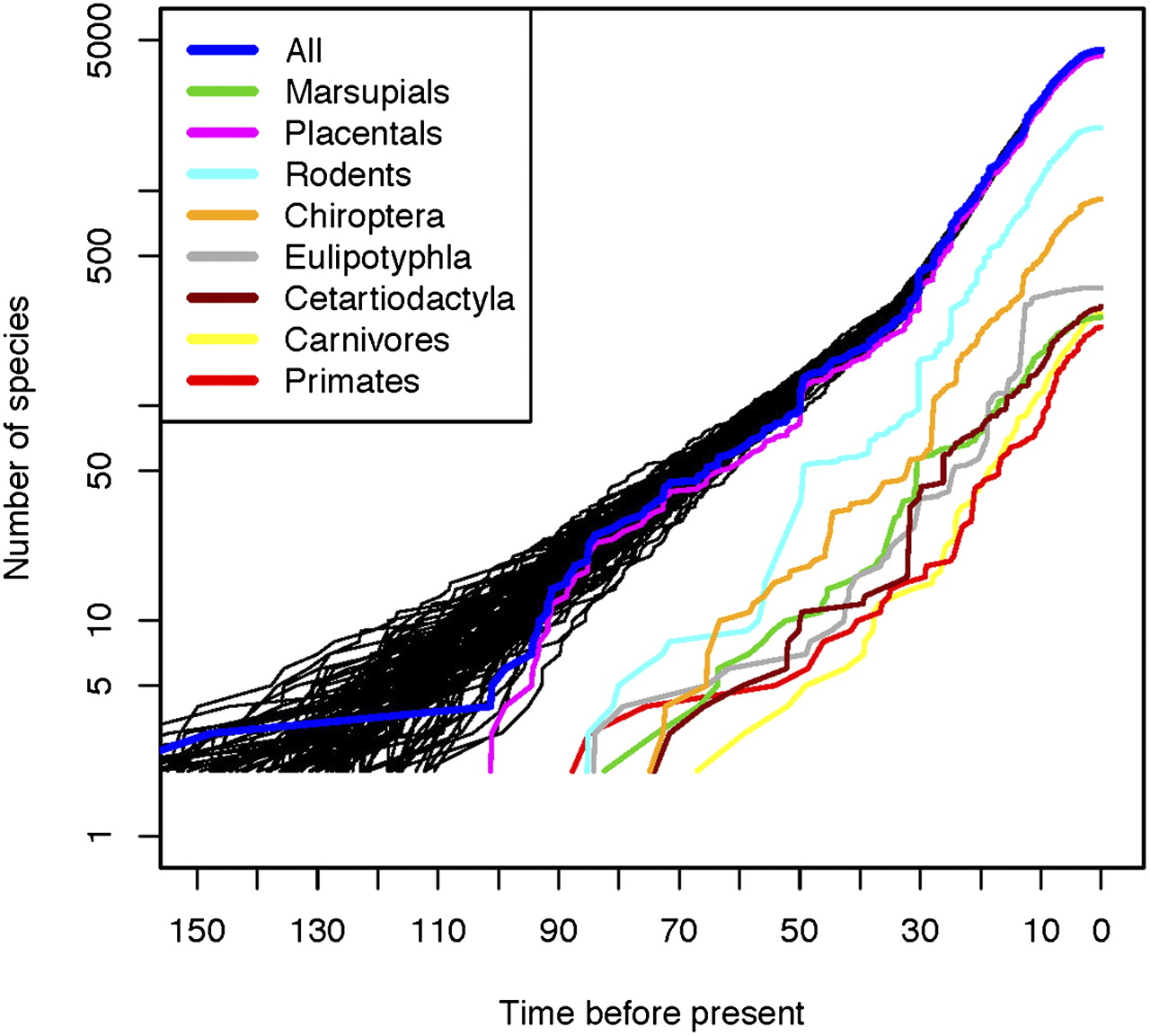 Figure 1. Number of species plotted against time before present in millions of year. Note that the number of species levels off as they approach the recent past. Credit: Tanja Stadler, “Mammalian Phylogeny Reveals Recent Diversification Rate Shifts,” PNAS 108 (April 12, 2011): 6187–92.

Although the dearth of new species in the recent fossil record does not comport with evolutionary predictions, it does fit with the Reason To Believe creation model. We believe God ceased creation after the sixth day (Genesis 2:1–3), thus, we would expect the number of new large-bodied species emerging through adaptive processes (such as “Mouse Genomes Do Not Reflect a Single Evolutionary Story” (podcast), “Orangutan Genetic Diversity Sheds Light on Humanity’s Origin” (article), and “Were They Real? The Scientific Case for Adam and Eve” (article).

Q&A: Are There Transitional Intermediates in the Fossil Record?

Many people understand this term ("Transitional Forms") to refer to one or more of the organisms that comprise the stepwise, evolutionary transition of one...
Evolution

Why do people gravitate toward religion as they age?

While waiting in a doctor’s office recently, I checked out an article in AARP The Magazine titled “Life After Death.” Its stated purpose: In...
Evolution

Mismatches between Genetic Data and the Fossil Record