“There is a time for everything and a season for every activity under heaven” (Ecclesiastes 3:1).

Bible believers normally use this scriptural wisdom when discussing circumstances and events, but perhaps you’ve noticed it’s true of your body, too.

Each of us possesses an internal “clock” that tells us when to get up, when to sleep, and even when to eat. And you thought you were independent! Scientists call the tick of this clock the circadian rhythm. Just as the gears in a watch track each minute, so the rising and falling of key signaling molecules in cells keeps time for an entire organism. The gene circuit responsible for regulating this organic clock represents a classic example of a natural biological oscillator.

An oscillator is a system that dynamically varies between two fixed points generally with a fixed period (or time in between points) such as a pendulum, a mass-spring system, or an atomic clock. Synthetic biologists are particularly interested in learning how to construct genetic oscillators because of these systems’ ability to generate periodic responses. Such a system could be therapeutically useful by periodically administering a drug or expressing a protein such as the hormone insulin.

In 2000, researchers at Princeton University designed one of the first genetic oscillators, known as “the repressilator.”1 The repressilator is a three-ring oscillator of repressors (proteins that block protein production from specific genes.) As the scientists explained in their report, “the first repressor protein, LacI, inhibits the transcription of the second repressor gene, tetR, whose protein product in turn inhibits the expression of a third gene, cI. Finally, CI inhibits lacI expression, completing the cycle.”2

This type of oscillator is comparable to a three-way game of “rock-paper-scissors,” in which each player chooses a different hand symbol. As the players go around, rock smashes scissors, but rock is covered by paper, which is cut by scissors. No one can win all the time, and the winner continually varies in time as the players go around trumping each other. This is a three-ring oscillator at work. 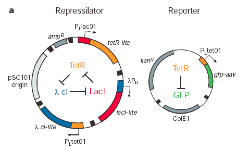 Figure 1. The repressilator. On the left, the genetic design of the plasmids (circular genetic elements) that were used to implement the oscillating network in bacteria. Note the three-ring repression architecture shown in the center of the left plasmid. At right are images of cells blinking on and off over time as GFP levels rise and fall. The fluorescence of one cell (highlighted with the arrow) is tracked in the graph below. Notice how the brightness periodically increases and decreases in this one cell.3

The repressilator became the first oscillator to demonstrate that a synthetic oscillating network could be constructed from parts unrelated to existing natural biological clocks. Indeed, as one of the most notable achievements in synthetic biology, the repressilator has become a symbol for rational network design. However, it did not function as well as its natural counterparts. Over time the oscillations became increasingly erratic and could not be synchronized across a population of cells. Natural oscillators are extremely reliable and can eventually adapt to new environments (like when humans recover from “jet lag” by adjusting to a new time zone). Despite the limitations of the initial constructs, researchers did not give up on building an improved synthetic oscillator.

In 2002, researchers at the University of California, San Diego (UCSD), set out to build a  more robust and tunable synthetic genetic oscillator from bacterial genes and regulatory sequences.4 Most natural oscillators have both positive and negative feedback loops driving their activity, so the UCSD team put together a circuit that reflected this feature. Each gene in the UCSD team’s design is controlled by the same promoter (gene regulatory element in the DNA). A promoter is the sequence of DNA that controls the transcription of genes from DNA to RNA. One of the genes, araC, induces the promoter to express (make) the proteins AraC and LacI in the presence of arabinose. The other gene, lacI, turns off expression of both in the presence of isopropyl β-D-1 thiogalactopyranoside (IPTG).

Without either AraC or LacI, the system starts making both proteins, but eventually the levels of LacI rise and repress expression. Over time, as the protein levels fall, expression begins again, and the whole process repeats again and again. The researchers determined the output of the system by measuring the levels of a green fluorescent protein (GFP) that uses the same promoter as the circuit. When the circuit expression is “OFF,” the GFP levels drop (just like AraC and LacI); when it’s “ON,” they rise.

It was observed that GFP levels rose and fell reliably not just in one cell but synchronously across most of the population. Additionally, the UCSD team’s oscillator didn’t easily break when faced with changing conditions, thus proving its robustness. The crowning achievement of their work was showing that the period of the oscillations could be tuned by changing the concentration of arabinose and IPTG in the extracellular environment and by changing the temperature of the environment. By decreasing the temperature or increasing the concentration of arabinose, the scientists could increase the period. Increasing the levels of IPTG decreased the period. These results shed light into how extracellular signals, such as sunlight, might change the period of oscillations in natural clocks that govern processes like the circadian rhythm.

The UCSD team began their work by modeling the proposed network; it took them six years to realize the model in living cells.6 The time, effort, and diligence required to achieve this improved synthetic oscillator underscores the intelligence and sophistication in natural biological oscillators. Though extremely impressive when compared to previous generations of synthetic oscillators, this latest development still does not reach the levels of synchronization and range of tuning seen in natural biological clocks.

As researchers continue to investigate the details of how natural biological systems implement important genetic programs, we can expect to be amazed by the strategies displayed in nature. The field of molecular systems biology (MSB) is paving a course that features incredible panoramas of God’s hand at work. The perspective provided by MSB continues to leave researchers with the weighty impression of actual design in biological systems.

My mother’s side of the family is Germans from Russia. Drawn to Russian culture, my mother loved collecting babushka dolls. When she downsized a...
Biochemistry

In 1978, three scientists (Hamilton Smith, Werner Arber, and Daniel Nathans) were awarded the Nobel Prize in Physiology or Medicine for the discovery of...
Biochemistry

I enjoy watching The New Yankee Workshop and Ask This Old House. Both of these programs showcase the skills of master craftsman Norm Abrams...
Biochemistry