Advancing science continues to reveal that we live in a just-right universe. Our universe exhibits three truly astounding features: it is presently extremely large, every region of the universe is thermally connected to every other region, and its shape is geometrically flat. All of these amazing cosmic features are necessary for physical life to exist in the universe and without cosmic inflation, we wouldn’t have them. 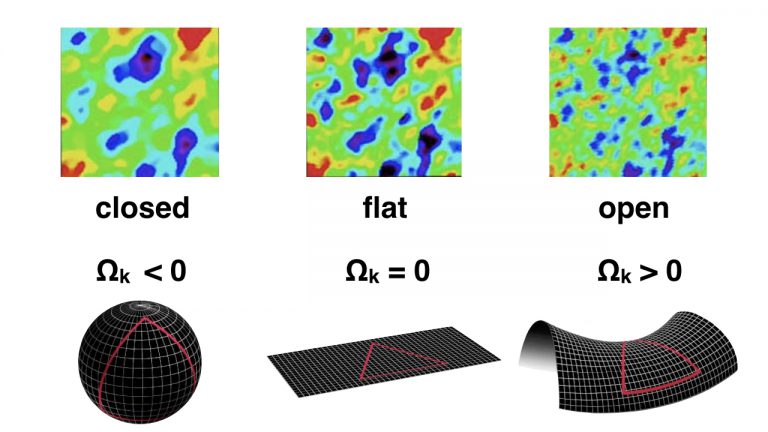 Figure: Possible Cosmic Geometries. Only in a universe that is very close to possessing a flat geometry will galaxies, stars, and planets form that are necessary to make life possible. Image credit: NASA. Diagram credit: Hugh Ross

Cosmic Inflation Necessary for Life
The thermal connectedness, vast size, and flat geometry of the universe that presently exist would be impossible if the universe expanded from the cosmic creation event at a rate that never exceeded the velocity of light. An extremely brief inflation episode, lasting from less than 10-36 to 10-32 seconds after the cosmic creation event, where the universe expands by at least a factor of 1026 (from smaller than a proton to about the size of a grapefruit, or about a trillion trillion times faster than the velocity of light) when the universe is very young (10-36 to 10-32 seconds old) solves all three problems.

First, the hyper-accelerated expansion of space during a brief inflation event would stretch out any initial variations in matter, density, or temperature, such that the universe becomes homogeneous and uniform on large size scales—on the largest size scale to about one part in one hundred thousand. Second, temperature differences among regions in the universe would get reduced to only about one part in a hundred thousand. And third, the curvature of space would get reduced to where it measures to be flat to at least four places of the decimal.

Observational Confirmation of Cosmic Inflation
These outcomes are not only what is needed to make life in the universe possible, but they’re also what astronomers have determined by their measurements to be true about the universe. The ongoing Sloan Digital Sky Survey of galaxies and galaxy clusters1 and the Planck2 and WMAP3 maps of the cosmic microwave background radiation (CMBR) have yielded undeniable affirmations.

An analysis of the two best maps to date of the CMBR, plus the best map of the baryon acoustic oscillation, yielded a value for ns = 0.9658 ± 0.0038.4 This measurement is a major improvement on the previous best measure of ns that I wrote about in my book The Creator and the Cosmos, 4th edition: ns = 0.9593 ± 0.0067.5 The error (uncertainty) in the new measure, ±0.0038, implies there is less than 1 chance in 6 quintillion (1 chance in 6,000,000,000,000,000,000) that the universe did not experience an inflation event very early in its history.6 This measure of certainty that the universe must have experienced an inflation event compares with 1 chance in 900 million that it did not, based on the previous best measure.

The error measure, ±0.0038, also implies there is less than 1 chance in 16,000 that the universe experienced a simple—as opposed to a complex—inflation event. However, in the physical sciences an event is not considered certain unless the probability of an alternative outcome is less than 1 chance in 1,750,000. Therefore, astronomers have yet to determine exactly what kind of inflation occurred in the very early history of the universe. It appears, though, regardless of what kind of inflation occurred, the event must have been fine-tuned for physical life in the universe to be possible.

Readers wanting a more in-depth description and explanation of how an early cosmic inflation event must be fine-tuned to make physical life possible will find it in my book The Creator and the Cosmos, 4th edition, 68–69.

Our Sun is a star like no other. I have discussed the Sun’s amazing design in one published book, a forthcoming book,1 and in...
Astronomy

Japanese engineering physicists have developed a technology that could dramatically increase the evidence for the biblically predicted big bang creation event and for the...
Astronomy