When we think about volcanoes, the images that typically come to mind are violent eruptions that devastate the surrounding landscapes and bring death or serious injury to anyone so unfortunate as to be in the vicinity. Figure 1, for example, shows the lava flows from the 1985 eruption of the Nevado del Ruiz volcano, which killed more than 23,000 people and destroyed the town of Armero, Colombia. 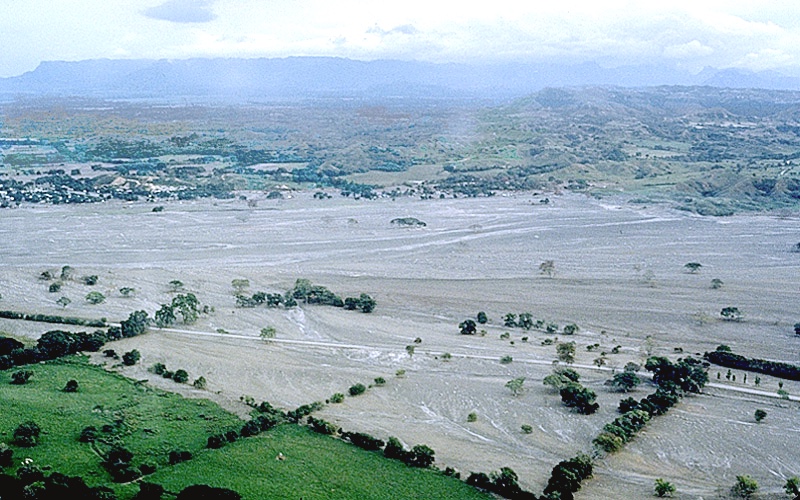 People are quick, however, to return to the regions near recent volcanic eruptions. The reason why is that the volcanic rocks and ash from eruptions contain stores of rich nutrients that yield bumper harvests of food crops.

This curse and blessing of volcanic eruptions raises an interesting question: wouldn’t it be great if volcanic eruptions were especially frequent when nobody lived near the volcanoes and especially infrequent when people were exploiting their rich soils for food? A recently published paper by five geologists shows that such a marvelous timing has indeed occurred, and it ranks as yet another fine-tuned feature of our planet that allows humans to enjoy sustained global high-technology civilization.

The paper published in Quaternary Science Reviews updates a hypothesis, based on evidence that volcanic activity in Iceland increased after the last glacial maximum, that deglaciation produces enhanced volcanic activity.1 The five geologists reanalyzed the four longest and most reliable tephra records.

Tephra is fragmented material ejected by a volcanic eruption regardless of fragment size, composition, or how the fragmented material got to its location. Where the tephra is hot enough, it will fuse together into pyroclastic rock or tuff (volcanic ash compacted to form solid rock). Figure 2 shows tephra layers from multiple eruptions of the Hekla volcano.

All the tephra records exhibited the Milankovitch periodicities of precession (23,000 years), rotation axis tilt (41,000 years), and orbital eccentricity (approximately 100,000 years). I have written previously about Earth’s Milankovitch cycles here,2 here,3 and here,4 and how they in large part explain the repeated episodes of glaciations and deglaciations that characterize the ice age cycle of the past 2.588 million years.

All the tephra records show that periods of increased volcanic eruption frequencies coincide with the dramatic deglaciations that occur at the glacial-interglacial transitions. Evidently, the release of the load of ice and snow on the continental landmasses ignites volcanic eruptions.

The long duration tephra records in this study, however, add up to just four. Thus, the five geologists call for “more precise tephra time series (preservation and age optimized) from different regions (glaciated versus non-glaciated) and geological settings (island arcs, continental arcs, intraplate)”5 … “to decipher the impact of these factors on a global perspective of how climate may control volcanism.”6

Enhanced volcanic eruptions at the beginning of an interglacial period imply that much of Earth’s continental landmasses and its lakes, rivers, and oceans receive a delivery of nutrients that allows microbes, vegetation, and animals to flourish. This fertilization event coincides with another fertilization event that I wrote about in Improbable Planet. I stated there that at the beginning of an interglacial “fine loess (wind-blown dust) from dried-out parts of the floodplains of glacial braided rivers carried layers of crucial nutrients onto the lowland plains below, making them richly fertile.”7

As I have explained in another blog,8 the interglacial we are experiencing right now is unique. It is the longest lasting interglacial and the only one where there has been an extended duration (9,500 years) of extreme climate stability. The current warm period has followed the most severe glacial period in the entire ice age cycle.

The severity and rapidity of the deglaciation from that glacial period resulted—at the time of the beginning of our interglacial period—in the greatest delivery of fine loess and other nutrients from volcanic eruptions. These especially intense and simultaneous fertilization events, to a large degree, explain why humans today are able to grow so much food on Earth’s plains and valleys and why we are able to harvest so much shellfish and other fish from Earth’s oceans, seas, lakes, and rivers.

These especially intense and simultaneous fertilization events give us more reasons to thank God for his supernatural blessings poured out on humanity. They also demonstrate that God planned in advance that billions of us would experience sufficiently high-technology civilization that makes possible the rapid spread of his message of redemption from human sin.

“Junk” DNA Not so Junky

A recent report by researchers from the University of British Columbia (UBC) provides new evidence that non-coding DNA (typically referred to as “junk” DNA...
Biology

Which model, naturalistic evolution or supernatural creation, best explains the pattern of life’s history on Earth? If a test produces “strikingly divergent results” for...
Biochemistry