For those of us who live in the northern hemisphere, December is a good time to remind everyone about the Sun. It is the month when the Sun spends the fewest hours per day above the horizon. Where I was raised in coastal British Columbia, December was also a month characterized by incessant rain. I remember several Decembers when the Sun never made its appearance in the sky.

The Sun has made a dramatic appearance in one of the December issues of Astrophysical Journal Letters. Three astronomers, Christopher Spalding, Woodward W. Fischer, and Gregory Laughlin, have published a paper in that journal where they propose using Milankovitch cycles to resolve an outstanding problem in our understanding of the Sun.1 That resolution may yield evidence for the fine-tuning of Earth’s features that make advanced life possible.

I have written about Milankovitch cycles before;2 they are tiny variations in the tilt of Earth’s rotation axis and the shape of Earth’s orbit about the Sun. The solar problem Spalding, Fischer, and Laughlin seek to resolve is known as the faint Sun paradox.

Faint Sun Paradox
The faint Sun paradox is the conflict between the recognition that life has been present on Earth’s surface for the past 3.8 billion years and the fact that the Sun has brightened by 25–30 percent over the same time period. Scientists know that a decrease of only 1–2 percent in the Sun’s brightness, under current atmospheric conditions, would generate a runaway freezing that would transform Earth into a giant snowball. They also know that a 1–2 percent solar brightening would boil away all Earth’s rivers, lakes, and oceans and cook all life. Thus, scientists have been challenged to ask: How did life originate, survive, and ultimately thrive on Earth through billions of years of ongoing increase in the Sun’s brightness?

In previous blogs3 I wrote about how it takes a combination of adjusting the quantity of greenhouse gases in Earth’s atmosphere, the Sun’s mass, the Earth’s albedo (reflectivity), and the quantity and types of life on Earth’s surface to have any hope of resolving the faint Sun paradox. In chapter 12 of Improbable Planet, I demonstrate how it takes a careful integration—over the past four billion years—of sixteen different compensating factors to resolve the paradox.4

Of the sixteen factors I addressed in Improbable Planet, the two most important are (1) the different kinds and quantities of greenhouse gases in Earth’s atmosphere, and (2) the Sun’s mass throughout the past 3.8-billion-year history of life. I also described how paleoclimatologists now possess a good understanding of the past history of Earth’s greenhouse gases. Astronomers, on the other hand, while knowing that the Sun’s mass at the time of life’s origin must have been larger than it is today (the solar wind results in a steady loss of mass from the Sun), still lack an accurate measure of how much larger it was.

Determining the Sun’s Past Mass
The subject of Spalding, Fischer, and Laughlin’s paper is a method they have developed by which geologists and planetary astronomers can determine, in a straightforward manner, the Sun’s mass at different dates in its history. The trio first point out that even a slight change in the Sun’s mass can make an enormous difference in its brightness. The ongoing fusion of hydrogen into helium in the Sun’s nuclear furnace would cause the Sun to grow brighter by about 25 percent over the past 3.8 billion years, on the assumption that the Sun’s mass had not changed. However, if the Sun was about 5 percent more massive 3.8 billion years ago than it is today, and if the Sun lost mass at a continuous fixed rate throughout the past 3.8 billion years, then the Sun’s brightness would have been constant over that time.

For a number of known reasons that I explain in Improbable Planet,5 the Sun’s mass could not have been as much as 5 percent larger than it is today. There is no need, though, for it to be so large. Paleoclimatology data establishes that the quantities of greenhouse gases in Earth’s atmosphere were much greater than they are today. These additional greenhouse gases would have trapped much more of the Sun’s heat, thereby offsetting the Sun’s lower brightness.

The bulk of the three astronomers’ paper explains an observational proxy they have found to measure the Sun’s past mass at different epochs to a precision of greater than 1 percent. The observational proxy is to use sedimentary rock layers on Earth and on Mars to determine the specific period of oscillation of the variation in the orbital eccentricity for Earth and Mars, respectively (see figure 1). 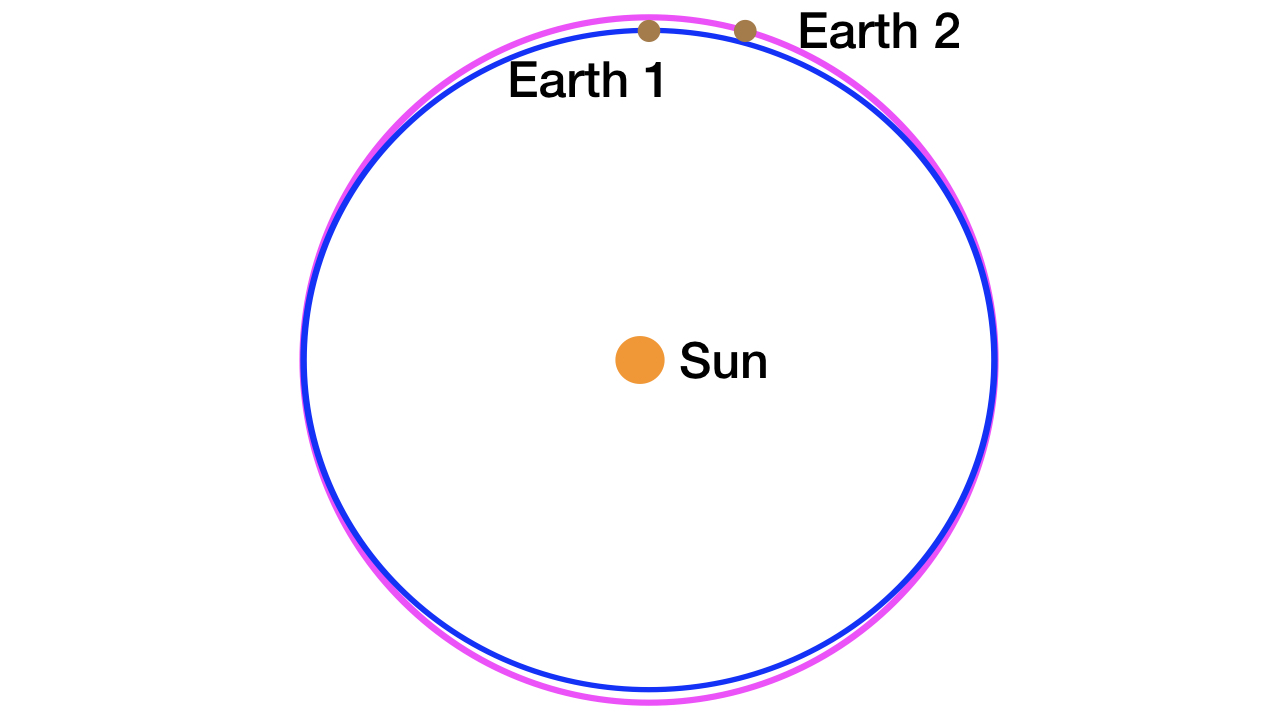 Figure 1: Variation in Earth’s Orbital Eccentricity. The eccentricity or ellipticity of Earth’s orbit varies cyclically with a period that depends in part on the Sun’s mass. The blue orbital path shows Earth on a more eccentric orbit than the magenta orbital path. Diagram credit: Hugh Ross

Spalding, Fischer, and Laughlin showed that as the Sun’s mass decreases, the period of oscillation in the orbital eccentricity for both Mars and Earth increases. Figure 2 is taken from their paper showing how the period of the eccentricity variation for Earth and Mars increases over the past history of the solar system in the example of the Sun losing 5 percent of its mass over the past 4.5 billion years. 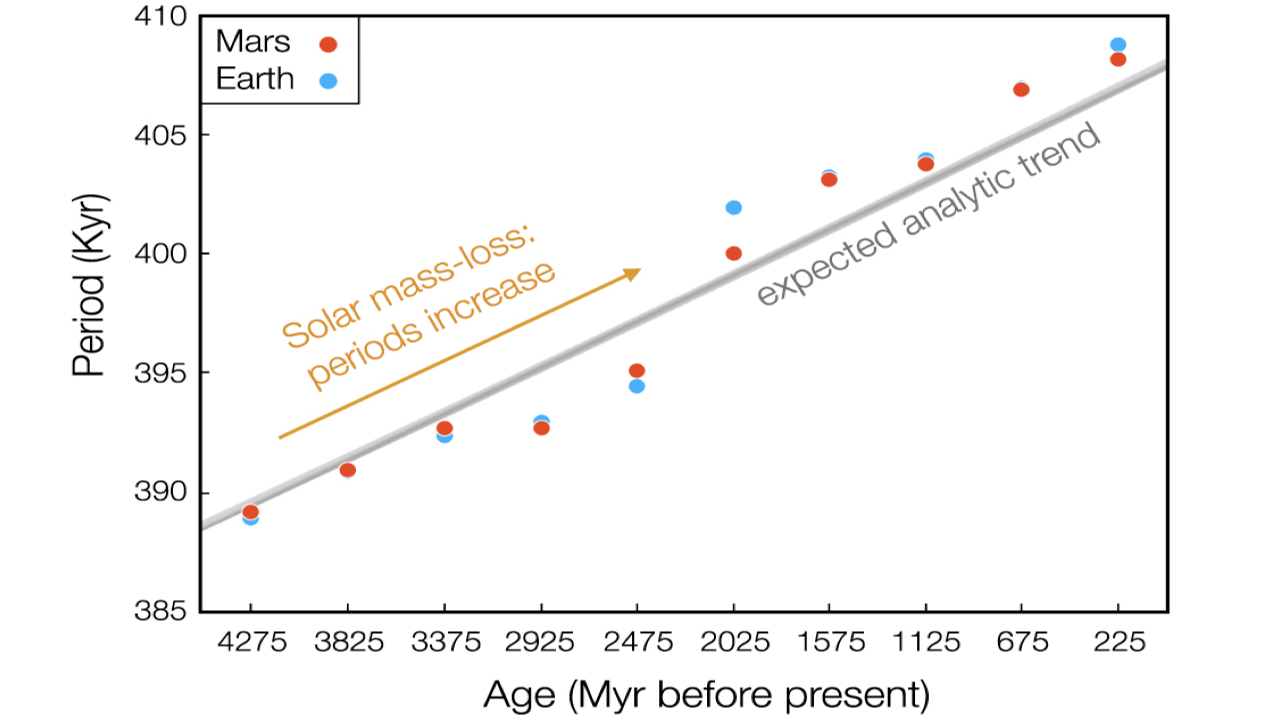 Figure 2: Increase in the Orbital Eccentricity Periodicity for Earth and Mars in the Case of the Sun Losing 5 Percent of Its Mass over the Past 4.5 Billion Years. Diagram credit: Spalding, Fischer, and Laughlin

Banding within laid-down sediments, in particular, shallow water carbonate platforms and banded iron formations, reveal the period in the cycle of Earth’s orbital eccentricity in deposits as old as 2.5 billion years.6 A limitation in measuring the period of Earth’s orbital eccentricity in deposits older than 2.5 billion years is that Earth’s plate tectonics and surface weathering have severely altered the banding in those deposits. This limitation is much less of a factor on Mars. Most of the Martian surface offers a pristine record of past sedimentary deposition that extends back to 4 billion years.

Evidence for Design Now, More to Come
As the team explains, measurements of the banding in ancient sediments on Earth and Mars will provide scientists with an accurate determination of the Sun’s mass throughout the past four billion years. This knowledge will not only show how the faint Sun paradox is resolved but also reveal the specific fine-tuning in the design of most of the sixteen factors I cited in chapter 12 of Improbable Planet. That design makes possible 3.8 billion years of life history on Earth that in turn made human civilization possible. In these exciting times, we can look forward to yet more evidence for the super-intelligent handiwork of the God of the Bible in preparing Earth and its life for the entry of human beings and their launch of global high-technology civilization.

Good mental health critically depends on the recognition of self-worth. Self-worth comes from the discovery that one is uniquely designed to fulfill a specific...
Geology & Earth

How often have we heard the phrase that something will not happen until hell freezes over? The phrase is always used to refer to...
Origin of Life & Astrobiology

The most important biblical doctrine related to creation is creation ex nihilo, which means “creation out of nothing.” This theologically fundamental belief was taught...
Bible