Not a week goes by that I don’t get at least three questions about global warming. Frequently, what underlies these questions is a concern, and sometimes outright panic, that all the ice fields and glaciers in Antarctica, Greenland, and the Himalayas will melt and drown out all the coastal cities of the world where over a third of world’s population currently lives. Adding to this concern and panic is the worry that global warming will raise summer daytime temperatures in inland cities to such a degree that millions of people without air conditioning will die from heatstroke.

Ice Age Cycle Temperature Variation
My first response to global warming questions is to remind inquirers that we are in an ice age cycle. That cycle, driven by sinusoidal (wave pattern) variations in the ellipticity of Earth’s orbit about the Sun and in the tilt of Earth’s rotation axis, implies that inevitably the global mean temperature will rise and fall in response to the cycle. 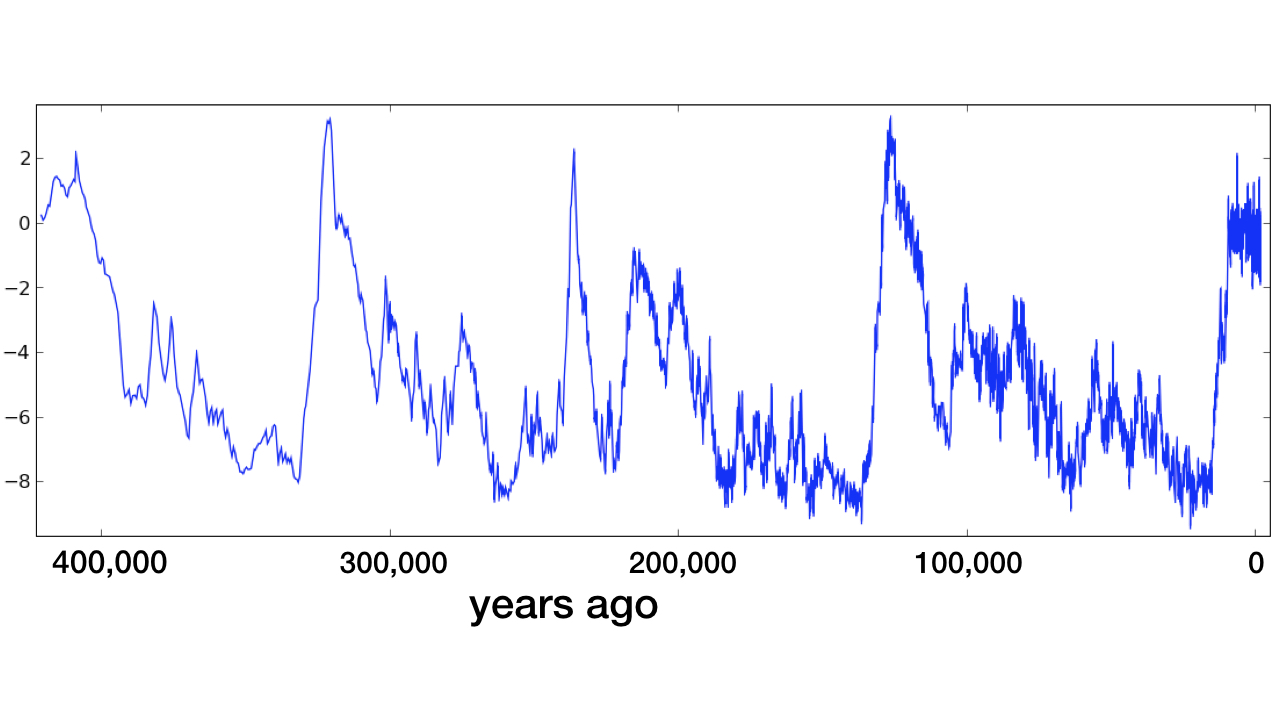 The data indicate that we should be much more concerned about an extended period of global cooling than we are about a brief episode of global warming. In order to better prepare for and ameliorate the impact of an extended period of global cooling, we should seek a resolution to the paradox of how brief episodes of global warming bring on long periods of global cooling. In the July 2018 issue of Geophysical Research Letters, researchers published two papers pointing to significant steps toward resolving that paradox and gaining the understanding we need for our future well-being.

How Global Warming Brings On an Ice Age
The first of these papers addresses the consequences of the looming loss of the Arctic ice cap. This loss is dramatic, owing to the fact that the ice cap is, at most, just a few meters thick and Arctic air temperatures have increased at double the average global rate. Surface air temperature over land north of 60°N has increased by an average of 3.5°C (6.3°F) since 1900.1 Figure 2 shows that from 1982 to 2012, about half of the summer Arctic ice cap has melted away.2 Assuming the present rate of greenhouse gas emissions in the future neither increases nor decreases, the best climate models predict that by 2050 the summer Arctic ice cap will be completely gone.3

As Arctic sea ice continues to disappear, the newly opened waters of the Arctic Ocean, with their much lower albedo (reflectivity) than ice and snow, will absorb much more heat from the Sun. This extra heat will increase the temperature and moisture content of the overlying atmosphere, which will deliver more precipitation to the landmasses adjoining the Arctic Ocean (primarily Canada and Russia). This consequence of the shrinking Arctic ice cap has been understood and confirmed since 2010.4

In a new study, a team of four geoscientists has demonstrated the much more remote response (in other words, what would happen closer to the tropics where most people live) to Arctic ice loss.5 The team investigated the global climate outcomes from the abrupt loss of Arctic sea ice using the computer simulation, Community Climate System Model version 4, in two different configurations: (1) a thermodynamic slab mixed layer ocean, and (2) a full-depth ocean that includes both dynamics and thermodynamics.

The team’s computer simulations showed that within 20–30 years after Arctic sea ice loss, the tropical oceans are greatly impacted. This time frame is much faster than what previous, less sophisticated models had indicated.6

In particular, the simulations showed that the surface and subsurface ocean layers down to a depth of at least 200 meters are warmed considerably. This enhanced ocean water warming is much more pronounced in the northern hemisphere than in the southern hemisphere. The simulations predict that precipitation over the northern mid-latitude Pacific Ocean and over the adjoining landmasses dramatically increases.

Figure 3: Maximum Extent of Thick Ice Cover of the Northern Hemisphere During the Last Ice Age. The turquoise-colored parts of the map indicate those regions covered by ice at least 3 kilometers (2 miles) thick. Winter sea ice extended as far south as Mexico in the Pacific and North Carolina and Spain in the Atlantic. Image credit: John S. Schlee, United States Geological Survey and Hannes Grobe, Alfred Wegener Institute for Polar and Marine Research.

Today, both northern Canada and northern Siberia, in spite of a 3.5°C (6.3°F) rise in temperature since 1900, are more than cold enough for snow to remain frozen and accumulate to form large sheets of ice. The reason such ice sheets are not forming now is that both northern Canada and northern Siberia are deserts. Neither region gets more than the equivalent of 10 inches of precipitation.

The melting of the Arctic ice cap will dramatically increase the precipitation over northern Canada and northern Siberia. Much more snow will fall upon those regions, causing huge ice sheets to form there. Meanwhile, as the study produced by the four geoscientists demonstrates, within two or three decades after the melting of the summer Arctic ice cap, precipitation will dramatically rise over the landmasses adjoining the North Pacific Ocean and, to a lesser degree, the North Atlantic. Because of the global cooling that will result from northern Canada and northern Siberia being covered with giant ice sheets, much of the precipitation falling upon southern Canada, southern Siberia, northern United States, and Western Europe will be snow. This additional snow will extend the coverage of Earth by thick ice sheets to the degree displayed in figure 3.

According to the geoscientists’ research and the other studies cited here, we could see the dawn of the next ice age within a century and its full onset within a millennium. In the same issue of Geophysical Research Letters, three scientists at the Norwegian Institute for Air Research show that mineral dust deposition in the Arctic conceivably could bring about an even more imminent dawn of the next ice age.7 Because of this mineral dust’s low albedo (reflectivity), it warms up the snow and ice upon which it falls. The three Norwegian scientists calculated that mineral dust deposition warms up the Arctic ice and snow by 0.135 watts per square meter.8 This extra heat implies that the Arctic ice cap could melt away a lot more rapidly than what calculations based solely on enhanced greenhouse gases predict.

Little did I know that, from a young age, milk was playing an important role in my health. It turns out milk is beneficial—but...
Biology

One of my favorite U2 songs is “I Still Haven’t Found What I’m Looking For.” For me, it’s a reminder that because of Christ,...
Biology