How often have we heard the phrase that something will not happen until hell freezes over? The phrase is always used to refer to things that are impossible.

The earliest era of Earth’s history is referred to as the Hadean era, the epoch when Earth’s surface was hellishly hot. Planetary astronomers believe Earth’s surface had to be hellishly hot because of the intense bombardment of Earth at that time by planetesimals, asteroids, and comets.

What the New Evidence Shows
A recently published paper by three University of Colorado astronomers presents the first-ever dynamically self-consistent model for the formation of the Moon’s tidal-rotational bulge. This model provides evidence that previous to four billion years ago, Earth’s hydrosphere, rather than being hot steam, was, in fact, predominantly frozen.1

The Moon’s gravity raises up tides in Earth’s oceans from just a few inches in the Mediterranean, Baltic, and Caribbean Seas to a maximum of 53 feet high in Canada’s Bay of Fundy. Earth’s tidal forces on the Moon are much stronger than the Moon’s tidal forces on Earth. In the past, they were even stronger. Earth’s gravity has raised up solid rock tides on the Moon that are more than a kilometer high.

The model produced by the three astronomers showed that the fossilization of the Moon’s bulge was not a rapid process. It was a slow process that lasted several hundred million years. Nevertheless, the fossilization was completed 4 billion years ago when the distance between the Moon and Earth was only about 128,000 miles. (Present average distance between the Moon and Earth = 239,000 miles.)

In the context of much stronger lunar tidal forces exerted on Earth, for Earth to be less dissipative to lunar tides its water had to be predominantly in a frozen state. A frozen Earth previous to 4.0 billion years ago conflicts with the notion of a hot one from asteroid and comet collisions. It would be consistent, however, with the Sun being 30 percent fainter at that time

Once the Sun’s mass stabilizes shortly after its formation, the fusion of hydrogen into helium in its nuclear furnace causes the Sun’s nuclear furnace to burn progressively more efficiently. Figure 1 shows the consequent brightening of the Sun throughout its early history. 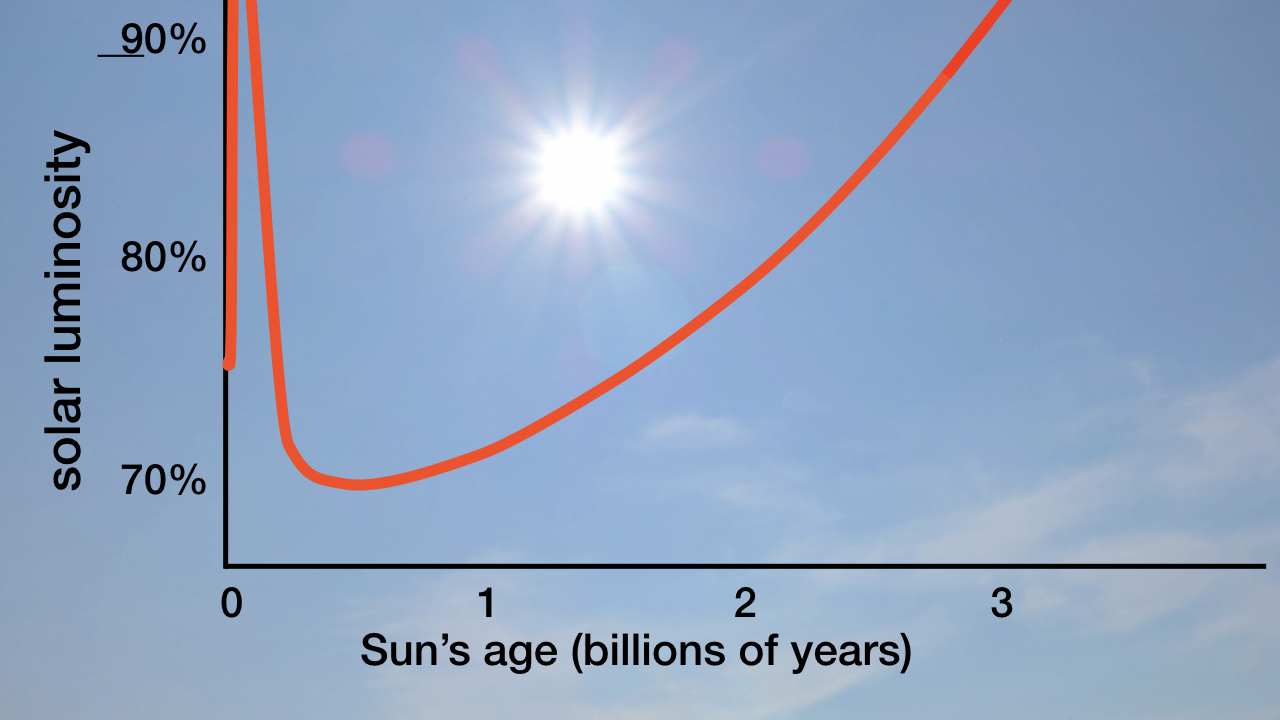 Given how faint the Sun was previous to 4 billion years ago, all of Earth’s surface water, independent of collision events, would have been frozen. Figure 2 shows the history of collision events throughout Earth’s history that astronomers had calculated from their solar system formation models. 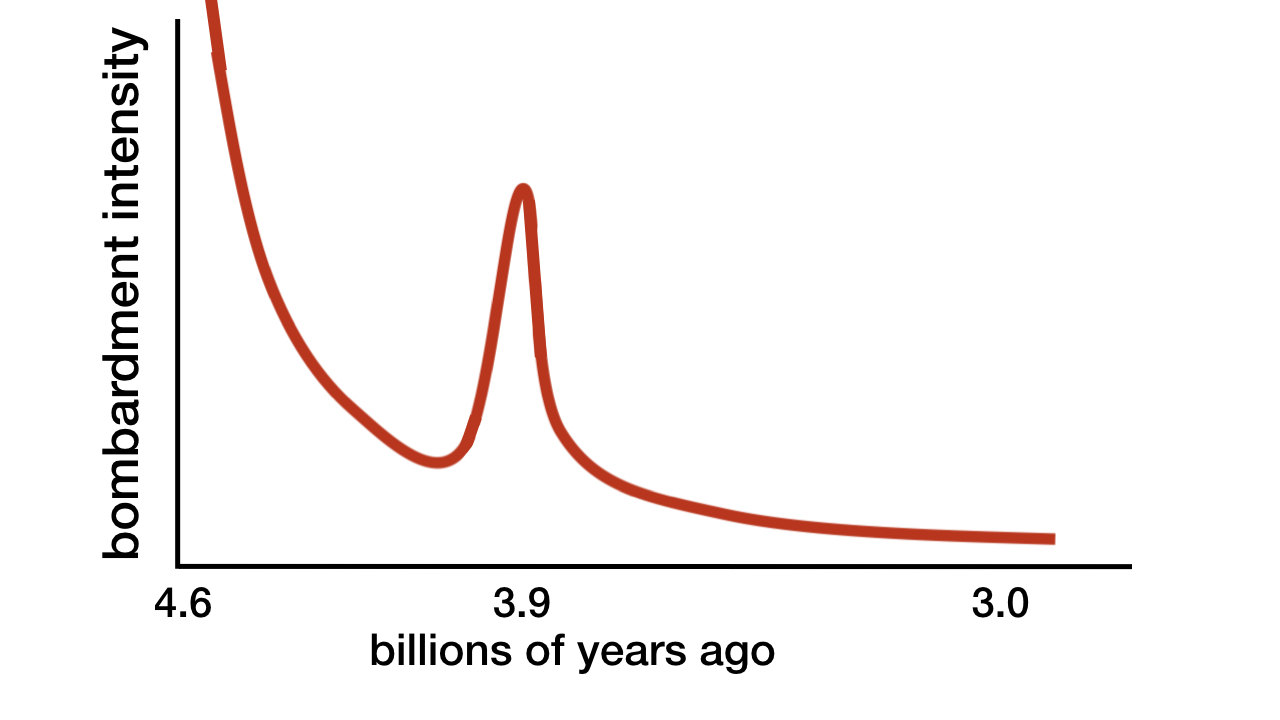 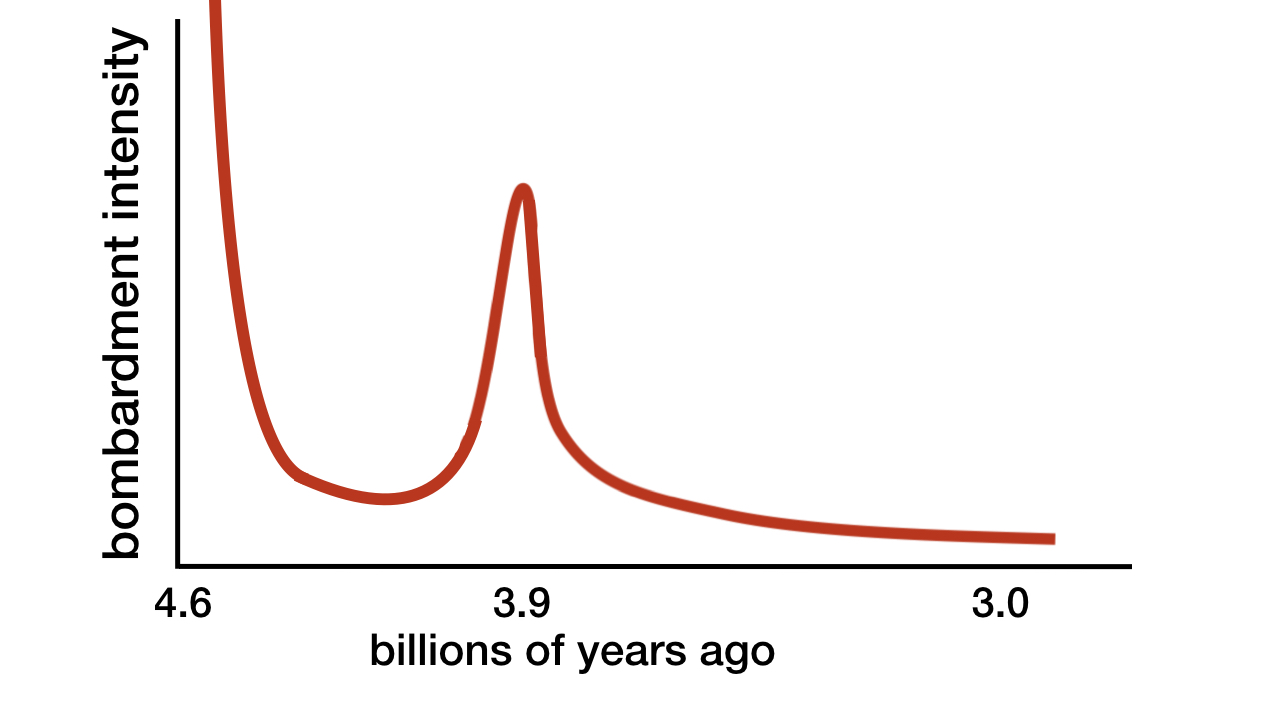 What the New Evidence Means
An obvious implication of the new model for the formation of the Moon’s fossil bulge is that Earth scientists will need to rename the Hadean era. Earth from 4.4–4.0 billion years ago was not hellishly hot. It was freezing cold. The Hadean era really was the Cryo era. (The name Cryogenian already is taken for the Sturtian and Marinoan glaciations that occurred 720–635 million years ago.)

A much more significant implication of the new lunar fossil bulge model concerns the origin of life. Neither the frozen state of Earth during the Cryo era nor the brief local incidents of heat from collision events are conducive to either the origin or survival of life. Therefore, the evidence for the rapid appearance of life 3.825 billion years ago immediately after the late heavy bombardment (see figures 2 and 3) argues that life’s origin was a supernatural event.4 In addition to what I have already presented in chapter 8 of Improbable Planet,5 the new lunar fossil bulge model provides yet more evidence that God, not unguided natural processes, was responsible for life’s origin.

How Would the Discovery of Extraterrestrial Life Affect Biblical Creation Models?

With the recent discovery of so many “habitable” planets, I have been bombarded with questions on my Twitter page about how the discovery of...
Theology

Good things can come from bad circumstances. This idea is beautifully illustrated by the research efforts of a team of Australian scientists. Climate change...
Origin of Life & Astrobiology

Who, what, where, when, why, and how? These are the questions that good journalists ask. They are also the same inquiries that origin-of-life researchers...
Origin of Life & Astrobiology