One of the most outstanding and blessed features of Earth is that it has an ice age cycle where, for the past 9,000 years of that cycle, the planet has experienced extreme climate stability. New analysis of historical temperature measurements garnered from 73 different locations on Earth now reveals that the climate of the past 9,000 years has been far more stable than previously thought. That is, we humans are much more blessed than we previously recognized.

As I have explained in chapter 15 of my book, Improbable Planet, an ice age cycle where Earth’s surface ice coverage oscillates between 10 and 20–23 percent is an essential requirement for billions of humans to live on Earth at one time.1 It is also critical that the period of oscillation be roughly 100,000 years.

Scientists have uncovered a long list of different phenomena that each play a role in sustaining the ice age cycle. I have described some of these phenomena in Improbable Planet2 and many more in a series of three blogs that were posted on October 1,3 October 8,4 and October 155, respectively.

Past Climate Stability Determinations
These phenomena all impact the ice age cycle in different ways. Hence, the ice age cycle is characterized by extreme climate instability. Figure 1 shows the variation in the global mean temperature that persisted previous to 9,000 years ago as determined by oxygen-18 isotope abundances (excellent proxies for temperature) in two high-altitude Greenland ice cores. The indicated global mean temperature had fluctuated by as much as 10°C (18°F) on timescales of a few centuries or less. 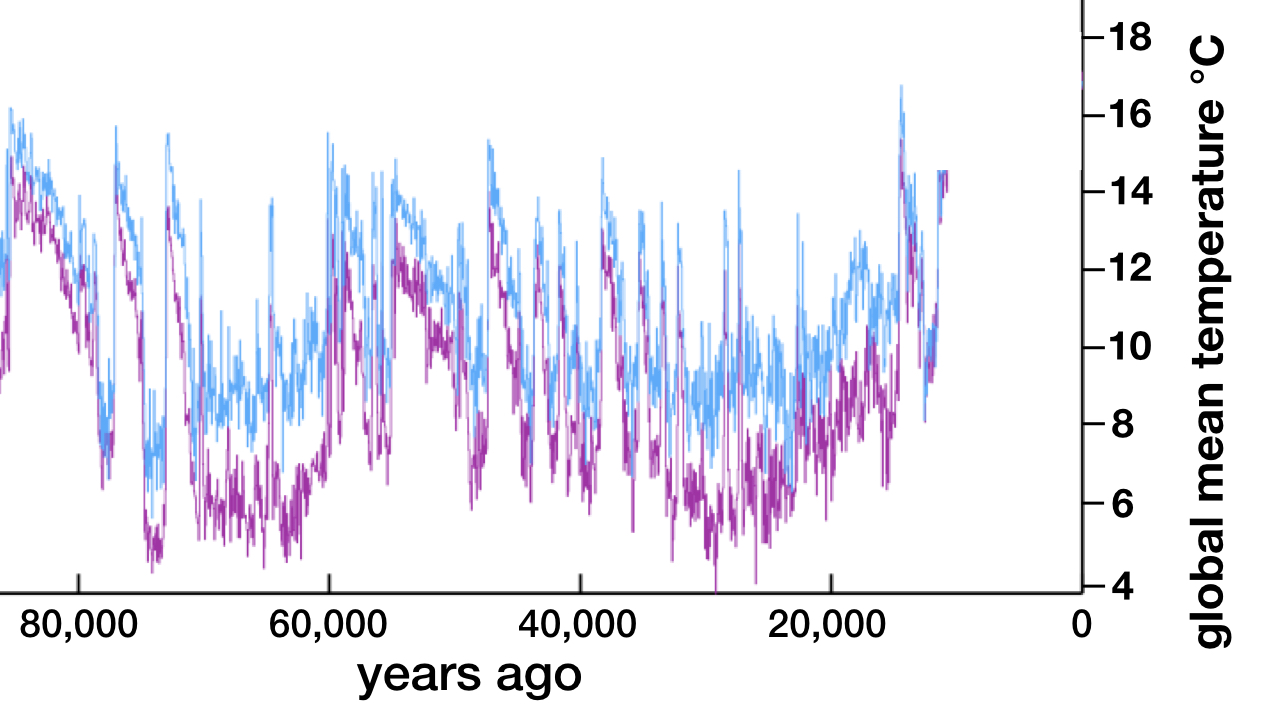 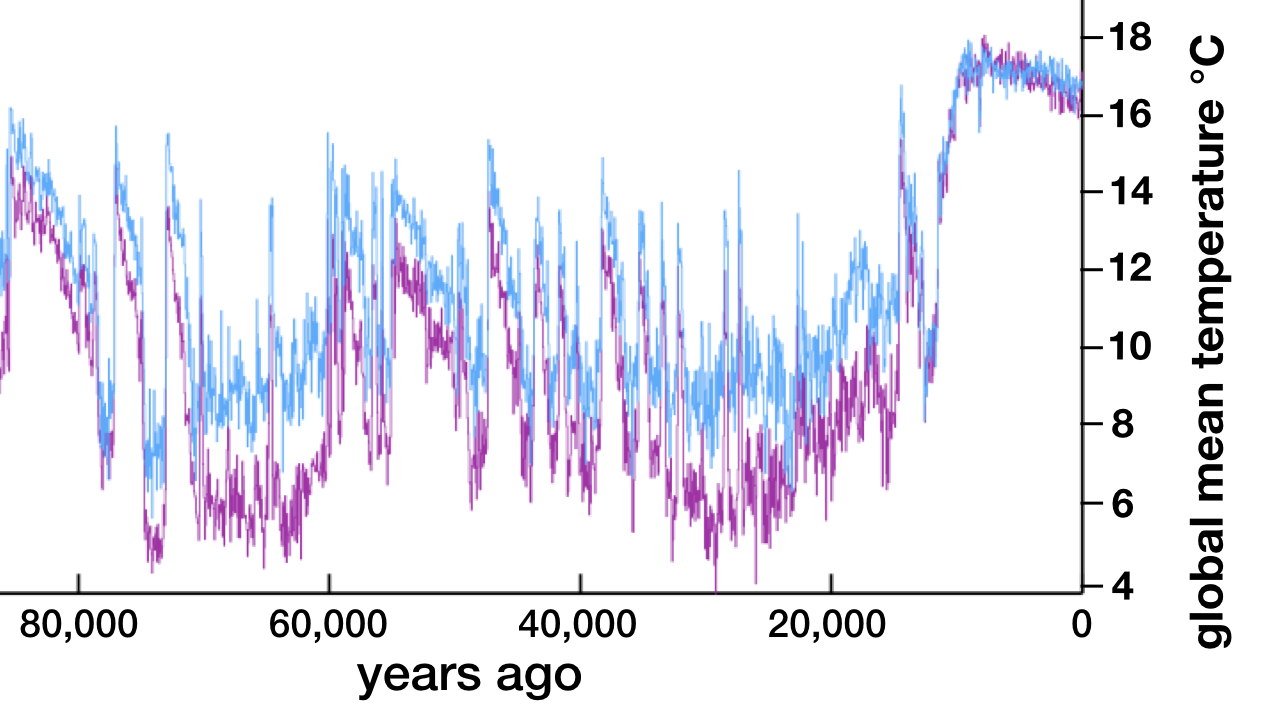 Due to extreme climate instability, humans struggled to launch civilization previous to 10,000 years ago and they were limited to small-scale mixed agriculture and bakery production (see my July 26, 2016 blog6 and my August 27, 2018 blog7). It was the advent of extreme climate stability that was primarily responsible for the technical and cultural big bang known as the Neolithic Revolution.

Recent Climate Stability Determinations
A team of four Earth scientists at Oregon State University and Harvard University led by Shaun Marcott noted that the past climate record as determined by measurements from deep Greenland ice cores did not adequately account for the effect of altitude on climate.8 They reconstructed regional and global temperatures for the past 11,300 years from 73 globally distributed records. These 73 records were based on a variety of paleotemperature proxies, not just oxygen-18 isotope measures. Marcott and his associates accounted for chronological and proxy calibration uncertainties with Monte Carlo computational algorithms based on 1,000 realizations.

The team’s reconstruction revealed that the global mean climate was more stable than what the high-altitude Greenland ice core measurements indicated. Like these Greenland ice cores, though, they showed a gradual, long-term cooling trend from a little more than 5,000 years ago until 1950 AD.

Statistician Grant Foster9 and petrophysicist Andy May10 argued that not all of the Marcott team’s 73 proxies can be counted on to deliver reliable measurements of past global temperatures. May commented that “some are affected by local conditions that have no regional or global significance; others cover short time spans that do not cover the two most important climatic features of the Holocene, the Little Ice Age and the Holocene Climatic Optimum [Medieval Warm Period].”11 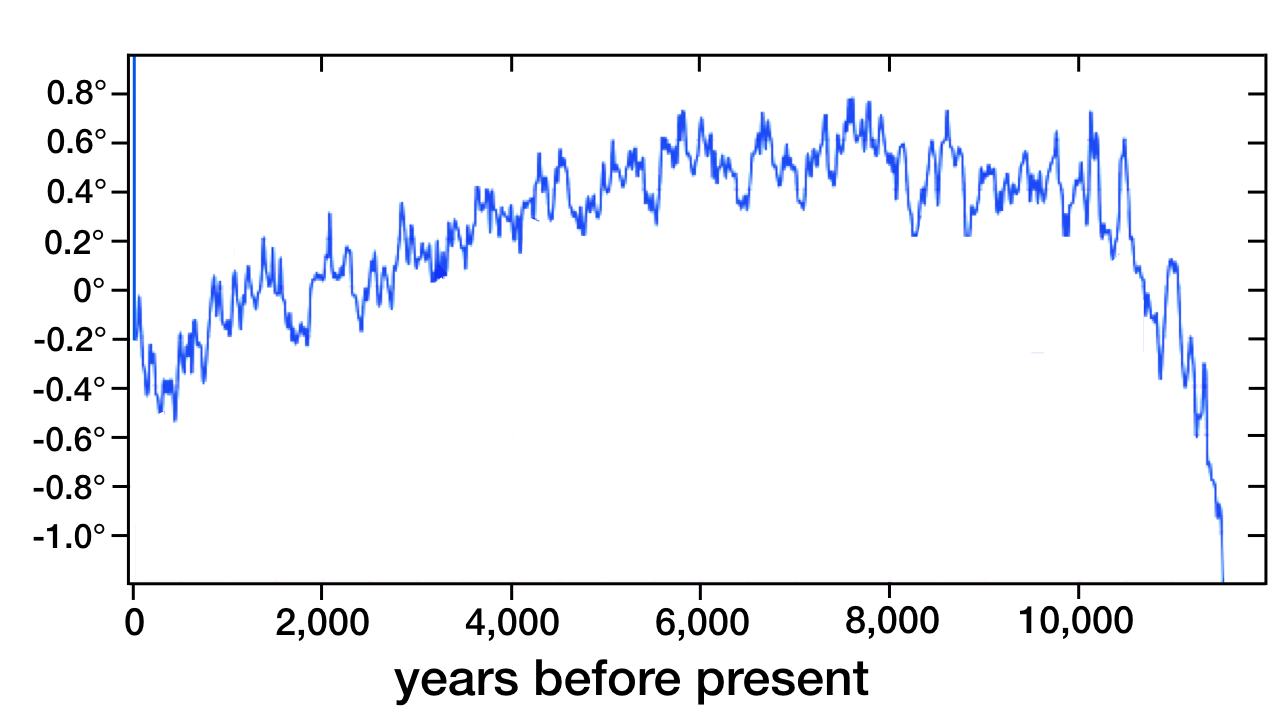 Figure 3: Reconstruction of the global mean temperature over the past 11,300 years. Temperature measurements are in degrees C. Data credit: Marcott et al. and Andy May; Diagram credit: Hugh Ross

Figure 3 shows that the global mean temperature did not vary by more than ±0.65°C over the past 9,000 years. That is, the global climate over the past 9,000 years was twice as stable as what the high-altitude Greenland ice cores (figure 2) had indicated. May’s reconstruction affirmed a gradual, long-term cooling trend from 8,000 to 70 years ago but only to half the degree that was indicated in the Greenland ice cores.

A cause for some concern is that all the cooling that has occurred from 8,000 to 70 years ago has been entirely reversed in just the past 70 years. However, a reason to express yet more gratefulness to our Creator is that the past 9,000 years of climate stability is much more stable than what scientists had previously thought. The gift of extreme climate stability, thus, is much more valuable than what scientists had previously measured, especially when that value is measured against the extreme climate instability that characterizes the ice age cycle.

We indeed have much to be thankful for. As for the past 70 years of rapid temperature rise, we need to acknowledge that most of that rise is due to our mismanagement of Earth’s resources. That mismanagement should motivate us to go to our Creator for the wisdom, humility, and grace we lack to fulfill the mandate God gave us to manage Earth’s resources for our benefit and for the benefit of all Earth’s life.

In next week’s blog, I will describe how a recently discovered collision event helps explain why we have enjoyed such an extremely stable climate for the past 9,000 years.

A few days ago, I wrote about a recent discovery that highlights the challenge that specific features of the Cambrian explosion pose for the...
Design

The Heavens Resound with a Message for Mankind

Three astronomers have discovered yet another of the many delicate balances operating in our solar system, balances that protect life on this planet.
Design

A team of ecologists and biologists has developed additional supporting field evidence for the Reasons To Believe model for speciation and extinction outlined in...
Design