Nearly every high school student has been taught the results of the Miller-Urey experiment. Stanley Miller discharged electric sparks in a flask (see figure below) that he filled with the gases that he thought comprised the atmosphere of early Earth. The resultant tarry residue he scraped off the bottom of the flask in just one of 200 experimental runs contained a few of the 20 amino acids that form the building blocks for proteins. 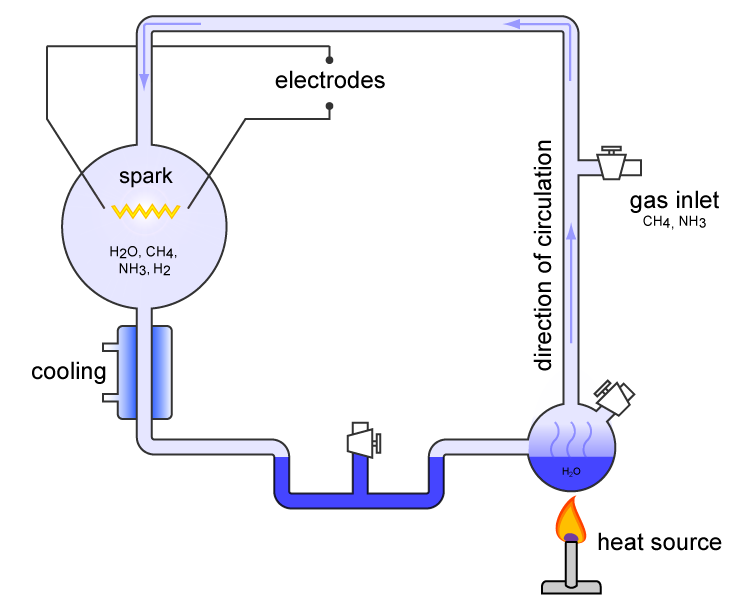 Scientists around the world hailed Miller’s achievement as a major step forward in solving the problem of how natural processes can bring about the origin of Earth’s first life. Several times Stanley Miller was even nominated for—but did not win—the Nobel Prize for his discovery.

Today we know that Miller’s flask experiment is irrelevant to the origin of life. The gases he put in the flask are nothing like the gases that comprised Earth’s atmosphere at the time of life’s origin. We also know that even the tiniest amount of oxygen in Earth’s atmosphere or oceans stymies the chemical pathways that are crucial for any origin-of-life scenario.

As my colleague Fazale Rana and I reported in Facts for Faith, Serbian physicist Ivan Draganić demonstrated that at least some oxygen had to be present in early Earth’s oceans and atmosphere.1 Draganić showed that uranium and thorium were so sufficiently abundant in Earth’s crust that their radiometric decay split water molecules into hydrogen and oxygen. The resultant oxygen was more than enough to halt any natural origin-of-life synthesis.

Since the publication of the Serbian physicist’s paper,2 scientists have produced additional confirmations that early Earth’s environment was much too oxygen-rich to permit any conceivable natural origin-of-life scenario. In a review paper on the state of Earth’s mantle, geophysicists Daniel Frost and Catherine McCammon explained how the pressure (fugacity) of oxygen in the mantle has important implications for what kind of gases volcanoes release into the atmosphere both presently and long ago in Earth’s history.3

The geochemists then reported on their determination of the oxidation state of Hadean magmatic melts (crustal material that formed between 4.4 and 3.8 billion years ago) based on the incorporation of cerium into ancient zircon crystals. They found that the melts had “oxygen fugacities that are consistent with an oxidation state defined by the fayalite-magnetite-quartz buffer, similar to present-day conditions.”5 They concluded that “outgassing of Earth’s interior later than ~200Myr [later than 4.350 billion years ago] into the history of Solar System formation would not have resulted in a reducing atmosphere.”6 In other words, Earth has possessed an oxidizing atmosphere throughout the past 4.350 billion years—525 million years longer than life has existed on Earth.

In a paper published in Earth and Planetary Science Letters,7 geophysicist Dante Canil concluded that “the data for Archean mantle melts and residues make clear that models cannot look to reduced mantle-driven volcanic gases containing H2 and CO to engender early life synthesis.”8 In the Forum Reply of the journal Geology, published just a few weeks ago, geologists Brian Hynek and Stephen Mojzsis asserted that “the resultant atmosphere from outgassing is correspondingly expected to have been at least mildly oxidizing from the early days [since 4.3 billion years ago].”9

All these findings leave no reasonable doubt that Earth’s environment at the time of life’s origin possessed far too much oxygen to permit any naturalistic scenario for the origin of life. The oxygen problem is just one of many reasons why a naturalistic explanation for life’s origin is not possible. The elimination of naturalistic explanations leaves just one option: A supernatural, super-intelligent, super-powerful Being assembled the first life on Earth.

At first look, this scene might not seem relevant to a discussion on the origin of life. But when you’re trying to explain mutually...
Chemistry

Members of the Cassini-Huygens mission to Saturn’s moons have published the first of their findings from the second close flyby by the planetary probe...
Chemistry

Water on Mars: What Does It Mean?

On June 22, NASA astronomers held a press conference to announce their discovery of “recently” cut gullies, indicators of flowing water, on the Martian...
Chemistry