Image: The Manicouagan Crater is the largest easily visible impact crater on Earth and the sixth largest confirmed impact crater. It is 100 kilometers in diameter and is roughly 215 million years old.

Nothing seems to strengthen our relationships and our beliefs as much as affirmations and confirmations. When I see God supernaturally working in my life or in the life of another human being, that work persuades me all the more that God exists and cares very deeply and lovingly for every human being. Likewise, the study of God’s second book of revelation, the book of nature, does much to strengthen my faith in God.

A biblical promise is that the more we learn about the realm of nature the more evidence we will discover for the handiwork of God. See for example, Job 9:4–10; Job 12:7–10; Psalm 19:1–4, 50:1–6, 148. It was that biblical principle that inspired the title of my first book, The Fingerprint of God. What I find especially encouraging in my book-writing ventures is when new scientific discoveries strengthen the apologetics points that I made.

My latest book, Improbable Planet, was released just three months ago. In that book I made several dozen new apologetics arguments. What I find most encouraging is that already some of the new apologetics I wrote about has been affirmed by new research findings.

Mass Extinction Periodicity Explained
One of the more encouraging of these new scientific discoveries came from two physicists, Eric Kramer and Michael Rowan, at Harvard University. Last month, they posted a preprint of their research paper1 in which they explain the apparent periodicity in the mass extinction events seen in the fossil record.

The Oort cloud is the largest and most distant of the comet-asteroid belts associated with the solar system. When this cloud gets gravitationally perturbed, the probability of a large comet or asteroid impacting Earth rises dramatically. A team of planetary astronomers led by Eugene Shoemaker in 1988 determined that 80 percent of the craters on Earth possessing diameters greater than 100 kilometers and 50 percent of the craters with diameters greater than 50 kilometers were caused by long-period comets/asteroids.4 The Oort cloud is the source of virtually all long-period comets/asteroids.

In their paper, Kramer and Rowan address the question of whether or not the solar system passing through the plane of the disk of the Milky Way Galaxy disturbs the Oort cloud to a sufficient degree to explain the major mass extinction events in Earth’s history. They first show that a thin disk of dark matter in the Milky Way Galaxy is needed to provide an adequate disturbance of the Oort cloud.

Second, Kramer and Rowan refer to the Planck satellite maps of the cosmic microwave background radiation and the galactic background radiation. From the data comprising these maps they establish that the Milky Way Galaxy indeed possesses a thin disk of ordinary dark matter comprised of hydrogen gas.5 However, Kramer and Rowan show in their paper that this disk by itself is not sufficient. What is needed is an additional disk of exotic dark matter (matter made up of particles that interact very weakly or not at all with photons). Next, they demonstrate that the existence of such an exotic dark matter disk is consistent with the observed kinematics of stars and molecular clouds in the Sun’s vicinity.

For this exotic matter disk to be stable over at least the past half billion years of the solar system’s history, it must be at least 100 light-years thick.6 Could such a thick disk of exotic dark matter perturb the Oort cloud enough to explain the mass extinction events? In their paper Kramer and Rowan show that the answer is yes. Another astrophysicist, Nir Shaviv, demonstrated that the oscillatory movement of the solar system through such a disk also explains the 32-million-year climate that geochemists and paleontologists see occurring throughout the Phanerozoic eon (the time duration between the Cambrian explosion 543 million years ago and the present).7

Kramer and Rowan answer another big question about the mass extinction events. These events look roughly (but far from perfectly) periodic. Kramer and Rowan point out that another major perturber of the Oort cloud would be the solar system crossing a galactic spiral arm. When perturbations of the Oort cloud by both the z-axis cycle in the Sun’s orbit about the galactic center and the Sun’s crossings of spiral arms are taken into account, Kramer and Rowan show that the timing of these perturbations matches the timing of major impact events on Earth. In particular, the timing of these perturbations correctly predicts the date of the giant comet/asteroid impact event that wiped out the dinosaurs, and with them about 75 percent of all species on Earth 66 million years ago.8

As I describe in much detail in Improbable Planet, mass extinction events of a prescribed periodicity and intensity that are quickly followed by mass speciation events play a crucial role in resolving the faint Sun paradox.9 The faint Sun paradox is the enigma of our Sun brightening by 18–23 percent throughout the history of life on Earth while life of any sort can only tolerate at most about a 2 percent change in the Sun’s brightness. The figure below shows the luminosity history of the Sun. 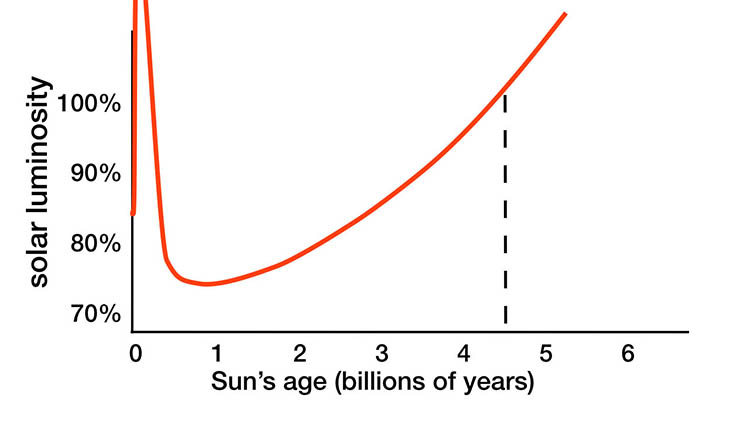 Image: Sun’s brightness or luminosity throughout its history

The only way to sustain life for billions of years on Earth, with the abundance and diversity of life so as to provide for humanity the wealth of biodeposits needed to launch and sustain global civilization, is to incrementally draw down the quantity of greenhouse gases in Earth’s atmosphere. In this manner, as the Sun brightens, the greenhouse effect of Earth’s atmosphere weakens. If the greenhouse gases are drawn down by just the right degrees at just the right times, the temperatures at Earth’s surface can be kept ideal for life in spite of the Sun progressively getting brighter.

Thanks to the unique and exquisitely designed features of the Sun’s origin and its subsequent orbit about the center of our galaxy10 and the unique and exquisitely designed features of the Sun’s five asteroid/comet belts,11 Earth receives giant impactors of the right size, velocity, and frequency to produce the required mass extinction events. It is thanks to a Creator who knows and understands the future physics of the Sun and Earth that the mass speciation events that follow the mass extinction events are comprised of the just-right life-forms in the just-right abundance levels to best compensate for the slightly brighter Sun. As Psalm 104:29–30 proclaims, it is the fate of all life to die off, but God recreates and renews the face of the Earth. Apparently, he does so for the specific benefit of human beings so that those humans who choose to follow him can quickly take the good news of salvation through Christ to all the people groups of the world.

Mathematics and the Physical Universe

More than once, scientists and philosophers have noted how mathematics can describe, with remarkable precision, the laws that govern our universe. An example of...
Evolution

“Welcome Back My Friends to the Show that Never Ends,” Part 2

Is evolution a fact? Oxford biologist Richard Dawkins and many other scientists think so. In his latest book, The Greatest Show on Earth, Dawkins...
Evolution

Evolution as Mythology, Part 2 (of 5): Evolution is not a Scientific Theory