The hike up to the fossil beds was only 1.8 miles but very steep. To appreciate how steep, in the featured image above, we started the hike from the Kicking Horse River and the town of Field (center right). Rumor has it that Fazale and a few others wanted to curse the law of gravity but were so out of breath that they couldn’t utter a word.

What is not a rumor, but actually true, is that many of my friends and relatives have cursed me for some of the steep mountain climbs I have taken them on. I tried explaining to them, to little avail, that as punishing as Earth’s gravity is when going up a steep mountain, if Earth’s gravity were any weaker, mountain climbing would be more challenging and certainly much more dangerous. This conclusion pertains not just to mountain climbing but also to virtually any kind of terrestrial bipedal activity.

Part of God’s plan in creating and crafting Earth is that our planet would be able to sustain large-bodied, tall bipedal mammals who would be able to efficiently and safely walk, run, and jump for several hours per day throughout decades of a life span. Such a goal requires a fine-tuned surface gravity for the planet. One way to appreciate this fine-tuning is to go to one of NASA’s space camps.

When my son David was 6 years old, I took him to a NASA space camp. For us, the highlight was a visit to the alternate gravity lab where our body weight was offset by counterweights. We had the experience of walking around and picking up and using tools under lunar and Martian gravity conditions.

Keeping our balance and preventing falls was a real challenge. Every task we performed took much more effort and time than under Earth gravity conditions. What became clear was that the closer we got to Earth’s surface gravity, the faster, more reliably, and more effortlessly we could perform tasks. What became especially evident was how much wider a range of tasks and physical operations we could perform.

We also understood why NASA went to the expense of building and sending lunar transport vehicles (see figure below) to the moon for ferrying Apollo astronauts over the lunar surface. It simply wasn’t feasible or safe for the astronauts to walk more than a few yards at a time on the moon. 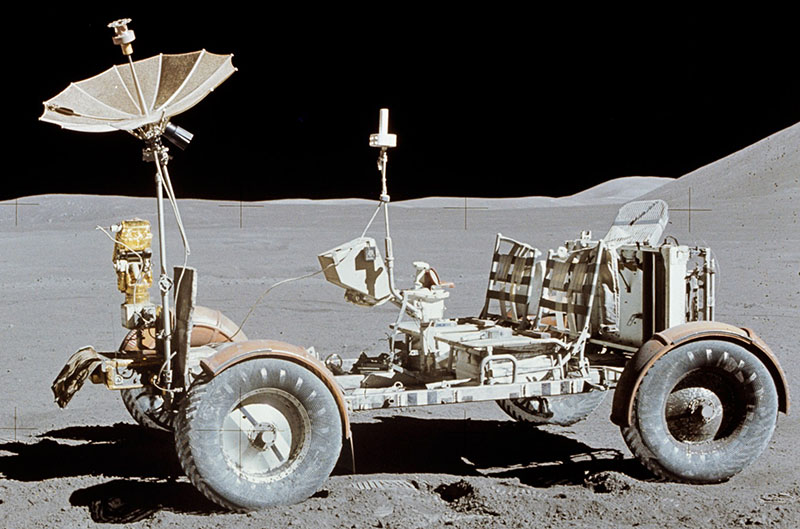 Imagine all of us who were part of the trek to the Mount Stephen fossil beds hiking it with backpacks equal to half of our body weights. Imagine, too, if we never got to take the backpacks off day or night for weeks on end.

In such a scenario, less than 10 percent of us would have made it to the fossil beds. None of us would have been able to run or jump. Even normally simple tasks like tying one’s shoelaces, getting up from the toilet, or collecting swept-up dust in a dustpan would be much more enervating and time consuming. In fact, only people in tip-top physical condition would be able to perform such tasks, and those people in tip-top physical condition would suffer more and possibly incur more serious physical injuries. Furthermore, their bodies would wear out faster, resulting in much shorter life spans.

The miracle of bipedalism under any surface gravity condition can be demonstrated by trying to stand a pencil on its eraser end. For the human body just to be able to stand in one place, it takes the continuous operation of 300 muscles that are monitored and controlled by the brain with the help of balance-sensing instruments inside our inner ears.

The human bipedal system works well because of Earth’s surface gravity having the optimal value. A surface gravity more than a few percent different from Earth’s would either force us to become three-legged, four-legged, or more-legged; force us to live in an aquatic environment; or force us to accept much more limited mobility and dexterity, a much higher rate of injuries, and much shorter life spans.

So, the next time you climb a mountain, a hill, or a few flights of stairs with a backpack or a piece of luggage, I hope you will remember to thank God for designing our planet with the optimal surface gravity. I hope you will thank him, too, that you get to take off your backpack and put down your luggage.

On Monday I discussed a recent report on the human pupil and how the research shows that so-called “bad” designs are often, in fact,...
Design