In my previous blog article, I explained and described how science today reveals exponentially more about God, his attributes, and his plans for humanity than it did just a century ago. This exponential increase in revelation from the book of nature provides the fuel for the ministry of Reasons to Believe. Because of this increase, we are seeing unprecedented numbers of skeptics becoming faithful followers of Christ.

Still, many more people are turning away from faith, raising a paradox. Why, if there is so much more revelation of God coming from the scientific disciplines, do we see in several parts of the world such a rise in the percentage of the population that identifies themselves as atheists, agnostics, or deists?

In this blog article I will explain and describe how, in a different context, science reveals much less about God than it did a century ago. I will explain why, consequently, in some parts of the world atheists and agnostics today make up a still small but larger percentage of the population than in the past. Below, I will address three different arenas where nature reveals less about God.

Less Revelation from the Heavens

In a recent issue of Science Advances, an international team of 10 light-pollution scientists reported that more than 80 percent of the world’s population and more than 99 percent of the US and European populations live under artificial light–polluted skies.1 Figure 1 shows the current status of light pollution for the world.

Even in the least light-polluted parts of the world, artificial-light pollution is noticeable. The featured image for this article shows the Milky Way from the European Southern Observatory in a northern mountain range of Chile. As spectacular as this view of Milky Way is, it is diminished by artificial lighting. 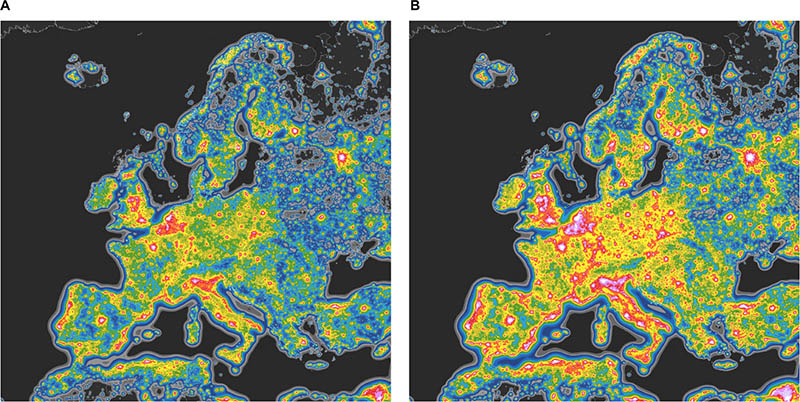 Personally, I have found the large cities of Asia to be the worst for light pollution. Not only was I unable to see the Milky Way on a clear moonless night in Seoul, Shanghai, or Hong Kong, but I was unable to see a single star in the night sky.

The heavens proclaim his [God’s] righteousness, and all peoples see his glory. (NIV)

This Bible text presumes that people can see the heavens. If they cannot see the Milky Way or any stars at all, how can they possibly perceive, from viewing the heavens, God’s righteousness and glory?

On a positive note, I have witnessed, several times, the impact that a first-time sighting of the Milky Way can have on human beings. Without exception, people are awestruck. I have heard non-Christians in such circumstances tell me that they were having a spiritual experience. In such settings it is so much easier to engage people in meaningful spiritual conversations than it is in light-polluted cities.

Less Revelation from Birds and Mammals

Job 12:7 encourages us to let animals reveal truth to us:

“Animals” in the verse above refers to land mammals. Much of the rest of the book of Job explains how our contact with wild birds and mammals teaches us important spiritual lessons—lessons about ourselves, about God, and about how we can enter into a relationship with God.

A few of those lessons include the following:4

On another positive note, I have experienced the impact of taking highly educated people out of the city and into a pristine natural environment where I encourage them to take time to be still and calmly observe wildlife. Seeing how motivated certain wild birds and mammals are to hang around us can be spiritually impactful. In such settings I have seen scientists, who in their university offices were very resistant to discussing Christianity, suddenly become eager to discuss spiritual matters.

As I explained in my most recent book, Improbable Planet, we are living during a very narrow window of time in which the surface of Earth possesses more stunning, spectacular natural beauty than it ever has before.5 Spending time in such beautiful natural settings can be spiritually uplifting. It appeals to our aesthetic senses. It compels contemplation about why such beauty exists and what it means for our purpose in life. An example of how spiritually impactful beautiful nature scenes can be is what I saw happen to my colleagues in the astronomy department when I was a research fellow at the California Institute of Technology. In the hallways of the Robinson Laboratory of Astronomy and Astrophysics, all but a few of my fellow research astronomers were resistant to any kind of meaningful spiritual dialogue. However, when I would take some of them into the high alpine meadows of the Sierra Nevada mountain range not far from the Owens Valley Radio Observatory, everything changed.

I would ask them for their impression of the scene before us. They would say it was beautiful beyond description. I would then ask them why the scene was so beautiful. That question consistently led to an hour or several hours of discussion about God, Christianity, the universe and Earth’s design and purpose, and God’s purpose in creating human beings.

On one occasion in those high alpine meadows, I didn’t need to say a word. The atheist astronomer I was hiking with stopped and said to me, “Something weird is happening to me. I think I am having a spiritual experience.”

Explaining the Rise of Atheism
Throughout the latter part of the twentieth century and on into the twenty-first century, there has been a steady rise in the percentage of the world’s population who identify themselves as either atheists, agnostics, or deists. This steady rise is correlated with the increasing percentage of the world’s population who live in cities with inhabitants exceeding 1 million.

People living in cities of population sizes exceeding 1 million rarely, if ever, see the Milky Way, much less a hundred stars in the nighttime sky, wild birds and mammals in their natural environments, or beautiful natural scenic wonders. Much of the book of nature is cut off from them, especially those parts of the book of nature that most clearly reveal God, his attributes, and his plans for his creation and humanity. No wonder so many city dwellers struggle to find God. They may possess PhDs in the scientific disciplines from the top universities in the world, but because they are cut off from nature, in some respects they are more ignorant about science than people who lived thousands of years ago.

Many of you have asked me why I post so many of my nature photos on my Facebook page. It is because I not only want to show people God’s increasing revelation through emerging scientific discoveries in the scientific literature, but also want to show people the revelation from wild, unspoiled nature. My prayer is that the few photos I post will help reverse the trend of people living in the twenty-first century seeing less of God’s natural creation.

If the universe were not measurable, scientific study would be impossible. Astronomy, biology, chemistry, cosmology, geology, physics, and the other disciplines of science would...
Astronomy

What is humanity’s final state? An impersonal existence after being absorbed into an impersonal deity? Or an intimate, personal relationship with a super-personal God....
Worldviews

Addressing Doubts about the Faith

Several years ago I received an email from a pastor who was going through some difficult times. He had battled a life-threatening illness, experienced...
Theology