One of those examples I will describe in this blog post. The second I will address in my next blog post.

The first example was a NASA scientist putting a price tag on the asteroid 16 Psyche. 16 Psyche is a metallic asteroid measuring 214 kilometers in diameter at its widest dimension and 181 kilometers in diameter at its narrowest dimension. Based on its radar albedo, astronomers know that iron, nickel, and cobalt comprise 95–99% of its composition. The other 1–5% are precious metals and pyroxene. Astronomer Lindy Elkins-Tanton, who heads up the NASA mission to send a spacecraft to 16 Psyche in 2023, calculated that 16 Psyche’s ingredients are worth at least $10,000 quadrillion.1 That sum makes the global debt of $60 trillion pale in comparison.

NASA has made it abundantly clear that it has no plans to bring 16 Psyche into an Earth or lunar orbit and that it presently lacks the technology to mine 16 Psyche in its present location and bring the mined resources back to Earth. 16 Psyche is simply too far away and too big.

While it is presently beyond the technology of the space agencies of the world to capture an asteroid the size of 16 Psyche and transport it to Earth where it could be parked in an Earth orbit and mined for the benefit of humanity, it is well within their means to capture and transport to Earth a much smaller metallic asteroid, one perhaps only a kilometer in diameter. Such an asteroid would still be worth at least $1.25 trillion and maybe much more. Thus, while it may cost a space agency a few billion dollars to capture and bring a small metallic asteroid back to Earth where it could be parked in an orbit about Earth. The potential return on investment would make such a project the most lucrative investment opportunity in the history of the human race.

However, the most lucrative investment may not be the safest investment. Small asteroids are unlikely to have spherical shapes or homogeneous composition. Such departures from sphericity and homogeneity will make it challenging, to say the least, for physicists to calculate a reliably safe orbit about Earth for a small asteroid. Of course, the orbit would need to be recalculated and reestablished every time a chunk of the asteroid is mined. An orbital miscalculation, mining blunder, or problem establishing a new safe orbit could result in the fulfillment of Revelation 8:10–11, which reads:

“The third angel sounded his trumpet, and a great star, blazing like a torch, fell from the sky on a third of the rivers and on the springs of water—the name of the star is Wormwood. A third of the waters turned bitter, and many people died from the waters that had become bitter.”

The Greek word for star in this passage is aster. Its definitions include stars, planets, comets, and meteors (shooting stars). The “star” in this passage that falls upon Earth does not wipe out humanity, but apparently at least some of its composition is toxic. The star, therefore, must be a relatively small object, something on the order of 300 meters (1,000 feet) in diameter upon impact. Its described toxicity closely matches what one would expect to result from a metallic asteroid.

It is certainly possible that Revelation 8:10–11 will be fulfilled by a purely natural event. After all, the 1,200-meter (3,900-foot) diameter Barringer Crater (see image below) resulted from a 50-meter (160-foot) diameter metallic meteorite striking the Arizona desert about 50,000 years ago. If the impact event described in Revelation 8:10–11 is purely natural, however, it likely will not happen anytime in the foreseeable future. NASA knows of no asteroid of sufficient size that has even a remote possibility of striking Earth within the next two centuries. 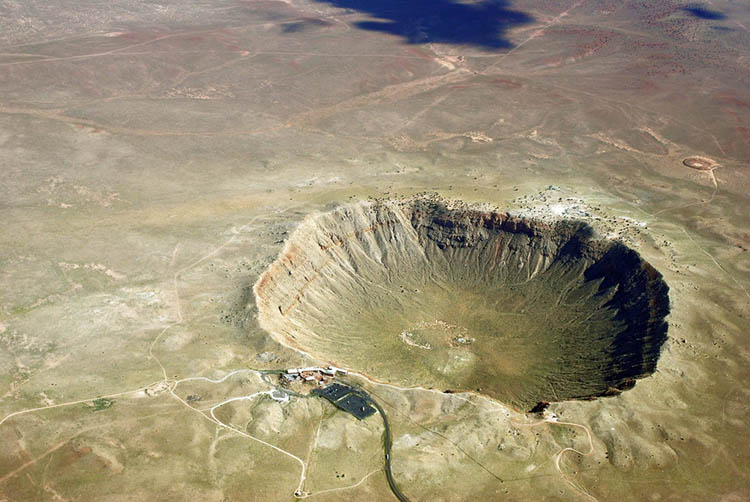 I personally favor the fulfillment of Revelation 8:10–11 in less than 200 years. I am optimistic that God’s people, in much less than 200y years, will be able to fulfill the last commandment Jesus assigned to his disciples before he ascended from Earth:

“Therefore go and make disciples of all nations, baptizing them in the name of the Father and of the Son and of the Holy Spirit, and teaching them to obey everything I have commanded you. And surely I am with you always, to the very end of the age.”
–Matthew 28:19–20

Since the fulfillment of this commandment occurs after the events described in Revelation 8, it seems that a scenario similar to what I have presented here may occur. Or to word my conclusion differently, given the state of current technology and the demand for high quality raw resources to sustain that technology, it seems possible that the fulfillment of Revelation 8:10–11 would occur in decades rather than centuries or millennia.

Why “Evening and Morning” for the Genesis Creation Days?

Question of the week: Why does Genesis 1 use the words “evening” and “morning” to indicate the ending and starting time of each creation...
Bible

A Hypernatural Miracle: Elijah and the Fire from Heaven

Imagine standing on Mount Carmel in Israel, watching the contest between the prophet Elijah and the prophets of Baal (1 Kings 18). For nearly...
Bible

The Bible affirms that God’s handiwork displays His character. The universe proves God’s existence and identity as Creator, His character attributes such as love,...
Bible