Mosquitoes are the deadliest creature on Earth, killing over 2 million people annually and sickening hundreds of millions more.1 So why on earth would we celebrate World Mosquito Day? And why would a good God create bloodsucking, disease-ridden insects responsible for such extensive suffering?

World Mosquito Day, August 20, is a day that has been marked every year since 1897, when British doctor Sir Ronald Ross first pronounced it in light of his work and discoveries that female Anopheles mosquitoes carried and transmitted malaria parasites. Since then, mosquitoes have been identified as vectors of numerous other pathogens associated with familiar and obscure human diseases. In addition to malaria parasites of the genus Plasmodium,2 mosquitoes carry over a dozen viruses, including yellow fever; dengue; West Nile; Rift Valley fever; Jamestown Canyon; chikungunya; Japanese, St. Louis, La Crosse, and California encephalitis viruses; Venezuelan, Western, and Eastern equine encephalitis viruses; and most recently, Zika virus. The parasitic filarial worms (Wuchereria bancrofti, Brugia malayi, and Brugia timori) associated with elephantiasis are also transmitted to humans by mosquitoes.3

The celebration of World Mosquito Day is not a celebration of mosquitoes but really just an opportunity to heighten awareness and promote education about diseases spread by mosquitoes. Programs promote action items that individuals can take to help prevent mosquito breeding and biting, and transmission of the associated diseases. These include things like covering or removing standing water where mosquitoes can breed, staying indoors, wearing long sleeves and pants, using mosquito repellent, using air-conditioning rather than open windows for cooling, and using mosquito nets when mosquitoes are active at night.4

There isn’t really a day set aside to celebrate mosquitoes, but maybe there should be. There are over 3,550 known mosquito species and only about 200 of these harass humans.5 Of the 112 identified genera of mosquitoes, only nine have been identified as harboring species that carry human pathogens. Eight of these genera (Anopheles, Aedes, Ochlerotatus, Culex, Mansonia,Coquillettidia, Psorophora, and Culiseta) are highlighted in the “Are Mosquitoes as Deadly as They Seem?” infographic. The ninth genus, Haemagogus (not shown), contains 28 species, of which 7 are associated with disease—harboring and transmitting the yellow fever virus.6 Well over 90 percent of mosquito species have no link to human disease.

A fossil of Burmaculex antiquus embedded in Burmese amber dates to the mid-Cretaceous era, indicating that mosquitoes have been around for at least 90–100 million years.7 After millions of years of speciation, they demonstrate extensive biodiversity today. Even though they have been around a very long time, we still have much to learn about mosquitoes. As we continually learn more, the taxonomic status of several mosquitoes have changed over time. This can make it very challenging to stay abreast of which species is which. With so many species to explore, who knows what mosquito-related compounds may be hidden away awaiting discovery for beneficial human use!

But even without such future discoveries, mosquitoes serve significant roles and contribute significant biomass to the global food chain. Mosquitoes have a four-stage life cycle. (See the “Mosquito Life Cycle” image below.) Mosquito eggs and larvae serve as food for many other aquatic larvae, amphibians, and fish. And adult mosquitoes provide food for many amphibians, spiders, lizards, birds, bats, and other insects, such as dragonflies. Mosquito larvae are also filter feeders, playing a critical role in scavenging organic matter from aquatic environments. As larvae consume organic particulates and microorganisms, they recycle organic resources into the food chain. And adult mosquitoes serve as pollinators, critical to flower and plant fertilization, as they feed on nectar. Only adult female mosquitoes from some species bite. They need amino acids present in the blood meal to produce mosquito eggs. Male mosquitoes never bite. 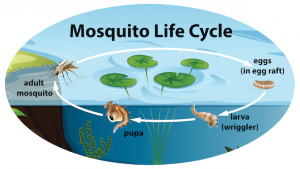 Mosquitoes can be found in very warm climates as well as in cold climates and are an intricate part of Earth’s biodiversity and God’s creation. The vast majority of mosquitoes are beneficial participants in complex ecosystems and play no role in human disease. We really don’t know how eradicating mosquitoes might result in significant unwanted and unimaginable effects on the environment. As scientists and good stewards of creation, we must patiently and diligently look for ways to prevent mosquito-borne diseases while protecting well-balanced ecological systems. One day soon, as we continue to learn more, we might have more to buzz about and even reasons to celebrate mosquitoes on World Mosquito Day!

To discuss more about mosquitoes or mosquito-borne viruses, and to stay current with all my blogs and related science-faith topics, connect with me on Facebook or Twitter.

Did God Create Flesh-Eating Bacteria? A Creation Model for the Origin of Human Disease

“How are flesh-eating bacteria consistent with an all-powerful, all-loving God?” This question was posed to me on a recent episode (January 19, 2010) of...
Biology

Earliest Complex Vegetation and the Bible’s History of Life

A new discovery reveals that complex vegetation appeared much earlier on Earth than previously thought. This discovery, as I will explain, has profound theological...
Biology