Spiritual disciplines are actions we can take that center our attention on Jesus. Many practice the disciplines on a daily basis or at set intervals. They’re great ways of getting our physical bodies, not just our hearts and minds, involved in our spiritual growth. Although some may characterize the disciplines differently, they usually include the following: scripture reading and meditation, prayer, fasting, service, worship, study, silence, and solitude.

Some prefer to call these spiritual practices rather than disciplines. Whatever you call them, practice takes discipline, and these activities contribute to our spiritual well-being, health, and growth. Some disciplines—like meditation, prayer, and fasting—obviously predate Christianity and are present in many other religions. Jesus himself modeled many spiritual disciplines and spoke of others. The Gospels record Jesus rising early in the morning and drawing away to quiet or solitary places for prayer, demonstrating silence, solitude, and prayer. His knowledge of scripture indicated that reading, meditation, and study were central to his life. He also demonstrated and taught the importance of fasting, and in giving thanks and singing hymns, he demonstrated the significance of worship.

The spiritual disciplines have been practiced by Christians since Jesus’s time and remain significant in helping many people maintain a strong foundation in their Christian walk. I became aware of the spiritual disciplines in college when I read a book called Celebration of Discipline by Richard Foster. Scripture reading, prayer, and worship are essential elements in my Christian walk. I can’t imagine a day without prayer and some form of worship. And it doesn’t take a long absence of scripture reading, usually two or three days, before I notice that I’m irritable and something is “off” in my emotions and perspectives. Other disciplines, such as scripture meditation and fasting, have been incredibly beneficial, even though I may practice them at various times and periods of my life rather than regularly implementing them as part of a daily or weekly routine.

Great, but so what? What’s all this got to do with science? Maybe it’s not just the wisdom of Jesus exercised by his followers through the ages pointing us toward spiritual disciplines; maybe science is telling us of their benefits too.

It seems that the disciplines themselves have positive impact, not just for our spiritual well-being but also for our physical and mental well-being. Scientific studies bear this out. Maybe you are aware of studies that have shown clinical improvement in people who receive prayer.1Other studies indicate benefits from personal prayer and meditation and intermittent fasting for mental and physical health.2 Additional findings indicate that volunteering and helping others improves mental outlook and even suggest that practicing the spiritual discipline of service might help alleviate some of the more mild bouts of sadness, apathy, or the misuse of drugs and alcohol.3 Perhaps if these disciplines (prayer, meditation, fasting, and service) were practiced more widely, there would be a reduction in the use of antidepressants and opioids (not to mention other drugs and alcohol abuse) and an overall general improvement in mental health and well-being. Still other studies indicate that yet another spiritual discipline, silence, may also have potential physical benefits.

Noise pollution is stressful, but just how bad it is for our health is hard to measure. Noise is typically regulated at local levels, and most regulations follow EPA-recommended thresholds. Noise can be distracting, disruptive, annoying, and even dangerous. It can interfere with conversation, mental work, and sleep. And prolonged exposure to loud noises can have serious health consequences, including hearing loss and increased anxiety, which in turn can affect blood pressure and heart function.

But studies aren’t just telling us that excessive noise is bad—they’re also telling us that silence is good. Silence, it seems, adds to relaxation, even in small doses. Results from one study suggest that as little as a two-minute silent pause can benefit us by decreasing blood pressure, breathing rate, and heart rate. In this particular study, music type and tempo were being evaluated for their effect on relaxation. Silent pauses randomly inserted into various types of music seemed to relax listeners even more than relaxing music, whether the music segments were short or long, or had a slow or fast tempo.4

This pause and intervention of silence reminds me of a spiritual practice implemented in Benedictine and other monastic communities, known as statio.5 Statio is the practice of pausing during the transition between two activities. By stopping, even briefly, one creates a space, or sacred pause, at the end of one activity before beginning a new one. It may not be silent around you, but in a sense, this intentional pause is a way to silence the constant hum of moving through a busy schedule without thought or awareness of God’s presence. Practicing statio gives us space to be still and know that the Lord is God and is present with us whatever our activities may be. The pause should be one of silence, not filled with conversation, checking text messages, or other distractions. Allow the silence to help still your mind, redirect your focus to Jesus, and strengthen you before you begin again. 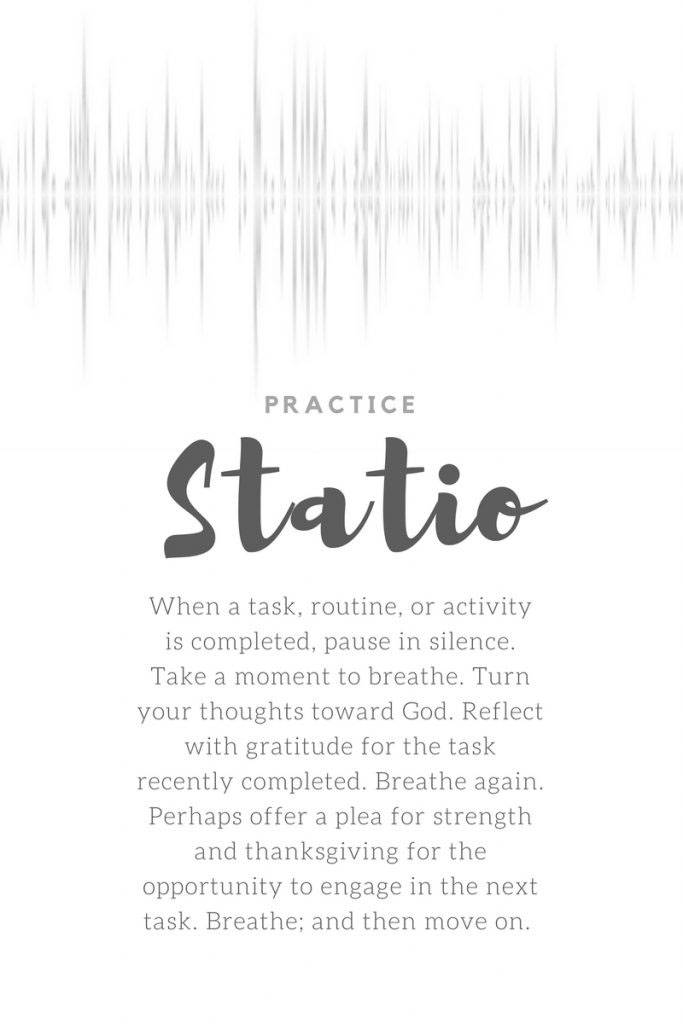 Longer stretches of silence can escort us from sensory-response activities (where our brains can become overwhelmed with sensory input) to the brain’s default mode network. Our brains enter the default mode network as they become disengaged from external stimuli.6 As we turn toward silence and internal cognition, meditation, memory recall, emotional awareness, and daydreaming, our brains can reorganize data and make sense of various things as we step back to reflect in a larger scope and imagine new connections. This type of activity helps us become more self-aware and more empathetic and creative. It actually allows us to recharge before returning to more cognitive sensory-response activities. In addition to helping us relax, reflect, and recharge, silence may also contribute to better brain development.

The generation of new neurons (neurogenesis) in adults is regulated by behavioral activity. Physical activity and exposure to challenging environments can result in the production of new neurons. In a 2013 study, researchers asked whether auditory stimuli could generate neurons as well.7

For three consecutive days, for two hours per day, mice (n = 10 per group) were placed into a sound isolation box. Groups were either exposed to ambient animal house noise, isolation from all sounds (silence), white noise, previously recorded pup calls, or Mozart’s Sonata for Two Pianos in D major, KV 448.

Surprisingly, they found that mice exposed to two hours of silence per day generated significantly greater numbers of precursor cells in the hippocampus (a region of the brain) than did mice exposed to ambient or white noise, or prerecorded pup calls. Mice exposed to Mozart’s Piano Sonata also experienced high levels of newly formed precursor cells. This result was unanticipated, as silence was the control group meant to measure neuron production in the absence of auditory stimuli. Furthermore, continued proliferation of newly generated precursor cells persisted longer in mice exposed to silence than in other groups. And, perhaps most importantly, persistence (survival) and differentiation of new precursor cells to specialized astrocytes and neurons (neural cells) reached significantly higher levels only in mice who experienced silence, and not in mice in the other groups. According to the report, approximately two-thirds of the newly formed cells were neurons, and about 15 percent were astrocytes.

It’s fascinating to think that taking time each day to sit quietly might actually help our brains perform key functions such as pattern separation, or might add flexibility to neural networks for use in situations where novel information has to be integrated into established systems. It will be interesting to see if this finding in mice is indicative of processes at work in the human brain as well. If so, it wouldn’t be surprising to me that periods of silence are good for adult neurogenesis, in light of the benefits to our health and well-being we observe in practicing other spiritual disciplines.

But I wonder if these studies with silence will hold up if applied to the typical contemporary American. My casual (not scientific) observations have been that silence often leads to immediate anxiety in a lot of people. Take away our ability to text, talk, or electronically engage with music, videos, or real people, and many begin to feel anxious, lost, or depressed.

That’s why the spiritual disciplines need to be practiced. With enough practice, we can become adept at these activities and abandon anxiety over engaging in the unfamiliar. For some people, silence (not to mention solitude) can be a bit unnerving at first. Without practice, it will likely not get much easier.

Perhaps it’s not just in the consideration of the origin of the universe, as Robert Jastrow suggested in his book God and the Astronomers,8 but in the realization that prayer, meditation, fasting, service, and silence are good for human flourishing, that scientists scale mountains of ignorance, and, as they are about to conquer the highest peak, they pull themselves over the final rock and are greeted by a band of theologians who have been sitting there for centuries.

Technology begets humility. Just ask my coworker and I how long it took us to sync a new keyboard to my Mac. What should...
Theology

Over the years, I’ve had numerous people express to me that they have experienced a weariness concerning their faith journey. This is actually a...
People

Is Salvation Graspable and Resistible?

At once mysterious and compelling, the question of how human beings obtain salvation and whether they can lose it has preoccupied Christians of all...
Theology