One of my classmates and friends in high school was a kid we nicknamed “Radar.” He was a cool kid who had special needs. He was mentally challenged. He was also funny and as good-hearted as they come, never causing any real problems—other than playing hooky from school, for days on end. Radar hated going to school.

When he eventually showed up, he would be sent to the principal’s office to explain his unexcused absences to Mr. Reynolds. And each time, Radar would offer the same excuse: his grandmother died. But Mr. Reynolds didn’t buy it—for obvious reasons. It didn’t require much investigation on the principal’s part to know that Radar was lying.

Skeptics have something in common with my friend Radar. They use the same tired excuse when presented with compelling evidence for design from biochemistry. Inevitably, they dismiss the case for a Creator by pointing out all the “flawed” designs in biochemical systems. But this excuse never sticks. Upon further investigation, claimed instances of bad designs turn out to be elegant, in virtually every instance, as recent work by scientists from UC Davis illustrates.

These researchers accomplished an important scientific milestone by using single molecule techniques to observe the replication of a single molecule of DNA.1 Their unexpected insights have bearing on how we understand this key biochemical operation. The work also has important implications for the case for biochemical design.

For those familiar with DNA’s structure and replication process, you can skip the next two sections. But for those of you who are not, a little background information is necessary to appreciate the research team’s findings and their relevance to the creation-evolution debate.

DNA consists of two molecular chains (called “polynucleotides”) aligned in an antiparallel fashion. (The two strands are arranged parallel to one another with the starting point of one strand of the polynucleotide duplex located next to the ending point of the other strand and vice versa.) The paired molecular chains twist around each other forming the well-known DNA double helix. The cell’s machinery generates the polynucleotide chains using four different nucleotides: adenosine, guanosine, cytidine, and thymidine, abbreviated as A, G, C, and T, respectively. 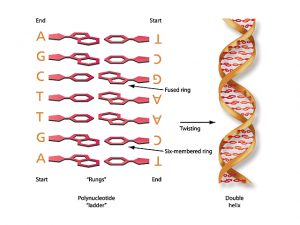 Biochemists refer to DNA replication as a “template-directed, semiconservative process.” By “template-directed,” biochemists mean that the nucleotide sequences of the “parent” DNA molecule function as a template, directing the assembly of the DNA strands of the two “daughter” molecules using the base-pairing rules. By “semiconservative,” biochemists mean that after replication, each daughter DNA molecule contains one newly formed DNA strand and one strand from the parent molecule. 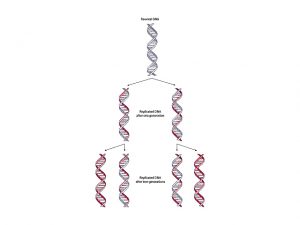 Conceptually, template-directed, semiconservative DNA replication entails the separation of the parent DNA double helix into two single strands. By using the base-pairing rules, each strand serves as a template for the cell’s machinery to use when it forms a new DNA strand with a nucleotide sequence complementary to the parent strand. Because each strand of the parent DNA molecule directs the production of a new DNA strand, two daughter molecules result. Each one possesses an original strand from the parent molecule and a newly formed DNA strand produced by a template-directed synthetic process. 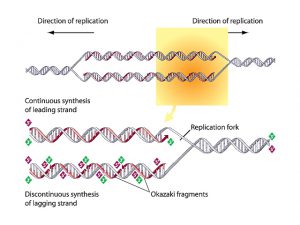 DNA replication can only proceed in a single direction, from the top of the DNA strand to the bottom. Because the strands that form the DNA double helix align in an antiparallel fashion with the top of one strand juxtaposed with the bottom of the other strand, only one strand at each replication fork has the proper orientation (bottom-to-top) to direct the assembly of a new strand, in the top-to-bottom direction. For this strand—referred to as the “leading strand”—DNA replication proceeds rapidly and continuously in the direction of the advancing replication fork.

An ensemble of proteins is needed to carry out DNA replication. Once the origin recognition complex (which consists of several different proteins) identifies the replication origin, a protein called “helicase” unwinds the DNA double helix to form the replication fork. 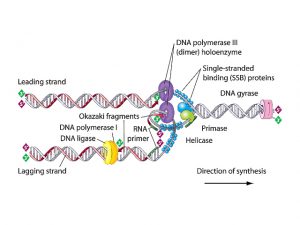 Once the replication fork is established and stabilized, DNA replication can begin. Before the newly formed daughter strands can be produced, a small RNA primer must be produced. The protein that synthesizes new DNA by reading the parent DNA template strand—DNA polymerase—can’t start production from scratch. It must be primed. A massive protein complex, called the “primosome,” which consists of over 15 different proteins, produces the RNA primer needed by DNA polymerase.

Biochemists had long assumed that the activities of the leading and lagging strand DNA polymerase enzymes were coordinated. If not, then DNA replication of one strand would get too far ahead of the other, increasing the likelihood of mutations.

According to the researchers, this discovery is a “real paradigm shift, and undermines a great deal of what’s in the textbooks.”2 Because the DNA polymerase activity is not coordinated but autonomous, they conclude that the DNA replication process is a flawed design, driven by stochastic (random) events. Also, the lack of coordination between the leading and lagging strands means that leading strand replication can get ahead of the lagging strand, yielding long stretches of vulnerable single-stranded DNA.

Even though this latest insight appears to undermine the elegance of the DNA replication process, other observations made by the UC Davis research team indicate that the evidence for design isn’t diminished, just displaced.

It is remarkable how two people can see things so differently. For scientists influenced by the evolutionary paradigm, the tendency is to dismiss evidence for design and, instead of seeing elegance, become conditioned to see flaws. Though DNA replication takes place in a haphazard manner, other features of the replication process appear to be engineered to compensate for the stochastic behavior of the DNA polymerases and, in the process, elevate the evidence for design.

A team of American earth scientists has found yet more fine-tuning for one of the design features for sustaining life on Earth. A stable,...
Biochemistry

Not Too Tart, Not Too Sweet: Fine-Tuned Gene Expression of Lamin Provides Evidence for Design

I live in a city in Southern California historically known for its lemon groves. Each spring the community celebrates its history with The Lemon...
Biochemistry

A Biochemical Watch Found in a Cellular Heath

Suppose I discover a Rolex™ watch lying on the sidewalk in front of the Reasons To Believe offices. Without hesitation I would pick it...
Biochemistry