It’s the day Twilight fans around the country have been dying for. Some have squirmed and squealed—with Team Edward or Jacob shirts at the ready—for the long awaited 12:01 AM premiere. (Count me in that group!) Others have had the willpower to hold off ’till daylight. Whichever camp they’re in, Twilight fans are salivating over New Moon, the latest film adaptation of Stephenie Meyer’s bestselling saga.

But Meyer’s vampiric phenom is more than just a story about an average teenage girl and her vampire boyfriend. Delicately woven in the pages of her books (and to some degree on film) are themes like sacrifice, abstinence, and resisting temptation. (An active member of The Church of Jesus Christ of Latter-day Saints, it’s reasonable that Meyer’s faith would spill onto the pages of her novels.) 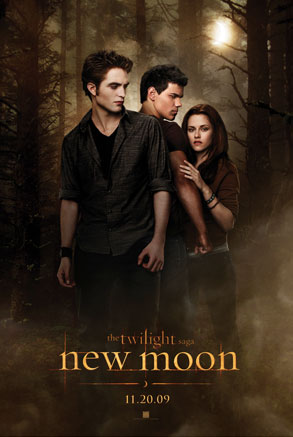 The second venture in the Twilight saga, New Moon continues the story of Bella and Edward. Unlike most vampires, Edward and his adopted family (the Cullens) resist their natural instinct to prey on humans. Instead they survive on the blood of animals. (Edward also avoids anything more intimate than a long kiss from his human girlfriend—a comforting point for wary parents.)

In this film, Bella finally begins to grasp how difficult it is for her boyfriend’s family to fight against their instinct. At her own birthday party, Bella (a colossal klutz) draws blood after she cuts her finger while unwrapping a gift. No biggie—unless you’re hanging out with bloodthirsty vamps. The scent of human blood proves too much for Edward’s brother Jasper, still new to the “vegetarian” diet, and he nearly attacks Bella. Even the other Cullens have to leave the room.

The only one able to withstand the urge is Carlisle, leader and father-figure of the group. After Bella considers “the years of struggle and self-denial” Carlisle must have endured to get to where he is scarcely enticed by human blood, she turns to him and asks, “Why did you even try a different way than the obvious one?”

Somewhere between killer vamps and a killer soundtrack, the tale of the age-old human predicament unfolds.

Humans are given the choice to either resist or fully succumb to the natural instinct to sin. It takes great restraint, and these days it seems self-denial is a lost art. But, as Carlisle speculates, “abstaining makes it easier for us to be civilized, to form bonds based on love rather than survival or convenience.”

Though not a Twilight fan, RTB philosopher/theologian Kenneth Samples agrees with this assessment and adds something more to the topic:

“First and foremost…sin negatively affects a person’s relationship with God. It produces discord and disconnection. However, sin also impacts relationships with one’s self, with other people, and to some extent even with nature….The sinful nature produces spiritual blindness, enslavement to moral corruption, hardness of heart, lawlessness, and subsequently physical and spiritual death (Rom. 1:18–21; 5:10; 6:17; 8:7; 2 Cor. 4:4; Eph. 2:1–3; 4:11–19).”

Giving in to our sin nature kills the spirit and leaves countless victims. But the longer we work to abstain from our natural instinct, the more likely we’ll remain steadfast to living the life God’s called us to.

As Ken writes in Without a Doubt, “True liberty must come in redemption from sin, and that redemption comes uniquely in the saving work of Jesus Christ. Only in Christ are human beings free from the devastating consequences of sin and thus free to obey God rather than their sinful nature.”

It may take years of perseverance before we can face temptation without a huge struggle, but “God is faithful; he will not let you be tempted beyond what you can bear.”

Check out these resources for more on the human condition and God’s response to it.

“Evil and Suffering in light of God’s Love and Power”

“What in the World Is a Worldview?”

Also, see chapter 11 of Kenneth Samples’ book Without a Doubt and chapters 10–12 of Hugh Ross’s book Why the Universe Is the Way It Is.

A Look Back at RTB’s Cruise Conference, Part 3

In parts 1 and 2 of this series Fuz Rana, Hugh Ross, and Jeff Zweerink recounted their experience on RTB’s Cruise Conference. This time...

Ice and snow could not stop the RTB Ottawa chapter from enjoying the warmth of fellowship during the very first Connection Point! In Canada’s...

I’m convinced our neighborhood garbage men have “nap detectors” on board their trucks. They show up when, and only when, my daughter is napping....