It must have been like a scene from an Indiana Jones movie. Late 1947, in the dry, dusty cliffs around the northwest corner of the Dead Sea, a Bedouin youth scrambles up the hillside in search of a stray goat. What he finds instead is a cave containing several old clay jars and ancient parchment scrolls. The shepherd wonders if the scrolls might fetch a good price in the nearby towns—little does he know that he is holding an artifact of immense religious and historical value.

The Dead Sea Scrolls stand as a demonstration of the faithful accuracy with which the Hebrew Scriptures have been passed down from antiquity to today. Written between 300 BC and AD 100 (probably by a group of desert-dwelling Jews called the Essenes), these scrolls contain, among other writings, the oldest known copies of the Old Testament. All 39 books of the Old Testament are represented in the scrolls, with the exception of the book of Esther.

A wealth of history

In an effort to bring modern people into contact with a priceless slice of history, Azusa Pacific University, a private Christian college in Southern California, has put together an impressive collection of scroll fragments and other rare artifacts. The display is housed in Hugh and Hazel Darling Library on the school’s West Campus. 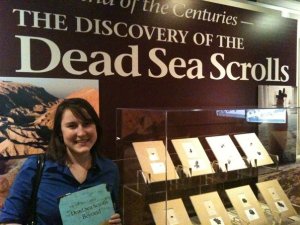 “Treasures of the Bible: The Dead Sea Scrolls and Beyond” takes visitors on a tour of the Bible’s survival. The amount of history crammed into the relatively small space (it’s housed in what is usually a computer bay) is astounding. In addition to several scroll fragments, the display includes a leaf from a Gutenberg Bible, five first edition King James Bibles, a leaf from the first English Bible printed in America, and much more.

During my visit to the exhibit, APU Public Relations Manager Allison Oster explained that many of the artifacts on display were “previously in private collections and the university wanted to make them available to the public.” The university hopes the exhibit allows people to connect with history and, in particular, allows Christians to connect with the history of their faith.

For the university itself, this presentation of precious artifacts helps increase its authority in biblical studies. It also provides APU faculty and students with research opportunities. Matthew Sperrazza, a grad student at APU’s C. P. Haggard School of Theology, says, “I was really excited to see the Dead Sea Scrolls. In recently starting my degree in pastoral studies, my interest in ancient biblical artifacts has greatly increased. I felt that the Lord had given me a great opportunity to get up close and personal with the Scripture that he sent us.”

For Sperrazza, the most significant artifact outside of the scrolls is the Gutenberg leaf. He explains, “The Gutenberg Bible marked the beginning of a new era of mass printing of the Bible, making the Word of God available to more people than ever before.”

Indeed, the story of the Bible’s journey from parchment scrolls readable only by trained scholars to an easily accessible book for all people is a dramatic one. The English Bible has an especially turbulent history. As the exhibit’s souvenir booklet explains,

Complete Bibles in the English vernacular undermined the exclusive prerogative of clergy as the qualified and authorized interpreters of Scripture. Moreover, the Roman Catholic Church regarded some of the principal translators as guilty of heresy.

People like John Wycliffe and William Tyndale suffered intense persecution—and in the latter’s case, martyrdom—for daring to translate the Bible into English. Fortunately for us, they made the sacrifice.

The role of the scrolls

Following my tour of this amazing exhibit, I had questions. For example, if the Dead Sea Scrolls were only just discovered in the late 1940s, how can we be sure the Bibles printed prior to that time, including those on display at APU, were reliable? Krista Bontrager, theologian and dean of online learning at RTB, took time to address my concerns.

As Krista explains, before the scroll discovery, the oldest known Old Testament copies had been written around AD 1000, putting at least 1,000 to 1,500 years between them and the autographs (original manuscripts).

“Generally, the school of thought is that the older a manuscript is, the closer it is to the original autograph, the more accurate it is,” says Krista.

So when compared to the scrolls, did the accuracy of the medieval copies hold up?

“Yes, that’s the great thing about the scrolls. What they’re telling us is that the Scriptures we’d been using were 97–99% accurate,” says Krista. “[The scrolls] really did provide a powerful check of the accuracy of the Scriptures as they had been handed down.” What errors did occur in the medieval copies were of a minor degree, such as spelling mistakes. The scrolls effectively challenged skeptics’ and other religious groups’ accusations of corrupt translation.

But how about the accuracy of the New Testament?

So there the point is you have much closer proximity between the original autograph and the earliest copies. The closer you are between those two events the thought is the less time there is for corruption to creep in.

But that’s what makes the scrolls so remarkable. Even when we had over a thousand years, possibly upwards of 1,500 years, between the original manuscripts and the copies, [the copies] were still 97–99% accurate.

For comparison, Krista points out that we have only seven or eight copies of Plato’s writings, all produced approximately 1,200 years after the autographs. The same applies to other ancient authors’ works, such as Aristotle’s, Sophocles’, Euripedes’, and others’. It follows, then, that if we give credence and respect to the works of Plato, we can certainly give the same to the Judeo-Christian Scriptures.

“Treasures of the Bible: The Dead Sea Scrolls and Beyond” is open until July 18. If you live in the area or will be visiting in the next 18 days, I’d highly recommend taking time to visit APU to see this remarkable exhibit. For exhibit hours and ticket information, visit www.apu.edu/deadseascrolls/visit/.

I asked Krista for some good resources on biblical inerrancy and here’s what she recommends:

And for a good RTB source on the viability of Christian claims, check out Kenneth Samples’ A World of Difference: Putting Christian Truth-Claims to the Worldview Test.

A Trip to Hell with Screwtape

In describing the process of writing The Screwtape Letters, C. S. Lewis said, “I never wrote with less enjoyment . . . The work...

Another October has come to a close and tomorrow night neighborhoods will come alive with trick-or-treaters on their annual quest for candy. Whether you...

A recent 60 Minutes broadcast provided an illuminating glimpse into the global “war on terror.” The April 25 episode included a provocative segment on...
Worldviews