Choosing not to believe in the devil won’t protect you from him.

Four years of seminary and one step from becoming a priest, Michael reveals he doesn’t believe in God. Before he can walk away, he’s asked to train with senior exorcist Father Lucas—and to view firsthand the darker side of his faith. 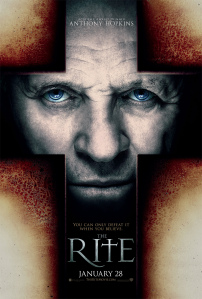 The Rite, which hits theaters today, follows Michael’s struggle through his own doubt as he’s assigned to help cast out demons he doesn’t believe exist. Soon Michael is standing watch as Fr. Lucas attempts to exorcise a demon from a young, pregnant girl. Though she shows signs of possession (knowing the unknowable, speaking in foreign languages, having dramatic change in vocal intonation), Michael attributes these signs to severe psychosis. “She doesn’t need a priest,” he says, “she needs a shrink.”

His response might be similar to how others respond to claims of demonic possession—It must be due to some kind of mental illness. Or in response to a traumatic event. There has to be a natural explanation. In a culture where natural explanations reign supreme, even some Christians find themselves less inclined to “go there”—meaning use words like “Satan” and “devil.”

The knee-jerk reaction is to doubt the legitimacy of so-called demonic activity and to question whether the person making the claim is willfully (or perhaps unintentionally) over-spiritualizing something natural or neutral. The delicate over/under dance is difficult to follow. Spouting supernatural hyperbole is ill-advised. Yet erring too much on the other side is tricky, too—maybe even dangerous. How do believers balance between supernatural and natural?

Though Michael is quick to discredit anything considered supernatural for lack of proof, Father Lucas, remains unfazed. “You know the interesting thing about skeptics is that we’re always looking for truth. The question is what on earth would we do when we find it?”

For Michael and the rest of us, proof is useful only when something is done with it. In the case of supernatural evil, our response to its existence is to guard, cherish, and defend our souls. The movie’s tagline makes it clear why: You can only defeat it when you believe in it.

Want to delve into the topic of the problem of evil? Check out these resources by RTB’s philosopher/theologian, Ken Samples:

Without a Doubt, chapter 19

God’s Threefold Will for Us (Especially When Times Are Tough)

Over the last several months I have been praying for a number of my friends who are either battling life-threatening illnesses themselves or have...
Theology

Why I Blog at “Theorems & Theology”

I blog for two purposes: to spur on thinking (mine & yours) and to pursue truth (together). Science and Scripture both reveal the truth...
Theology

3 Ways to Be a Gracious Christian Sports Fan

I have enjoyed playing and watching sports most of my life. Now that I’m sixty years old I sometimes think back to my time...
Theology