My husband and I love watching Iron Chef America, the Food Network show where top-notch chefs go toe-to-toe in an 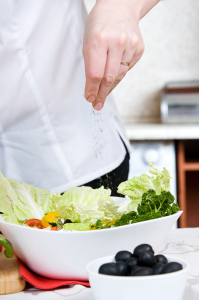 hour-long culinary battle.It’s particularly fascinating to watch the competitors deal with a “secret ingredient” that forces them to think outside the box of their expertise. A French-trained chef might play with Asian flavors or an Italian-trained chef might find inspiration in the foods of the American Southwest. The results are intriguing cross-cultural cuisine fusions.

Fusion (or integration) is also a vital part of building a well-rounded and solid position in the realm of science-faith debates. Like the cooks competing on Iron Chef America, scientists often focus on highly specialized fields. This is good for research, but not so helpful when taken out of the laboratory and into the science-faith arena. Without knowledge of other disciplines, evolution proponents can end up building lopsided cases for their worldview.

In his book A World of Difference, philosopher Kenneth Samples notes that, among other things, a solid worldview must have explanatory power and scope. He writes, “An adequate belief system explains a broad range of data.” Within the science-faith discussion, a worldview needs to account for the data from myriad disciplines, not just biology.

Biochemist Patricia Fanning realized the importance of integrating across fields of study, both for her own worldview and for others’. She explained in a personal conversation:

I never believed in evolution even before getting to know RTB. But I didn’t have a sound intellectual basis for that feeling—now I do. If you want to actually understand the arguments for or against evolution, you have to go across scientific disciplines. The theory of evolution has to fit with all the sciences.

For example, Patricia believes it’s helpful for biology students, particularly those focusing on evolution, to be acquainted with planet and solar system formation. Why? Our own solar system’s formation impacted (literally) Earth’s initial conditions, making them radically different from the current state. A good understanding of the origin of life requires knowledge of these initial conditions.

But evolutionists aren’t the only ones who need to integrate. Viable creation models must also cover a “broad range of data.” RTB founder Hugh Ross applies constructive integration to Scripture as well as science. Genesis doesn’t have a corner on creation accounts; there are over 20 creation texts scattered throughout the Bible. That’s why Hugh’s latest book focuses on Job.

This is a lot of stuff to take into consideration when evaluating a stance on evolution and creation. But I think a good worldview needs to be like a good chef. Great cooks continue to stretch and grow their abilities, with openness to challenges and a willingness to adapt and master new techniques. That’s how they stay at the top of their game. Similarly, a good worldview needs room to adjust, grow, and integrate.

Resources: Need help evaluating your worldview? Check out Ken’s book A World of Differencefor nine ways to test your thinking.

World Religions: The Prophet and the Son of God

Topping my 2015 to-do list is writing my latest book, which will compare and contrast Jesus Christ with the leaders of other major world...
Worldviews

Several years ago, a colleague and I were discussing the writing of a computer program we planned to use for processing our radio astronomy...
Worldviews

While the traditional elements of Catholicism, Protestantism, and Orthodoxy hold much, if not most, in common—at least doctrinally speaking (reflected in the ancient ecumenical...
Theology