What was the first thing I did after getting home from seeing The Social Network? That’s right—I checked my Facebook page. 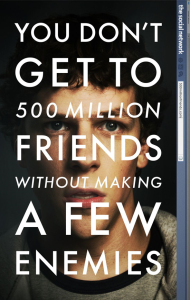 Current box-office leader The Social Network* recounts the creation and rise of Facebook. With savvy scripting, sharp direction, and outstanding performances, the film illuminates the irony that even as Harvard undergrad Mark Zuckerberg(Jesse Eisenberg) created the culture-changing network site that connects millions of people, he was destroying his own personal relationships.

I took the film’s portrayal of brilliant-but-socially-inept Zuckerberg with a grain of salt—one can never trust Hollywood to get things totally right. Nevertheless, the story was a compelling one. It’s all about relationship—the thirst for connection, inclusion, and acceptance, the pain of betrayal, exclusion, and rejection, the tug-of-war between friendship and ego, all the things on which Facebook itself pivots.

So what do relationships have to do with apologetics? Everything.

Christian apologetics, theology, philosophy, logic—the concepts we deal with daily at RTB—build intellectual knowledge and understanding of God and his Word and world. But RTB’s goal is more than simply “bridging the (perceived) gap between science and faith”—our hope is that the intellectual understanding will lead people to deeper friendships with one another and, most importantly, a growing personal relationship with Jesus Christ. Without that relationship, the understanding is useless.

On the other hand, some believers prefer to dismiss the intellectual and academic nature of apologetics altogether. They view it as cold and impersonal—they’d rather invest in the relationship side of faith. But we all need both.

And if Christ has not been raised, your faith is futile; you are still in your sins. Then those also who have fallen asleep in Christ are lost. If only for this life we have hope in Christ, we are to be pitied more than all men.

In other words, if the foundational doctrines upon which we build our relationship with Jesus are false, then we are pathetic losers. So how can we trust in the Bible’s declarations? Through apologetics, philosophy, exegesis, hermeneutics, etc. These disciplines allow us to “test everything” and “hold on to the good.” Apologetics and all its disciplines lend credibility and reliability to the relationship.

In his book A World of Difference, RTB philosopher/theologian Kenneth Samples provides guidelines for testing the validity of worldviews, including Christianity. Not only must a good worldview be logically sound, Ken says, but it must also fulfill “real human needs, desires, and aspirations.” Christianity does so, he explains, by offering “an intimate, redemptive relationship with the God who came to Earth in the person of Jesus Christ…he came to reconcile lost sinners separated from a holy God.”

John 3:16 really does say it all: For God so loved the world that he gave his one and only Son, that whoever believes in him shall not perish but have eternal life.

Talk about sending out the ultimate friend request!

Resources: A World of Difference is available for purchase from our web store.

*For those of you wondering, The Social Network is an excellent film; critics are calling it the Citizen Kane of this generation. It does, however, very much earn its PG-13 rating for language and sexuality. So you may want to use discretion if taking kids to see it.

Does Faith Support or Hinder Reason?

In the April 2008 issue of Nature, an essay by Philip Ball explains how, in his view, modern science began “in the twelfth century…several...
Worldviews

Disney’s TRON Legacy opens in theaters today. It’s been 28 years since the original debuted. For its time, TRON was an astounding breakthrough in...
Worldviews

The anthropic principle faces serious challenges from outside the disciplines of astronomy and physics. Many scholars in the humanities and social sciences fear that...
Evolution