There he stood, perched on a box, shouting questions and clenching dollar bills. Curious San Diegans circled ‘round, eager to earn a buck in exchange for a correct answer.

Comic-Con was in full swing and so, too, was the influx of corporations and vendors with mountains of swag to unload on attendees. The only thing unclear about the guy on the box was which company he represented.

“What’s this?” I whispered to an observer.

The guy on the box—wrongly presumed to be Ray Comfort because of his similar tactics—asked a few simple trivia questions before getting to the five dollar question. That got the crowd’s attention.

“Who here is a good person?” he asked. A few raised their hands. “I don’t want a Christian,” he clarified, “I want a good person.”

A young man left his hand up and was selected to take a stand on the box across from the preacher’s. Soon the eager look on the young man’s face melted into humiliation as he became the center of a public lecturing.

You say you’re a good person but have you ever lied?

And what do you call people who lie?

So what are you? 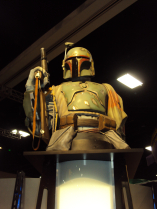 By the end of the lecturing, the volunteer was forced to call himself a liar, a thief, and an adulterer. The five dollars hardly seemed worth the ridicule.

The only thing sadder than the look on the young man’s face is the fact that, by the end of the encounter, he was likely dissuaded not persuaded. The preacher’s intent was muddled by his antagonistic rhetoric—a fact that is seen too often within the church and with well-meaning believers.

Logos is the content, what apologists consider as the “guts” of the message. This is the inner coherence of arguments and counter arguments….Pathos is an appeal based on emotion. Often this takes the form of stories, metaphors, and illustrations that tug at the listener’s heart. The third element is ethos, which refers to the credibility and character of the communicator.

A look back at Aristotle’s words drives home the point:

But rhetorical persuasion is effected not only by demonstrative but by ethical argument; it helps a speaker to convince us, if we believe that he has certain qualities himself, namely, goodness, or goodwill towards us, or both together.

We find a similar sentiment in 1 Peter 3:15 “…Always be prepared to give an answer to everyone who asks you to give the reason for the hope that you have. But do this with gentleness and respect.”

The leadership team at RTB recently reaffirmed the core values that motivate our mission, and 1 Peter 3:15 serves as a key component to two of those values.

Whether making a case for belief over disbelief or Marvel over DC, a master in the art of rhetoric will find balance among the three modes of persuasion. For over 25 years, our team of scholars have worked to masterfully maintain a balance among these three modes, and I’m grateful. For a ministry to conduct itself otherwise seems counterproductive, at best.

We all know people who tend to deplete our reserves of patience and good will. (Perhaps we’ve even been one of these folks.) I’ve...
Theology

Internet Too Slow? We’ll Get Some Bees Right on That!

Perhaps you don’t instantly recognize the connection between the Internet and honeybees. But researchers from the Georgia Institute of Technology (where the school mascot...
Theology

How the Trinity Shows God’s Love

Arguably one of the most important teachings in the Bible is the proclamation that “God is love,” which is found in verses like 1...
Theology